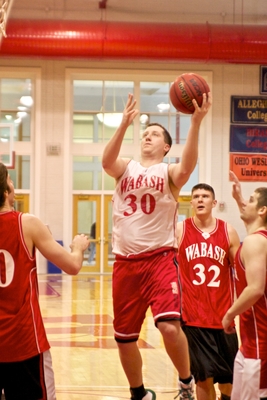 Shawn Tabor with the left-handed move to the basket at the 2010 Alumni game on Chadwick Court.

Shawn Tabor ’96 will be honored by the New Castle High School [Indiana] boys’ basketball program at a banquet on December 9.  Shawn is a member of the New Castle Silver Anniversary Squad for the 1991-92 team, one of four seniors in 1992 who will be recognized for their contributions to the team.  Click here for the press release.

At Wabash, Shawn was a three-year starter for the Little Giants, with 1,111 career points, and connected on 101 three-point baskets.  After graduation he played briefly in Europe.  In May 2016, Shawn was inducted into the Montgomery County Basketball Hall of Fame.