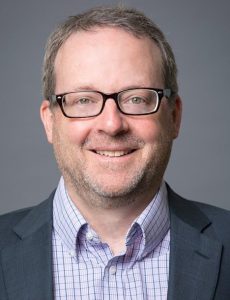 Geoff Coates is one of 155 new members elected to the National Academy of Inventors. The 2017 NAI fellows will be inducted April 5, 2018 at the NAI annual conference in Washington, D.C.

Geoff’s teaching and research interests involve science at the interface of organic, inorganic and materials chemistry. The broader impacts of his research include benign polymers and chemical synthesis, the use of renewable resources, and economical energy storage and conversion. The Coates Research Group focuses on the development of new synthetic strategies for producing polymers of defined structure. His group’s recent work offers a new approach to recycling plastic.

He is co-founder of Novomer, which produces high-performance, cost-effective and environmentally responsible polymers and chemicals, and Ecolectro, which develops and manufactures enhanced polymers for clean energy, chemical and water applications. Both companies are founded on his Cornell-developed technologies.

Following his 1989 graduation from Wabash, Geoff received his doctorate in organic chemistry from Stanford University, then joined the Cornell faculty in 1997 following postdoctoral studies at Caltech. In 2008, he was named the Tisch University Professor in the Department of Chemistry and Chemical Biology at Cornell.

Following seven years representing defendants in white-collar criminal cases, David Hensel ’79 and Linda Pence announced the decision to dissolve PenceHensel LLP. Andy Hull, a Hoover Hull Turner partner, said of David’s move “From our point of view, this is a perfect match.  We have long respected David’s abilities and experience, and we are now proud to name him as our newest partner.”  David adds to Hoover Hull’s depth in representing businesses in complex civil litigation, including federal and state regulatory matters.  Indianapolis Business Journal

It began with feeding a hungry child in Mexico in 1992, and grew into a mission to provide educational opportunities across the globe. Bill Cook ’66 has travelled to 20 countries in the past two and a half years, stopping where he is needed most, looking for ways to help children obtain an education––whether that means building a school, supplying books or clothes, working to change a policy, or providing food and housing so the children can focus on their education.  Bill Cook is changing lives.  Read more about Bill, and the Bill Cook Foundation

“Ethan Roe was awarded the prestigious Harvard Club of Boston 2017 Excellence in Teaching Award from the Harvard Club of Boston at a celebratory breakfast at the Club on October 4, 2017. At the breakfast over 200 student winners were recognized and awarded the Harvard Club’s Prize Book Award. The teachers selected for this award are recognized for their ability to inspire curiosity and excellence among their students and to perform their role daily in a manner that is clearly above and beyond the call of duty.

Some impressive highlights of Mr. Roe’s teaching career include his role as Chair of the Math Department at Blackstone-Millville Regional High School.  BMRHS is a public high school with approximately 415 students serving the towns of Blackstone and Millville.  Ethan is a graduate of Wabash College and holds a Master of Arts in Teaching Mathematics from Providence College.  He is in his 21st year of teaching at Blackstone-Millville.  Among other classes, Ethan currently teaches both AP Calculus and AP Physics.

Ethan was raised in Rhode Island and now resides there with his wife and two sons.  Prior to this year he served as the varsity boys basketball coach for 15 years.  Earlier in his career he also coached the girls track team for 8 years.

In addition to his amazing teaching career, Ethan is the Assistant Director at Camp Ruggles; Rhode Island’s only therapeutic summer day camp program for children diagnosed with emotional and behavioral disabilities.  Ethan has been working at Camp Ruggles for 13 years.”