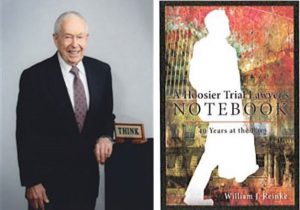 Bill graduated from the University of Chicago Law School in 1955. Following his service as a Sergeant in the Fifth Army Headquarters in Chicago, he joined the Barnes & Thornburg law firm, where he would stay for four decades. During that time, he helped build the nationally recognized firm into one of the hundred largest law firms in America today.

Scheduled to be released in spring 2019, Bill’s new memoir titled “A Hoosier Trial Lawyer’s Notebook: Forty Years at the Bar in Indiana” covers a wide range of issues and stories from the world of plaintiffs, defendants, juries, and judges.