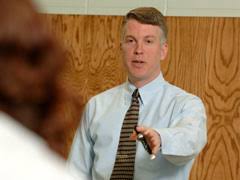 The University of Evansville has announced the investiture of Robert Dion as the newest holder of the Ingleheart Chair in Political Science. Robert is the chair of the Department of Law, Politics, and Society in the William L. Ridgway College of Arts and Sciences. He has taught American politics at the University since 2001. Following his 1985 graduation from Wabash, he earned a master’s degree in American Politics from the University of Michigan and his doctorate from Indiana University-Bloomington.

The Austin Ingleheart Chair in Political Science was established to promote the study of government, particularly local government and political science. The chair is awarded to a faculty member who has demonstrated an understanding of the importance of teaching excellence in the field of political science.