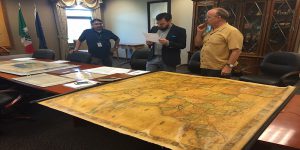 The Western History Association’s Autry Public History Prize is awarded annually to media exhibits, public programs, or written works that contribute to a broader public reflection and appreciation of the past or served as a model of professional public history practice in the history of the North American West. This year, the award was given to the creators of the “Utah Drawn: An Exhibition of Rare Maps” exhibit, including Travis Ross ’06.

“This exhibit began with the desire to build a public history and art exhibit around a core collection of rare maps assembled by the local businessman Steve Boulay. On their own, Steve’s collection told a visually compelling story about the cartographic history of western North America, but especially of the region that became Utah”, says Ross. “Utah Drawn uses the familiar and visually-interesting form of the map––which purports merely to tell the truth––to explore all the ways that ostensible facts like place names and special relationships are actually perspectives determined by political control, economic interests, and cultural assumptions.”

Following his 2006 graduation from Wabash, Travis earned a PhD in History from the University of Utah. Travis is currently a lecturer at Yale University.