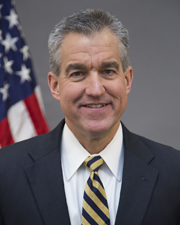 The Senate confirmed Josh to be the U.S. Attorney for the Southern District of Indiana in October 2017.