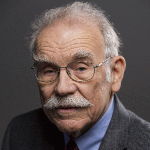 John Mikesell ’64 has been honored by the Tax Foundation for Outstanding Achievement in State Tax Reform.   The Tax Foundation is the premier nonpartisan research organization working for reform of tax systems in the United States.  Click here for the news release.

John retired in 2016 as professor at Indiana University’s School of Public and Environmental Affairs.  The tenth edition of his widely-cited textbook Fiscal Administration will be released in 2017.