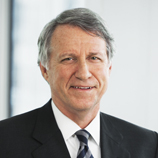 Dan is a Shareholder with Winstead law firm in Dallas, Texas, where he is a member of the Finance and Banking, and Energy Lending practice groups.