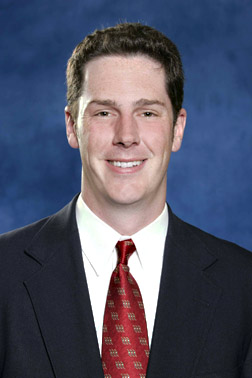 Sam McCrimmon ’99, currently at University of Pittsburgh Medical Center (UPMC) Health System, has been selected to lead The University of Toledo’s Advancement Division, pending approval of UT’s Board of Trustees.  Click here to read the news release.

Sam’s fundraising fundraising career began at Wheeling Jesuit University and he served as director of programs for the Executive Service Corps of Western Pennsylvania. In 2004, he joined the University of Detroit Mercy, where he advanced to leading the major and planned gift programs, providing strategic direction that resulted in record fundraising in fiscal 2010-11. He joined the UPMC Health System in 2011 and has overseen growth both of fundraising and infrastructure.

After Wabash, Sam earned a juris doctorate from the University of Detroit Mercy School of Law and a master of theological studies degree from Duke University.

Photo courtesy of
University of Toledo.