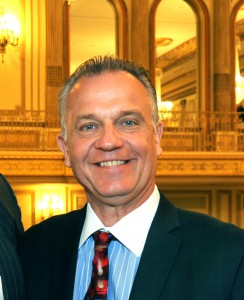 He is presiding judge, Circuit Court of Cook County, supervising judges and oversees the court operations for 35 municipalities and 15 other governmental agencies. He was first elected to the bench in 1992, and re-elected to three consecutive terms in 1998, 2004 and 2010. Judge Jagielski has served in various capacities within the judiciary. He rewrote the Judge’s Jury Trial Book for DUI cases when in the Traffic Division. He wrote a Judge’s Jury Trial Book for Involuntary Admissions and/or Involuntary Administration of Psychotropic Medication cases and the Election Law in 1975, Jagielski was a teacher and football coach at St. Rita High School. He attended The John Marshall Law School as an evening student and graduated in 1981. Among his honors are the President Award from the Advocates Society in 2011 and the Jurist of the Year Award in 2013 from the Southwest Bar Association.