“The picture was taken last month during the Bush Center’s W100 event held at President Bush’s ranch in Crawford, TX.  I volunteered at the event this year along with a couple of other guys from Amarillo (the W100 event was held in Amarillo and nearby Palo Duro Canyon 2 years ago, which is how we got involved with it as part of the organizing and planning committee.)  On the particular day that the photo was taken, I rode my bicycle with the lead group of wounded vets and President Bush and I assisted the vets along the trail.  I was really fortunate to be involved and included in the event.  Here is the link to the event, which gives you an idea about its purpose:http://www.bushcenter.org/military-service-initiative/w100k

One quick story:  2 years ago when the event was here in Amarillo I rode the trails just ahead of President Bush and the group…my job that day was to clear the trail and alert the other volunteers that the riders were on their way.  I stayed ahead of the group, but stopped at an aid station to wait for the group to get some water.  President Bush decided not to stop, though, so I had to ride past him to get ahead on the trail.  As I passed him he noticed my Wabash cycling clothing, which has a big “W” on the back of my shorts.  He started laughing and said to the riders around him “Look at that, he’s got a ‘W’ on his butt!”  Everyone, including me, thought it was pretty funny.

As a side note, I always wear my Wabash clothing when I ride my bike or do any races.  It’s highly visible and unique.  I actually just wore my Wabash gear 2 weeks ago at an ironman race in The Woodlands, TX, and several people shouted out “Go Wabash” throughout the day.”

Thanks for caring Gary Paul and thanks for sharing Mike! 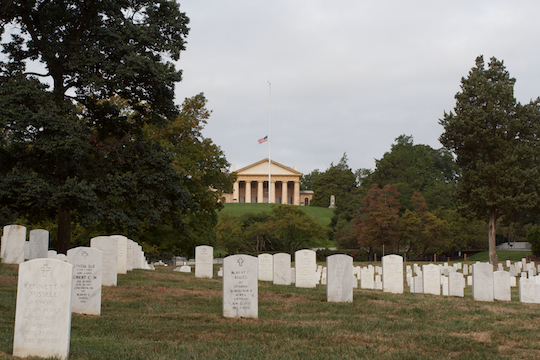 Wabash men have a long and distinguished history of service to our Country.  500 alone in the Civil War.

All of those tombstones at Arlington represent a person who set everything else aside to answer a call.  We can debate all we want the right or wrong of the call – but we can not ignore the sacrifice or the dedication and service of those who answered the call and paid the ultimate sacrifice.

They weren’t second class citizens…they weren’t people who couldn’t find something proper to do…they were just like you and me…and they cared about you and your future.

We are free today because… 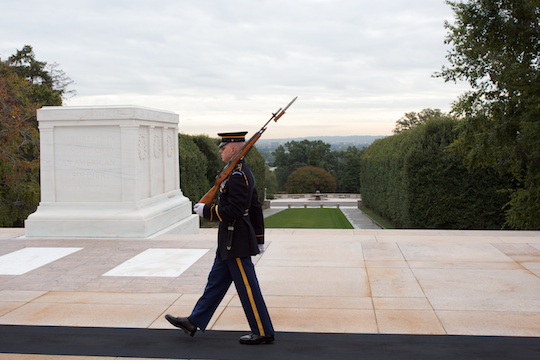 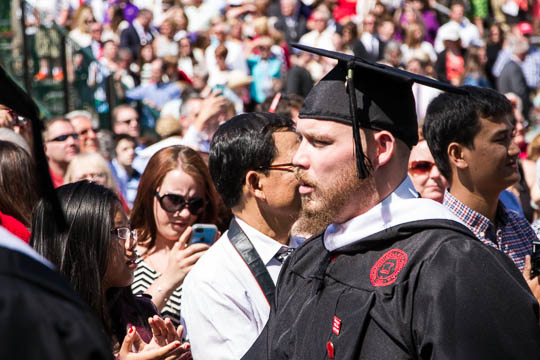 Nate Scola, standout linebacker for the Little Giants, graduated last Sunday.  The football fan in me wonders the same thing that I do every year.  Who will step up and take Nate’s place? More importantly, can they dominate the way Nate dominated?

At that point, I reassure myself that the team will be fine.

But this isn’t about football…it’s about Nate as scholar-athlete.  You see, Nate graduated with Honors Sunday.  He has a couple of extra Latin words on his sheepskin I still can’t find on mine.  At a lot of schools, you’d NEVER find a middle linebacker with a GPA like that.  NEVER.  Might hurt their persona.

You can’t read the two pins he has on his graduation “uniform” so I’ll fill you in.  The top one says: “Always Means ALWAYS!”   The other?  His Wabash alumnus pin. 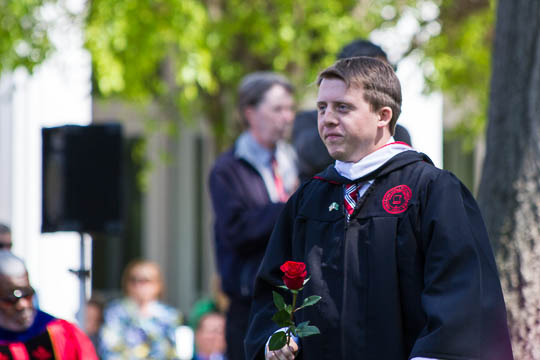 I’ve watched the movie Rudy maybe…just an estimate, mind you…100 times.  The story is compelling and that educational institution is in the Top 2 of my favorites.  My Dad graduated from there and my oldest son Chris, Wabash Class of 1994, is a Double Domer.

The movie tells the story of heart and drive…and several times through the movie I pause to remind myself, for the 100th time, that I have stood on that same ground.

Well, I am here to tell you Wabash has its own Rudy…Rudy Altergott.

I met Rudy when he was a prospective student.  He gripped my hand, looked into my eyes, and told me his name and the fact that “I want to be a Wabash man”.

I stayed in touch with Rudy from that day forward.  Rudy was, just like the character in the movie, all heart and drive.  There simply isn’t anything he wouldn’t do for someone or for Wabash.  As the videographer for Wabash football, he did everything asked of him, and more.  Never a complaint about the elements…just thrilled to be a part of it.  I can’t begin to count the times that an on-campus encounter with Rudy boosted my spirits.

So, last Sunday Rudy’s day came at Wabash.  Like 171 other fine young men, he marched across the stage, collected that sheepskin, grabbed a rose, and marched right into Wabash history.

Many of the guys who graduated last Sunday have become friends….good friends.  The kind of friends that transcend the fact that I am almost old enough to be their…grandfather!  They are good guys…they WILL change the world.

And I don’t doubt for an instant that Rudy will be right there in front. 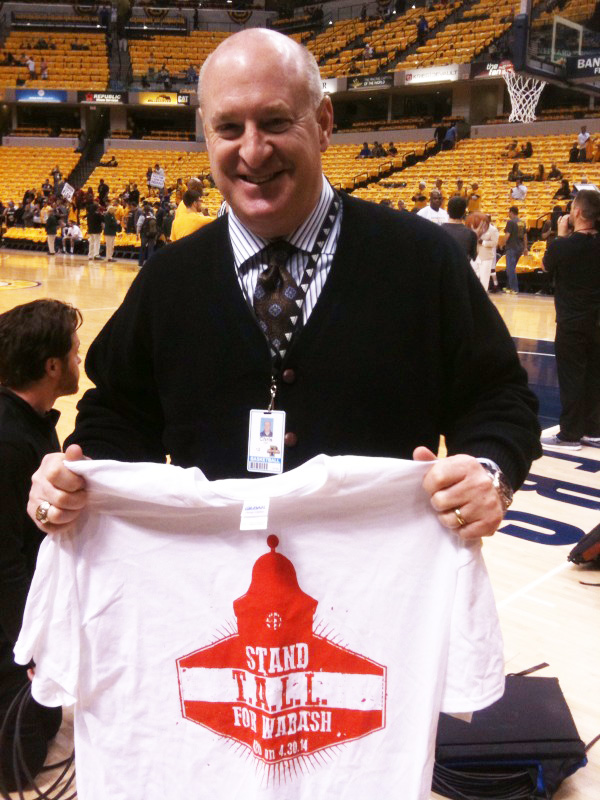 Chris Carr ’82 with THE shirt

Our good friend Ray Jovanovich ’84 was on campus this past weekend for the Trustee meeting.  Ray picked up several of the t-shirts we had left over from the One Day Giving Challenge on 4/30.

Ray left campus a little early on Sunday as he had an appointment in Indianapolis.  The appointment?  Broadcasting the Pacers-Heat game…in China!  That’s right, Ray does the NBA for stations in China.

As you can see, he caught up with sport psychologist Chris Carr ’82 before the Pacers game – that’s Chris sporting the 4/30 shirt.

So, the Pacers come out, beat the Heat in game 1, and show their real stuff…had to be the shirt! 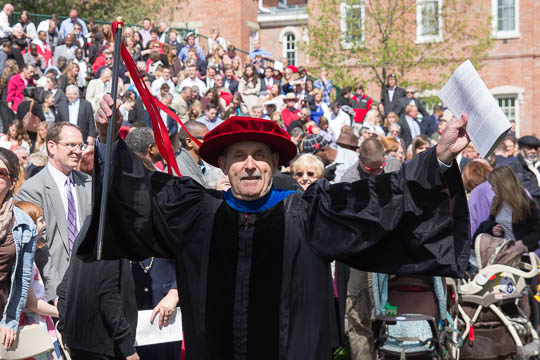 On Sunday, Professor Tobey Herzog, our faculty marshal, will lead the Commencement party in…and then out.  After some amount of celebration and wishing well the many students who have come to know and love Tobey, he’ll sneak away to remove the cap and gown.  At that point, he’ll take a deep breath or two and I’m guessing have a immense but quick allergy attack to his eyes. (Happens to the best of us!)

I found, by reading another web site of course, that the faculty marshal is not just the person who leads, but the marshal also sets the tone for personal behavior during the ceremony.

How fitting Tobey is our faculty marshal.  How fitting he sets the tone.  How fitting our guys take their lead from Tobey.  Tobey has been marshaling dozens of Wabash students for 38 years.

Why the allergy attack?  This will be Tobey’s fini-flight.  His last Commencement as a faculty member and as marshal.

It’s at times like these that I worry – who will ever take the place of a giant like Tobey Herzog?  Who can possibly fill those size 87 shoes?  Who else can smile that smile that says the world is fine and you’re fine and let’s just keep going?  Should I have genuine fear for the future of the English Department, Wabash College, and the entire world?

If I want to, I can let that panic attack run for a second or two.  Get the heart rate up…before reality sets back in.

You see, Tobey Herzog has been busily preparing Wabash for this time for years.  Not because he knew when he was leaving.  Not because he knew his time would come.  Nothing at all about his leaving.  Tobey, by action and example, has been preparing others to step forward for a long, long time.  In the classroom?  You know it!  In faculty meetings?  Absolutely!  At sporting events and the NBA?  Of course.  Tobey magically sets the standard while never needing to say anything.  The formula is exceedingly simple – those who watch him want to be more like him.

So, rests assured Wabash and the English Department will be fine.  And, in the months and years to come, you’ll look out at the Wabash community and swear that Tobey is everywhere…and he will be.  That smile and that spirit will be on display by the many who have been forever touched by Tobey Herzog.

I couldn’t get a photo to show what I wanted so here’s the well-short-of-1,000-words scene.  Raining all morning…to continue all day.  Temp at 52…might hold there for the next several hours…Noah just went by with a circular saw and hammer…he was followed by a boatload of animals…

But every senior we’ve talked to today is happy with the weather because the forecast for Sunday is perfect – highs in the 60s and sunny.  They’ll happily take the rain we had Monday, Tuesday, all day today, and forecast tomorrow for an outside Commencement Sunday.  Does it matter?  On one level, no.  They’ll still get their sheepskin.  On another level, you bet it will.  Commencement outside paints an entirely different picture for their minds to carry for the next 80 years. 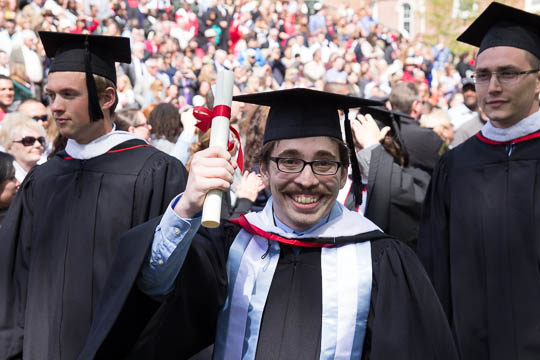 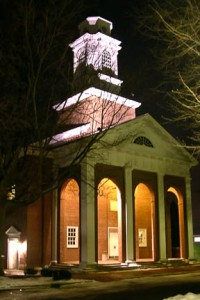 All of these are best accomplished in the twilight of day…solo…i.e., by yourself.

As you return to your living unit and the company of your friends, celebrate those long papers, difficult questions, oral comps, and every other experience.  Every little bit, good and bad, made you who you are today.

Now, do what I didn’t do.  Take a moment the next day or before you pack up to say a sincere thank you to those who changed your life here.  You’ll live forever…but they may not.  Let them know you care and you’re thankful.  Every time you’ll cut down the nets of another life challenge won, make sure they get a piece of that net.  They weren’t in it for money or for fame, they did it for you. 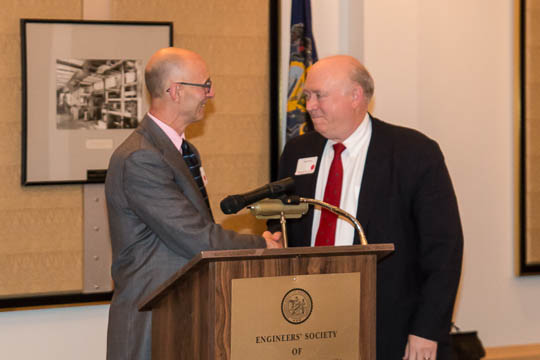 The Pittsburgh group, a talkative one, kept this one quiet all the way up to the end.

Walt Henry, maybe one of the most engaged non-alumni in the country, was surprised by the crowd when he was named the Man of the Year by fellow members of the Wabash family in Pittsburgh, PA.  Walt, son of the legendary Wabash faculty member Robert Henry, grew up at Wabash.  Never mind that Walt pursued his education elsewhere…Wabash has always remained near and dear to him.

Alumnus Bob Smith ’66 drew the honors on introducing the Man of the Year and he kept the crowd in suspense until the very last sentence.  The group’s immediate response was a well deserved standing ovation!

A surprise?  You bet!  Surprising?  Not in the least.  Walt and Cindy have long been involved and it was well past time for him to be honored. 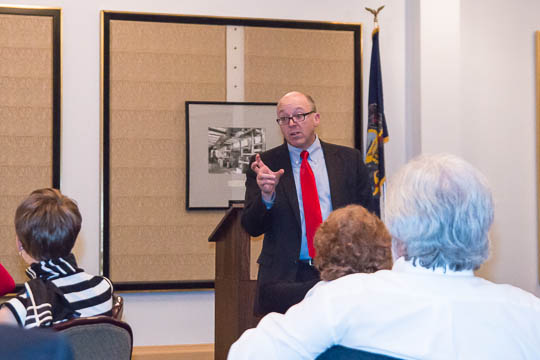 President and Mrs. Gregory Hess visited Pittsburgh in an official capacity – their first trip to the city as the first family of Wabash.  President Hess provided several updates on the College and answered several questions.  He outlined portions of the fast paced, forward thinking “West Coast  offense” he’s quarterbacking at Wabash.

Many thank To Eriks Janelsin ’02 and Lyndall Huggler ’83 for putting a fun evening together and to Lyndall for serving as the evening’s emcee. 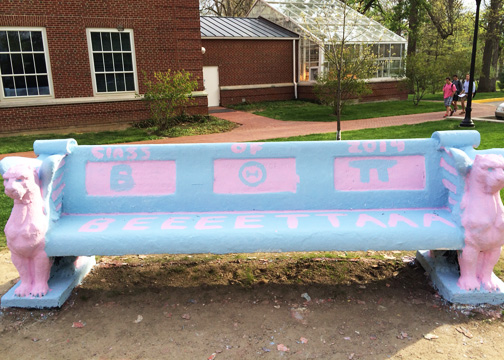 Today’s the first day of finals week…the beginning of the end…before the new beginning for seniors.

The Beta seniors took the opportunity recently to paint the bench…for what might be the final time before they paint it…as alumni. 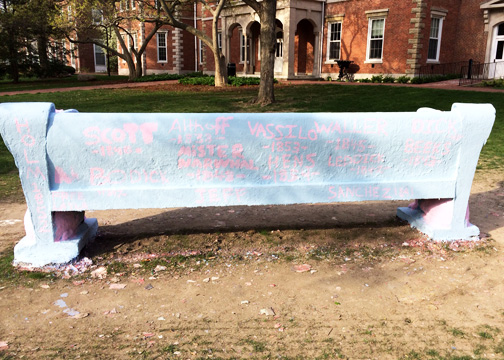 Names on the back

My guess is the paint job will last about as long as the tulips do…in other words, gone before Commencement.  But it just doesn’t matter.  You see, they have painted the bench and celebrated it.  What happens next doesn’t matter.

Just like the bond they share.  It’s there and it will last forever.  Lives will change, people will go in 4,583 different directions.  But the bonds – Class of 2014, Betas, football team, soccer, Lambda Chi, Sphinx Club, Phi Delt, Theater – will last forever.

This good place…roots grow here…Wabash is always going to be a home for these young men.  Not as students, though, but as Wabash men.