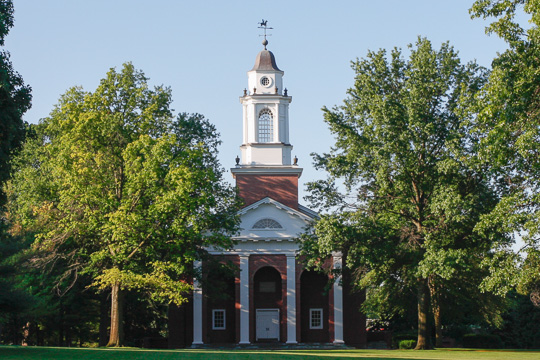 If our campus is a living, breathing thing…which it is…then the heart must be the Chapel.  Every Big Bash includes several couples, and a lot of solos, who walk into the Chapel and just…well, you pick the term.  Is it “take it all in”, is it “pause and reflect”, is it “say a quick prayer”?  I don’t know the answer…or rather I am not sure of THE answer because, I think, there are as many answers as there are alumni. 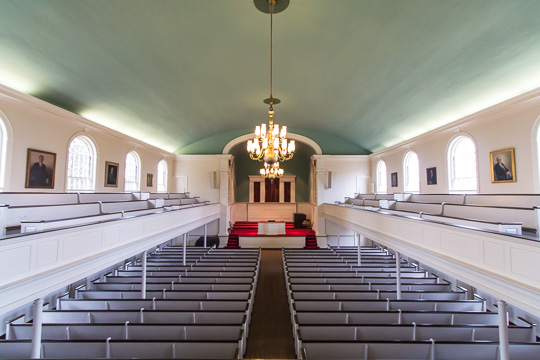 The view from the Rhynie seats

I sat just out of the frame on the left as a freshman.  Assigned seat.  Upperclassmen took attendance.  It was different then..for me.  Knowing I had to be there brought out a little of the rebel in me.

But now it’s different.  The day I took the lower photo I just kind of sat there for awhile.  I thought back to Richard Lugar talking.  I remember Vic Powell…Bill Placher…David Blix…Tobey Herzog..and a lot more.  Most of those are, unfortunately, from my staff days.

The evolution of Wabash is stark as I prepare to commence for the second and last time.  So many things have changed…but one thing remains the same, thank the Good Lord.  Today’s young men leave here equipped with the potential to change the world.  They have exceeded their own expectations…and they have a thirst for knowledge and learning that will drive them to accomplish many things. 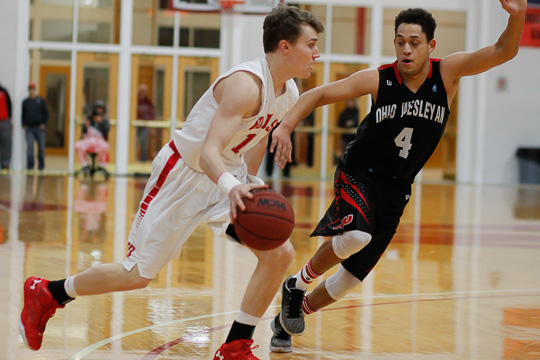 Ben Stachowski drives to the hoop

Can’t make it to Delaware for the game?  No problem.  You can watch the game on the internet at: https://www.owu.edu/about/follow-owu/stream-owu/

OWU has only lost 3 games all season…one of them to the Little Giants! 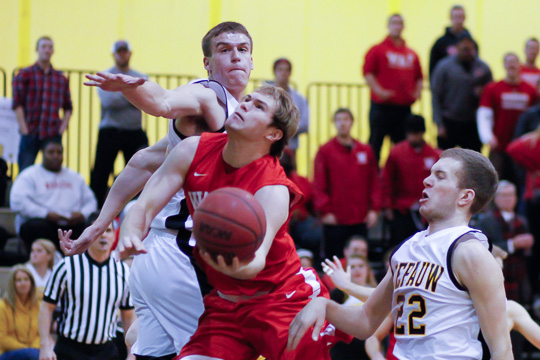 CJ McMann drives to the hoop

Slugfest.  Shootout.  Call it what you will.  Both teams gave it their all…and then some.

We battled back to tie the game after being behind for most of it – just like at Chadwick. In each overtime, there was at least one instance where I was sure we had the game won…and also an instance where I thought they had it.  The game was in doubt until the last 6.1 seconds of the third overtime.

So, on the drive home last night I was surprisingly upbeat (not the usual Grunge after a loss.)  I think it boils down to this – a life lesson last night.  Sure it was about basketball…but it was also about a lot more.  We’ll be a better team because of the experience.  But we’ll also be better at life.  We learned things don’t always go our way.  We learned others want the same thing we do…and they want it as bad as we do.  We learned that others will do everything in their power to get the win or gain the prize.  We learned that even when we think it’s over, it isn’t. We learned that bad things do happen to good people.

I know all of that because every time I thought I was about to take the defining photo…I did but didn’t.  Those shots ended up in the digital dumpster.  No matter how much I tried to tell myself I knew what was about to happen…I didn’t have a clue.

In many ways, the game was a microcosm of yesterday.

At the end, the students belted out “Old Wabash”…they knew.  They got it.  They helped me get it.

This I do know.  Not a single one of us is perfect.  Nobody keeps a 100% scoring average for life.  Every one of us has zits.  Every one us of us has bad days.  But..we’re all in this together, that chemistry makes us stronger, and this is…a good place. 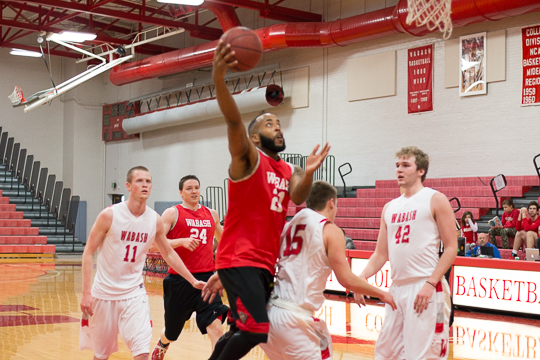 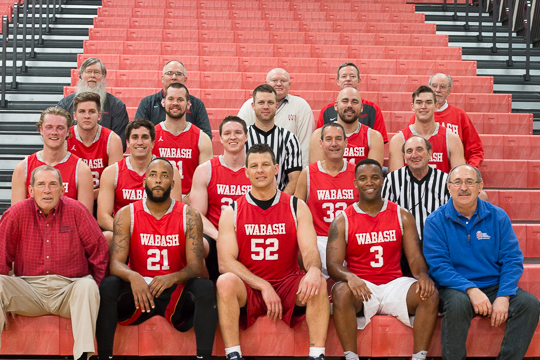 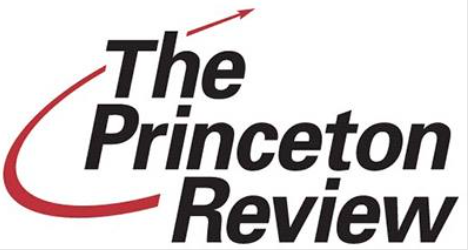 The Princeton Review recently ranked colleges for alumni networks and for internship possibilities for students.

How did Wabash do?  Check it out on the Wabash Facebook page – right here. 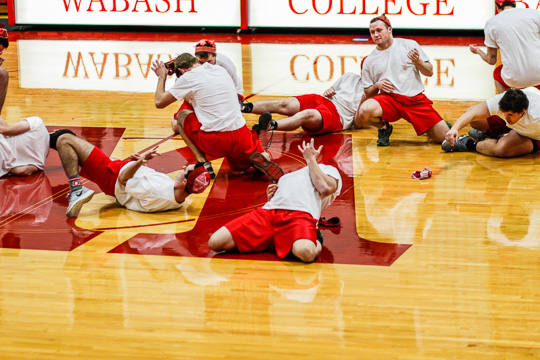 The Grunge and Carol had a sports weekend.  Four basketball games – three at Wabash and one in Louisville – and the Super Bowl!

Watched our latest Sphinx Club pledge class provide extraordinary entertainment at the basketball games…a small sample above and below.  Gotta’ tell you – they might be the best class I’ve seen. 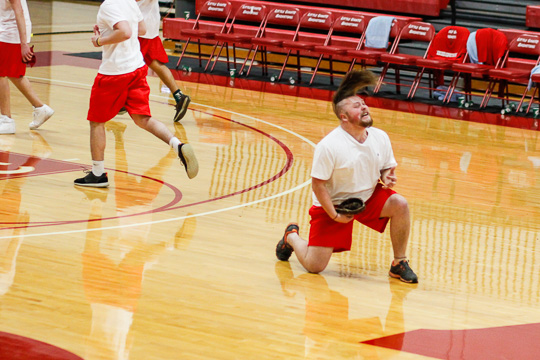 They’re “tennis match” and “bowling” are in mid-semester form. 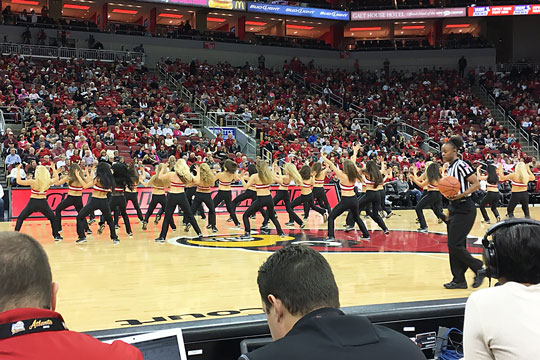 Louisville is famous for its basketball..from a number of different perspectives.  The Yum! Center had over 14,000 people in the house  Sunday afternoon.  Just had to take this photo of the cheerleaders entertaining during a TV time out.  They were talented.  They were entertaining.  And it was sure different than watching our guys.

But…different is the key word.  “Better” or “not as good” don’t apply…”different” applies. 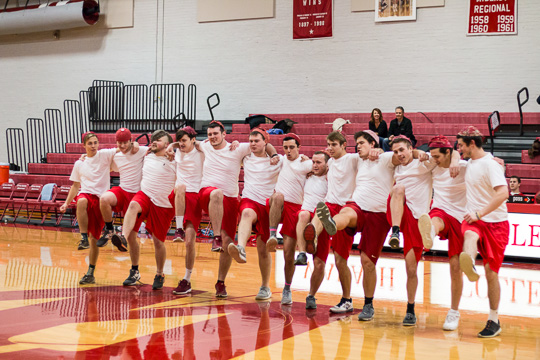 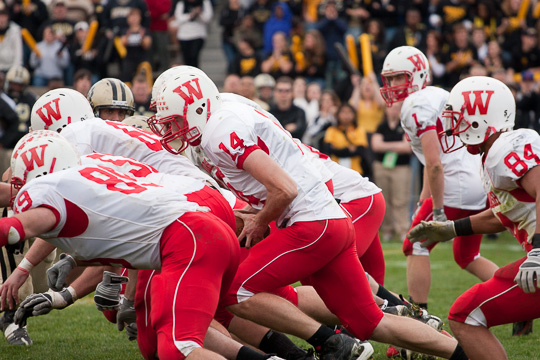 Matt Hudson on the quarterback sneak

Matt Hudson, our quarterback, made his case for keeping the ball.  He finished his plea to Coach Raeburn with words similar to “Coach, I won’t let you down.”  And he didn’t…First Down!

Wabash goes on to win…

After watching the conversation on the sidelines (but not hearing it) I knew something was up.  So, rather than move to a better angle, I decided to stay close to the line of scrimmage.  I’d rather be lucky than good, any day…)

Matt was simply not going to be denied…and his O-line was going to make it work.

That one hung in my office for a long time and now resides at home.  A special play on a special day…by a gifted and talented young man. 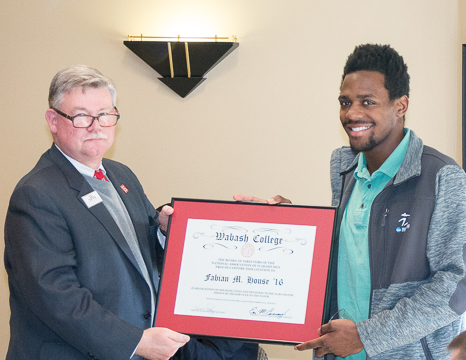 Rick Cavanaugh ’76, NAWM Board President, thanks student representative Fabian House ’16 for his service on the board

Fabian House is a go-to guy…much like classmates Mason Zurek, Tyler McCullen, AJ Clark…I could go on and on.

Fabian is a talented runner for the track and cross-country teams.  In fact, he was just named NCAC runner of the week.

Fabian has also been the campus tour guide for visiting VIPs.  As you can see in that smile, he’s got “it.”

As an NAWM board member he was invaluable to the board – his leadership and passion for Wabash are exceptional. 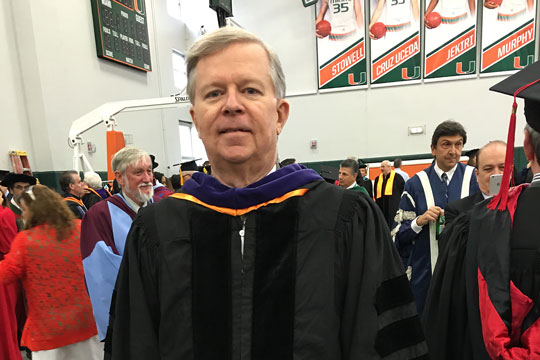 My friend Jack Brumbaugh, who chairs the executive committee of his law firm in South Miami, represented Wabash and President Gregory Hess at the Inauguration of the new University of Miami President recently.  Jack was kind enough to send us a photo as he prepared for the ceremony.

Hard to believe next June is John’s 50th reunion!

I know that Clark Dickerson ’67, their reunion chair, already has all the wheels in motion for a great get-together…heck, they’ve already invited the Grunge!!!!