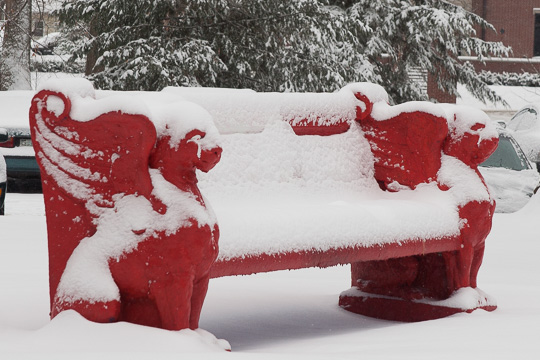 Happy Holidays from the Grunge!  Whatever your faith, I hope this is a time of giving, thankfulness, joy with family and friends, and a little bit of reflection as well.  If you’re traveling, travel safe.

As I close in on my departure from Wabash, I continually reflect on what has been the same over my 16 years back at the college.  In 1999, the Class of 1991 sat right in the middle of the young alumni spectrum.  This spring they will be back for their 25th reunion! Go figure!  Time has marched on, for sure.

The faces change but the experience just keeps getting better and better for these young men.

I hope you feel good about Wabash and you believe this is an institution worthy of your interest and investment.  If so, do me three simple favors:

2.  Check the Honor Roll for a classmate who is a friend.  If he’s on there, thank him with a quick note.  If he isn’t, send him to step three.

Thanks for all you do for our college! 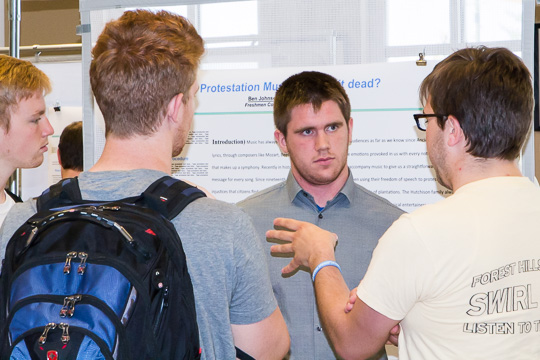 These young men can change the world! 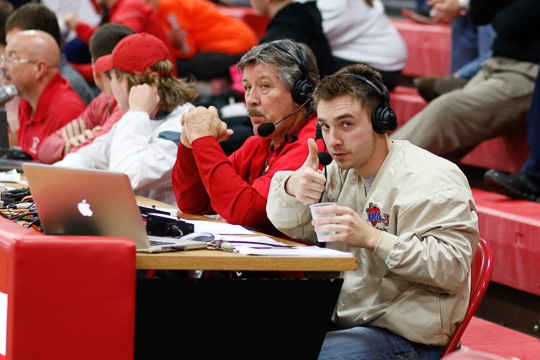 Tom Perkins and Clayton Randolph ’16 on a commercial break

Last night Wabash played Franklin at home.  We had a great crowd and the Franklin fans traveled very well.  Chadwick was alive.

My long-time baseball buddy Tom “Perk” Perkins – we played in the Crawfordsville leagues growing up about 100 years ago – jumped in to do the radio broadcast with Clayton last night.  As you can see, Clayton thought the entire broadcast was going extremely well.

Perk does so many things for the college – he is truly cut right out of the Chick Clements mold. 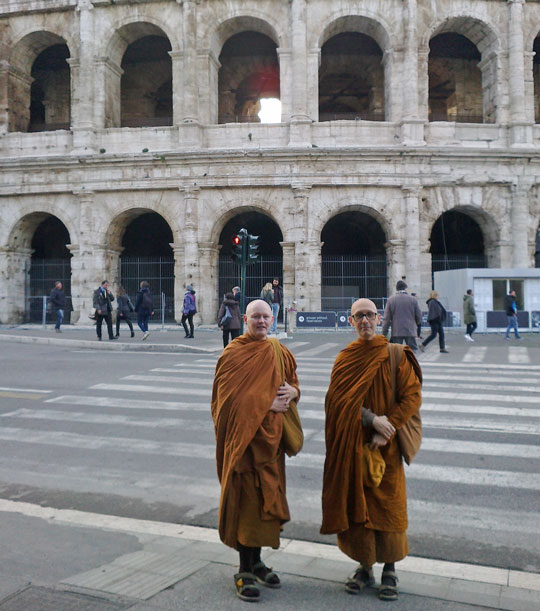 Jotipalo (L) At The Colosseum

Wishing you a Merry Christmas and Happy Holidays.  Great to see that you are still getting out to the Grand Canyon!

Noticed on the Wabash web site the stories about ancient Rome (http://blog.wabash.edu/immersionlearning201314/2015/12/17/colosseum-lives-up-to-expectations/)  I’ve been visiting some of our monasteries in England and Italy, over the last seven weeks.  Return to California tomorrow.  Italy was great, the highlights for me were visiting two of the monasteries where St. Francis spent time.  My favorite was Fonte Colombo.  Attached are two photos of me outside the Colosseum.  I had my eye out for Wabash clothing while in Rome, but didn’t see any! 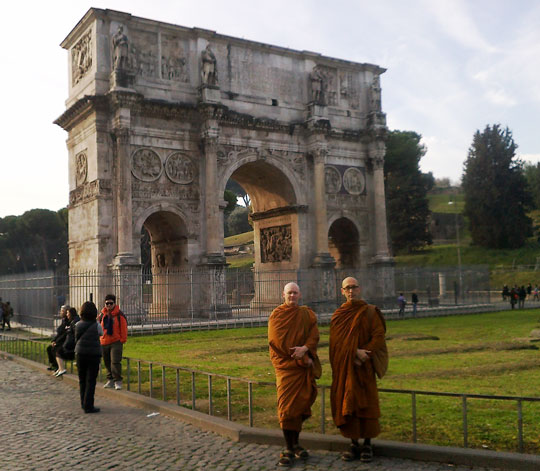 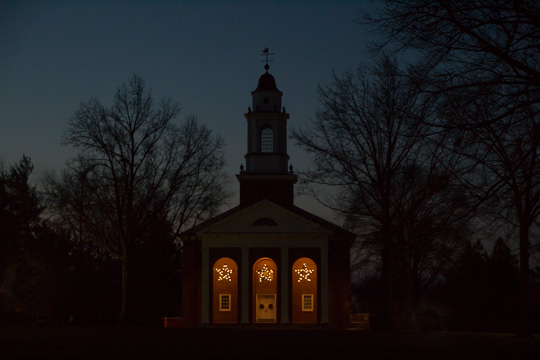 I decided, since it was cold and dark this AM, that I’d take a shot at capturing the Chapel before the sun hit it.

The Chapel is the centerpiece of “this good place” – I think goodness holds court just inside that second set of doors. 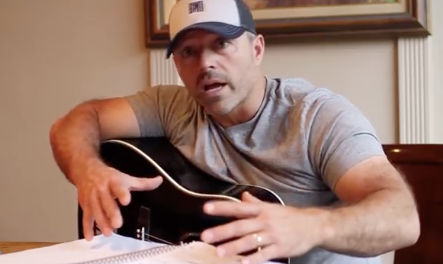 If you haven’t seen this video yet, go to the Wabash web site and click on featured video. You don’t have to like trucks (but there is “something about a truck”!) or country music to appreciate Dan’s story of his career journey and the liberal arts in action.  It isn’t the usual story…but it’s a liberal arts outcome for sure. 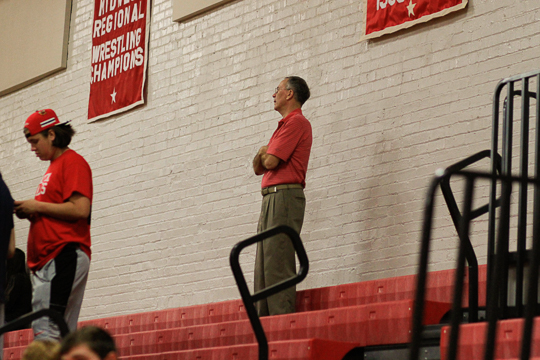 I caught this photo of Rusty Nichols ’63 at our most recent basketball game versus Wooster.  Rusty found a space up behind the students where he could watch…and pace…and do a little mental coaching, I’ll bet.  He spent the first half up there….doing what all coaches do. 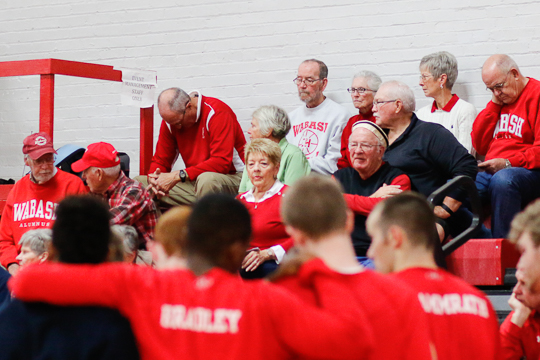 Rusty wasn’t the only one there.  Mac Petty H’82 also attended…as he almost always does.  He has that same seat…last row next to the camera guys.  I caught this one as the team was finishing a time out.  I am pretty sure Mac was doing a little mental motivation as well.

There is a part of me that feels like I was trespassing when I took those shots.  I thought back to the football team at Arlington…and standing to the side by myself at the Tomb of the Unknowns.  I was there…but I was occupied.

Rusty and Mac were occupied as well.  But the bottom line is pretty simple – they care…deeply.  Sure there’s the coaching DNA…for sure.  But those two guys also love Wabash and the student-athletes who represent Wabash on the court.  They have both been there…it is, and will be, forever a part of them… 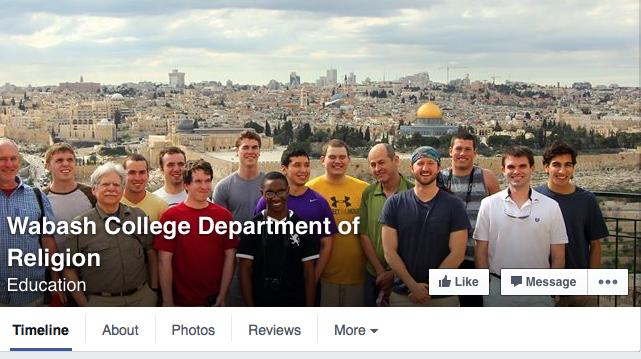 You can find the Wabash Department of Religion on Facebook right here.

Two recent posts are well worth your time.

Wabash alumnus Art Farnsley ’83 has a link there to a piece he had in the Indianapolis Star.  It’s about religious affiliations in the State of Indiana….a trend we’re probably seeing across the United States.  A little farther down the page you’ll see a piece referencing the work Of Ben Keeling ’02 for the Wall Street Journal.

We have a lot of young men who have majored in Religion – it’s a very popular major for a number of reasons.  Wondering?  Check out their page on the Wabash web site. 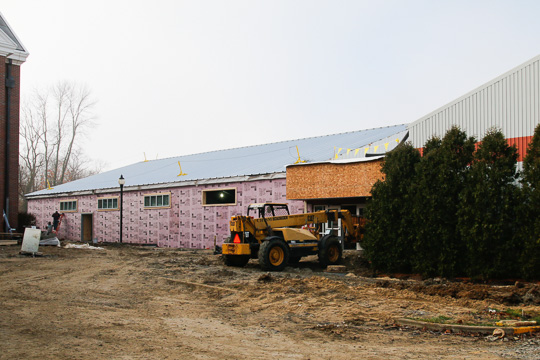 Took a walkabout this morning…wanted to get out of the office and check on construction around the campus.  As you can see above, the Shelbourne Wrestling Center is coming along nicely.  It will give our wrestling team a dedicated practice area while also providing locker room facilities for the wrestlers and the tennis team. 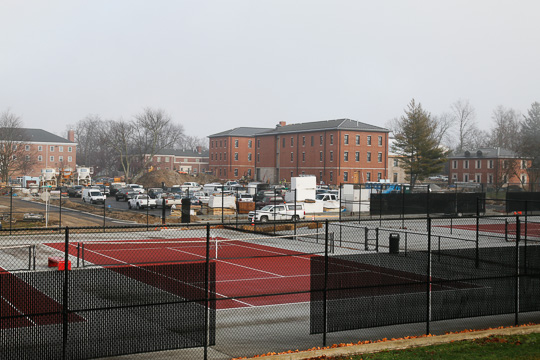 That’s Sigma Chi on the left, Delt in the background, and a new hall takes center stage.  The west side of campus will undergo a huge visual change when it is all complete. 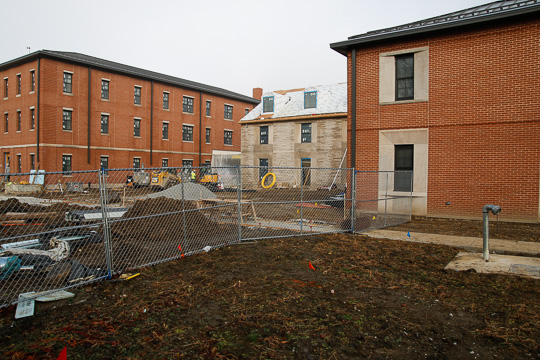 Here you see one of the townhouses with a Lodge in the middle and a Hall behind it.  The plastic sheeting in the center covers the “connector” between the Lodge and Hall. 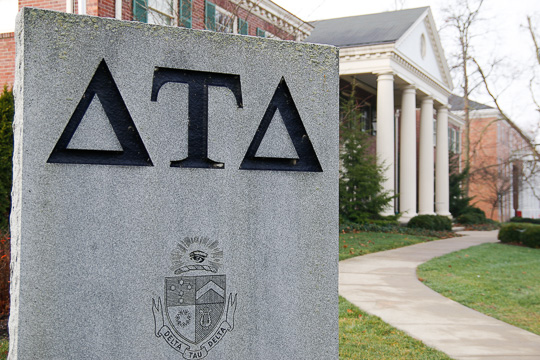 Of course, no west side walkabout would be complete without a brief stop at the Delt House.  It won’t be long now… 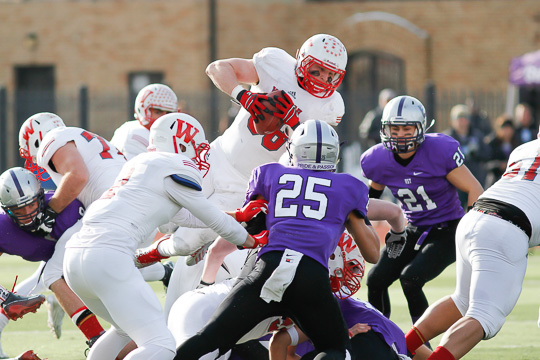 Mason Zurek Over The Top

So…my jaw isn’t so tight anymore and it’s time to put it all into perspective.

That’s Mason Zurek going over the top for a first down at St. Thomas.  My grandson Coley refers to Mason as a “beast” – it’s the greatest compliment he can make.  Coley saw Mason at Hampden-Sydney and walked away saying “Mason Zurek is a beast.”  All true – he’s clearly a record-setting running back for the Little Giants.

But that’s just a small portion of the man Mason Zurek.

He’s a young man who always smiles.  Friendly beyond compare.  Once you meet his parents, you understand friendly and happy run in the family.

Mason’s GPA at Wabash is north of 3.5 – you’d need to add my two best semesters together to equal his.  On December 5, 2015, the day of the St. Thomas game, Mason was originally scheduled to take the LSAT – THE test for Law School.  He postponed it for a very special football game.  But he’ll attend law school and be a very special attorney. 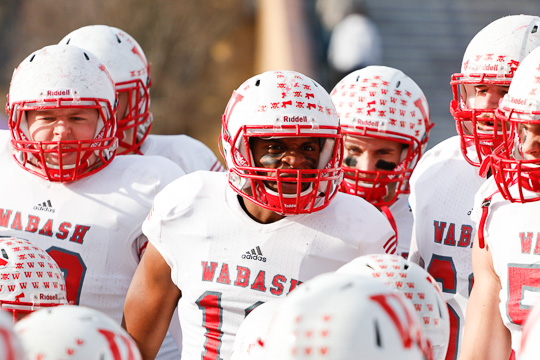 AJ Clark Fires Up The Team

I have known AJ Clark throughout his time at Wabash.  He’s a talented young man in many ways.  He’s made films while a student here.  He’s been a leader.  And he’s never stopped giving his all as a member of the football team.  AJ Clark’s challenge has been he’s in a group of a lot of very talented linebackers.  So he had to wait his turn.  Meanwhile, he always seemed to be in on a special teams play.  This year has been different.  #10 on defense got the call and he’s delivered.  Leaders lead…and AJ Clark is a leader.

So on this Tuesday morning driving down from Lafayette, I finally paid the right amount of attention to the right things.  The football team was one of the last eight teams standing. 12-1.  A great season.  Is St. Thomas a better football team?  Probably.  They were on the day.

But, the Grunge wouldn’t change anything about who the Little Giants are.  Not one thing.  Mason and AJ are just the tip of the iceberg of great young men who are, in the truest fashion, student-athletes at Wabash.  Mason and AJ and…well, you can add a boatload of seniors’ names here…Michael Putko, Connor Karns, Eddie Cmehil, Matt Gibson, Tom Garrity, Evan Rutter, Tyler McCullen, Wes Brown, Chris Broecker, and Matt Dickerson to name a few…these guys set the standard.

These guys will help change our world.  Long after the scores fade away…these guys will still be scoring touchdowns in the game of life. 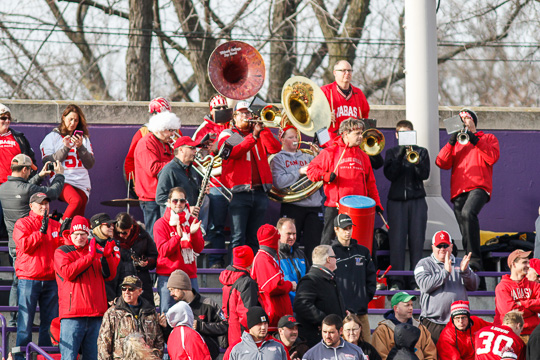 The Wabash Pep Band proved they travel just like Wabash football fans as they made the 600 mile trip to St. Thomas in St. Paul, Minnesota for the quarterfinal game between the Little Giants and St. Thomas.  Wabash had a good crowd as you can see.  In fact, a few St. Thomas fans commented that they wished their fan base traveled as well. 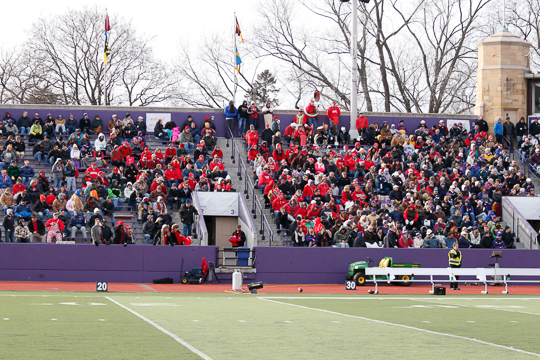