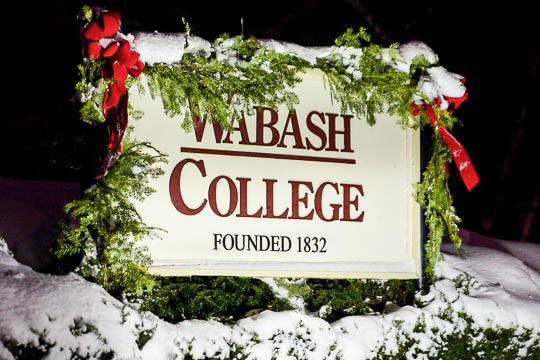 The Grunge is headed out to be GaBunge for a little while.

I just finished reading the latest class letter by JJ Peller ’13.  JJ relates a story about looking for a new truck and the importance of a Wabash connection to that purchase.  JJ made a three hour drive, passing several dealerships on the way, to see classmate Corbin Richards ’13 for a very simple reason – JJ knew what he wanted but had some questions.  He knew Corbin would shoot straight with him.

That reminded me of the way we picked our family doctor when we moved to the South Bend area almost 20 years ago.  I opened the South Bend Tribune and saw a piece on the new physicians coming to the South Bend Clinic.  Bob Oppman ’88 was listed.  I didn’t know Bob from Adam…but his AB was from Wabash and that’s all I needed to know.  Despite moving for South Bend 15 years ago, Bob is still a great friend and our ND area family doc (we have them all over now!)

When I needed some fairly serious work done back in 2006, I turned to my classmate and friend Trey Holland ’71.

When Carol needed a new knee, we went straight to OrthoIndy and Frank Kolisek ’82.

The critical part in all this is the instant trust you have of someone who went to Wabash.  We all know this is a tough course…but we also know it changes lives.

So, I ask a favor.  Join me in supporting Wabash as the year comes to a close.  Wabash makes a difference in young men’s lives.  And education of our young men is more important than ever before.  We do make a difference.

To go straight to the “Give Now” option, click here. 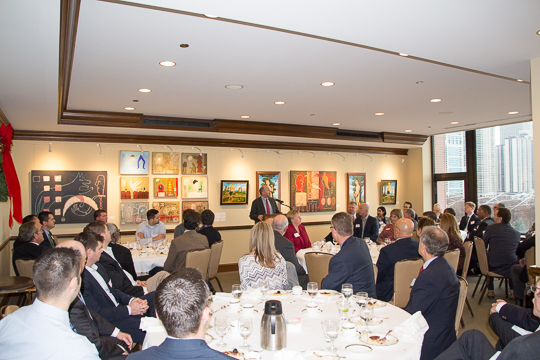 Mike Warren and I made the trip yesterday to downtown Chicago for the Annual Wabash Club of Chicago Holiday Luncheon.  The location was the University Club.  There wasn’t any traffic (thanks Mike for driving!) and we arrived earlier than we had anticipated.

I hate to reveal personal secrets…but my usual custom is to check out the room for the photo opportunities.  At my minuscule stage of proficiency, I need every advantage I can get.  We had been in the room before so it wasn’t a big deal…or so I thought.

Well, as Lee Corso would say, “not so fast my friend.”

The Club’s Art Gallery had been relocated to the room and it seems the theme of the exhibit was “No Clothes.”  Here’s the look right behind the podium and mic. 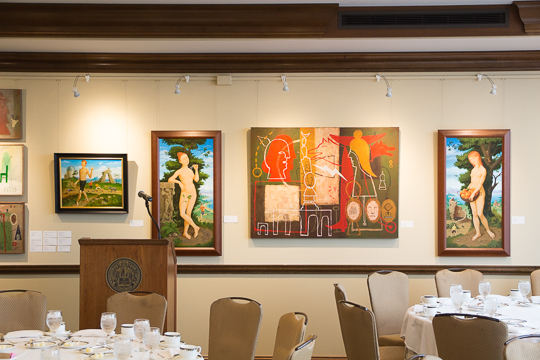 So…instead of anchoring myself in a good spot, I ended up walking back and forth in the back of the room…constantly.  I felt bad, but at one point I had to “reposition” Greg Estell right in the middle of his comments.  Here’s the link to the photo album – see if you can spot the photo right after the “reposition.”

At the end of the day, however, the art just didn’t matter.  As always, the Chicago Holiday luncheon was a great event.  Plenty of Holiday spirit and a time for President Hess to share a lot of great news about the College.

So, this week is like root canal week for the students.  A little pain, a little suffering but all will be well when most of them get to go home to some well-deserved rest, home cooking, and no 8:00 AM anything.

Like I tell you…we’ll be glad to see them go…the place will be quieter.  Some of us will actually get some of the good, no door-ding parking spots.  By about December 26, though, we’ll start to wonder why they aren’t back yet.  Such is the cycle of life here. 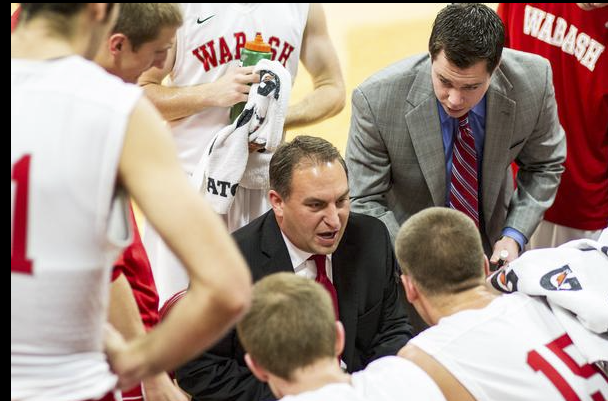 If it’s been a while since you took in a Little Giants basketball game, this is the season to get caught up!

Coach Kyle Brummett has brought intensity and high energy back to Chadwick Court.  Our guys are playing hard and playing well.

Kyle is a coach, though and through.  When I congratulated him on last Saturday’s win, he was quick to say “Thanks” but just as quick to say “We had too many turnovers.”  Reminded me exactly of a young lady coach I know from a place up north!

Kyle, and his assistant coach Patrick Sullivan, get Wabash…that’s for sure.  They also know basketball and already have proved they can motivate our guys.  Get ready for a new brand of Wabash basketball!

You can see the Wabash schedule here 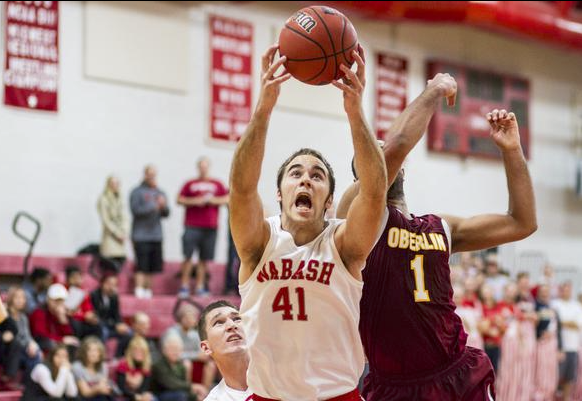 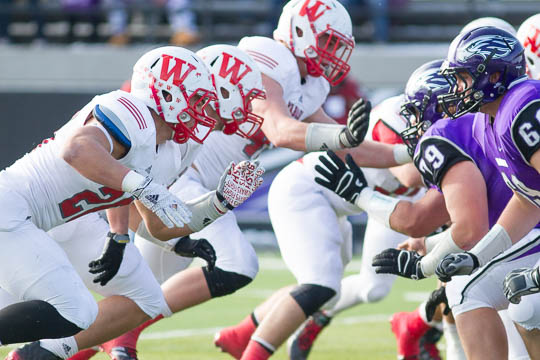 Proud of these guys!

Carol and Grunge jumped in the car bright and early Saturday morning after seeing the last family members off from a short Thanksgiving visit.

This blog won’t: talk about Xs and Os, the relative size of Whitewater, their football domination, the final score, or any of that other stuff.  None of that matters on this Thursday, I have decided. Yes it took me this long – those of you who know me well no I don’t handle…well, enough said.

I picked this photo for one reason.  It isn’t an individual shot – it’s team on team.  Secondly, Ethan Buresh’s gloves say it all – Wabash Always Fights.

Our guys played hard…the entire time.  Our captains – guys like AJ Akinribade – were working the sidelines…urging guys on.  Guys like Houston Hodges, who played virtually every down on Offense and Defense, just kept bringing it.  Cody and Ethan Bureshs’ engines ran at full grunt (a very technical flying term) the entire day.  Despite a very painful case of turf toe, Mason Zurek just kept at it.  These weren’t unusual – virtually every one of our guys did the same.

I believe its times like the second half of this game that define people.  It would be so easy to tell yourself that it wasn’t Wabash’s day.  To admit that the Warhawks are the #1 team in the land for a reason.

But that did not happen on a cold day in Wisconsin.

The fans that day – on both sides of the field – saw what has always been a cornerstone defining “This Good Place” – Wabash Always Fights! 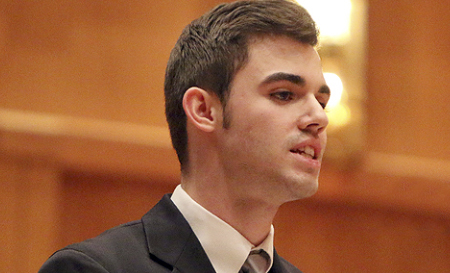 Nice piece on Jacob, our newest Rhodes Scholar, in the Lafayette Journal-Courier

The following was borrowed from the Rhodes Scholars web page:

Jacob L. Burnett, Mishawaka, is a senior political science major at Wabash College. He also has a minor in psychology, and has won major academic awards in several subjects. He has done research in transnational crime involving adoption, on sub-Saharan political leadership, and on Appalachian poverty. Jacob is especially interested in criminal justice, having worked for the Legal Aid Society in Kentucky and as an intern with the Public Defender Service in Washington, D.C. He has been a tutor and mentor for underprivileged elementary school children. At Wabash, he is news editor and was formerly opinions editor of the student newspaper, president pro tempore of the student body, and was president of the College Democrats. At Oxford, Jacob will do the M.Sc. in Criminology and Criminal Justice.