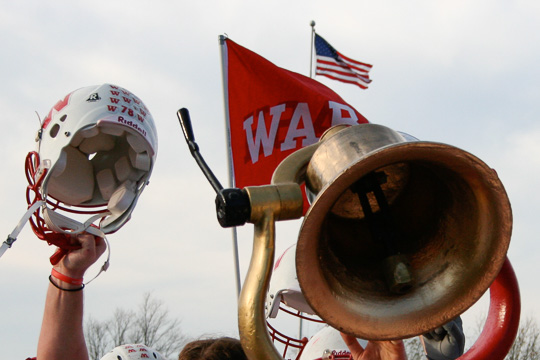 “It was my Freshman year (1965), we hadn’t won the bell since 1955, and then, miracle of miracles, the Bell gets swiped by an enterprising Wally from a characteristically stupid Dannie: President Kerbsetter (as we called him), winner of the No-Bell Prize.  It’s such a great story, and was an irreplaceably fabulous moment for us Rhynes, as we were then called.  Nothing in my Wabash experience, not even the great 7-0 game in 67, galvanized the student body the way the heist did.  I’m sorry only that I didn’t save my sombrero.  The story’s been told endlessly, of course, and deservedly.  The point really is that some moments crystallize whole experiences.  There’s a rhetorical word for that, but I can’t come up with it easily.  Whatever.  In that one experience you have, for me at least, the spirit, camaraderie and ingenuity that was and is the Wabash experience… This uniquely “loyal son” has and will “always love” the Old Place.

WAF—-Just as I was to send this, the old gray cells fired, the synapses connected: synecdoche.  That’s the word I wanted.  There ain’t many Dannies who know that word, I’ll wager.” 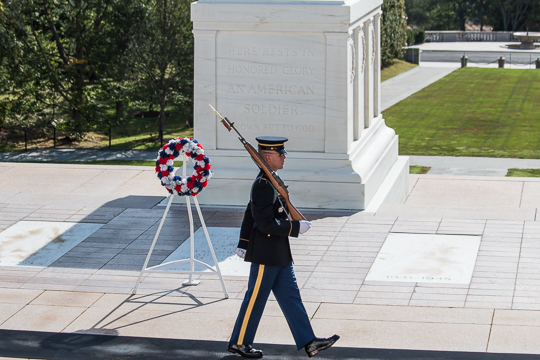 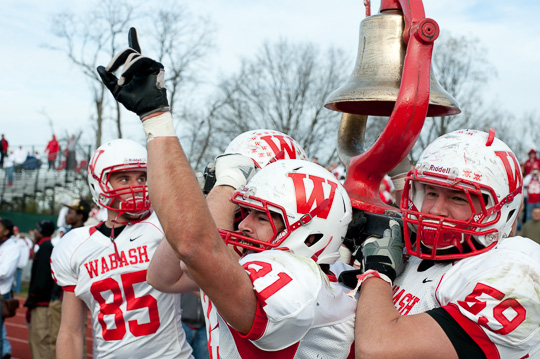 Hope you’ll be watching Saturday afternoon in person, at one of our more than 60 Monon Bell telecast parties, or with other Wabash fans. 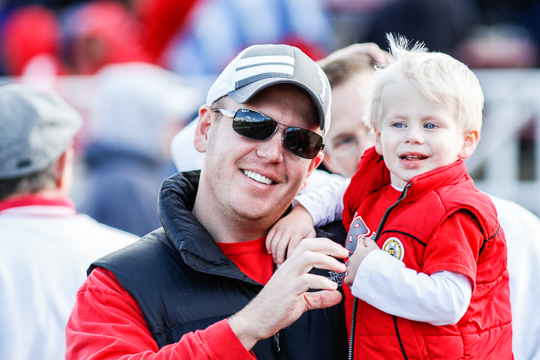 Chris Morris and his son

Wabash Hall of Fame running back Chris Morris ’04 (CMOE) attended the Denison football game this past Saturday.  In a time-honored tradition, Chris and his son took the field at halftime to work on a couple of moves…and get rid of a little steam.

It was readily apparent that his son has that running back DNA – successfully alluding the “tackle” of his father several times.

I think the football field has a special attraction for children- they get to dream big and run on the very same field their heroes played on…where else but Wabash and Division III? 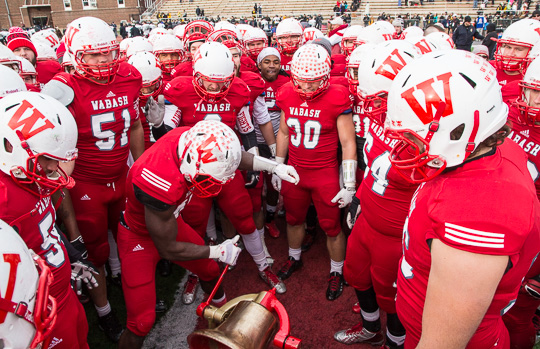 Wabash in the North Region (Mount Union) Bracket at #3…see the rankings here. 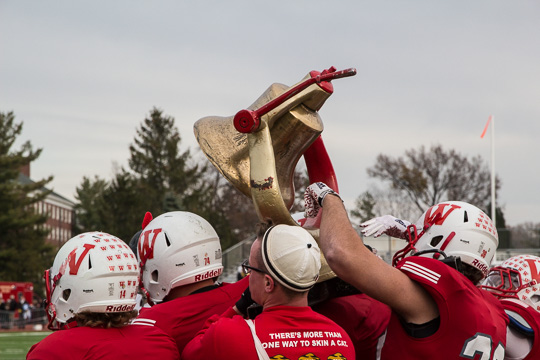 “Fewer than 750 tickets remain on sale for the Wabash College seating section of Blackstock Stadium in Greencastle, Indiana. Tickets will be sold in the College’s Bookstore during regular business hours, including home football Saturdays or may be purchased online through the Bookstore web site until sold out.

Tickets are $20 each, and every person attending the game must have a ticket regardless of age. Tickets purchased online will have an additional shipping charge added to the total purchase for requests to mail the tickets to the purchaser prior to game day.

The Student Senate has once again purchased tickets for Wabash students. Each student may pick up their single free game ticket during regular bookstore business hours beginning October 1. Each student will receive one free ticket, and those will be set aside until Monday, November 9. At that time student tickets will be returned to general sale. There are currently 400 of the reserved student tickets available at the Bookstore.

No free tickets will be issued to “W” pass holders, Wabash faculty, or Wabash staff as the game is being played in Greencastle.

Wabash and DePauw will meet for the 122nd time on Saturday, November 14 at 1 p.m. at Blackstock Stadium. The Little Giants lead the series 59-53-9. Last year Wabash won its sixth consecutive Monon Bell title with a 27-3 victory in Crawfordsville.” 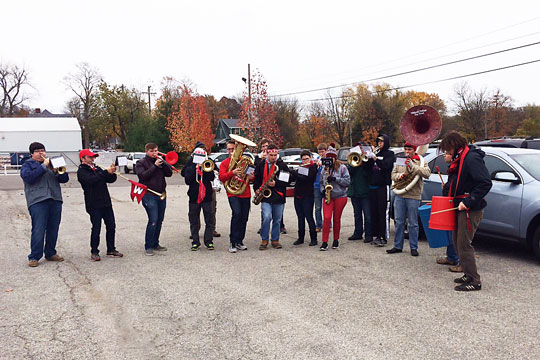 The Pep Band is rockin’.  The group has grown in membership and talent and made a tour of the tailgates this past Saturday.  Students, faculty, staff, and friends combine to give the band some major league output.

You’ll note they’ve combined the traditional with the new – we have snare drums but we also have the red and blue buckets for percussion.

Wabash football – great student-athletes, active fan base, hot chocolate from the concession stand, and now some tunes from the Pep Band.  How could Wabash football be any better? 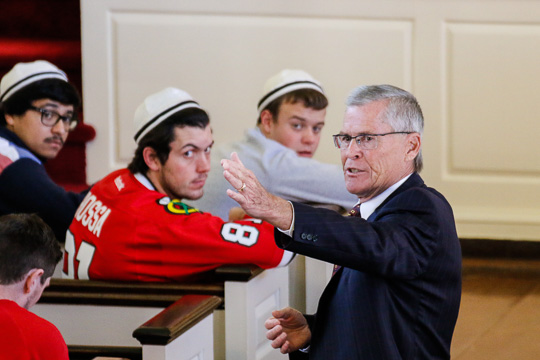 Professor* Rich Woods gave the Chapel Talk yesterday morning.  As soon as I saw the title – “Taking a Walk In The Dumb A** Zone” – I knew I had to be there.  (I’ve traveled the path through that zone more times than I care to count.)

Rich didn’t disappoint.  Straight talk from one of the most respected people on campus.  I’ll not give away any gems – watch it on You Tube, including his ending!

Every liberal arts education includes a class on the “zone”.  In a lot of places, you don’t get the luxury of someone telling you, in straight talk, how to avoid staying in the zone too long or falling right into the center.   Most places you’re in the zone usually without a wingman.  At Wabash, Rich Woods in ALWAYS your wingman.  That doesn’t mean all sins are immediately forgiven.  It means Rich truly understands and he sees his teaching role as minimizing a young man’s opportunity to stay too long in the “zone”. 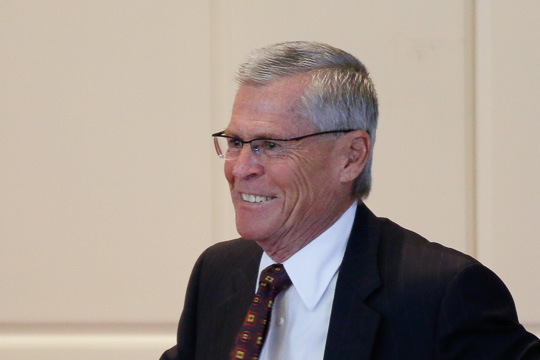 * Professor- Quick definition.  A teacher of the highest rank. 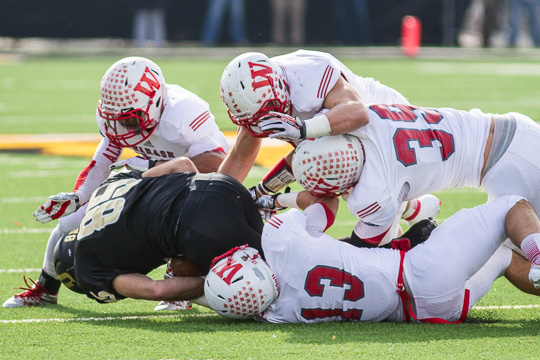 The 122nd edition of the Monon Bell game looks to be a good one.  DePauw is currently at 6-1 and Wabash stands at 7-0.  DePauw and Denison are tied for second in the conference and Wabash plays both in November.  Wabash’s opponent this weekend is OWU who just handed DePauw their first loss of the season.

So, the Bell game will be a Big One – but it always is.

Hopefully, you’ve ordered your tickets from the Wabash Bookstore and you’re already planning your tailgate in Greencastle prior to the game.  If you can’t be there in person, we hope you’ll join other Wabash fans at one of the more than 60 Monon Bell telecast parties.  You can see the complete list here.

I’ve watched the movie “Rudy” at least 100 times.  Carol’s tired of me pointing out all of the scenes in the movie where she and I have been in that same spot on the ND campus.

Well, Saturday at Wooster we got to witness another Rudy – not a Blue and Gold one but a Scarlet one.

Meet #58…Ethan Shultz.  Freshman linebacker from Danville, Ohio.  Stands 5’6” tall and weighs in at 152.  Practices and plays well above both. 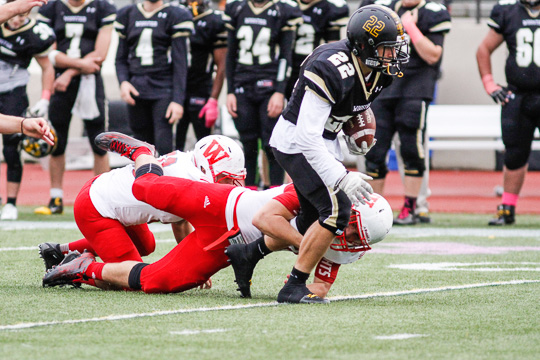 Ethan played on the kickoff coverage team at Wooster.  Streaking down the far side of the field, he made a b-line towards the ball carrier and down he went. 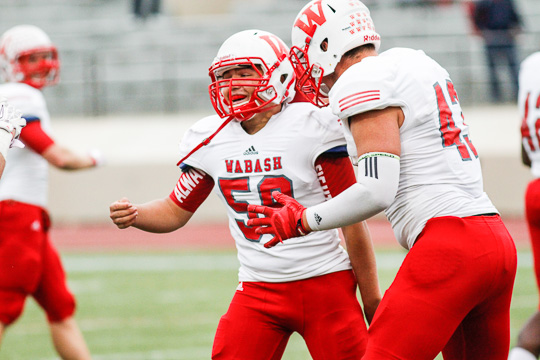 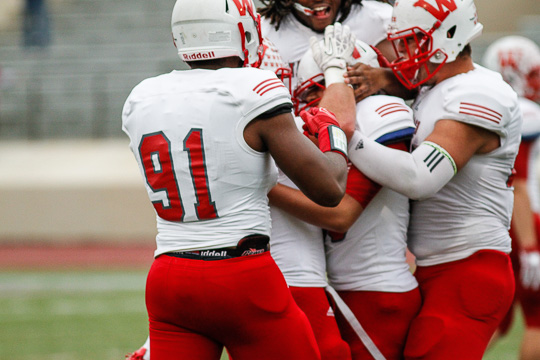 It was a team bear hug as Ethan made his way to the sidelines.