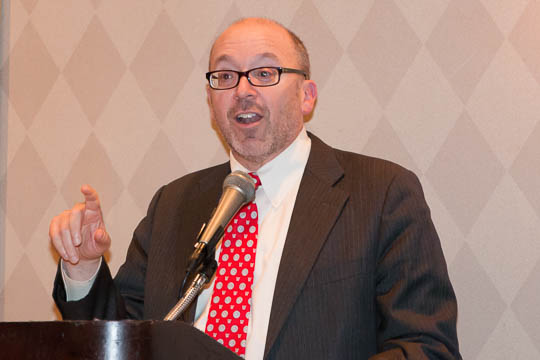 At the Cincinnati dinner last week, we had four young men interested in Wabash.  At one point, an alumnus asked President Hess to explain the liberal arts and it’s relevance this day and age.  It was a good question – the President gave a great answer.

“Study something you are passionate about at Wabash” he suggested.  Then he reflected on his own undergraduate experience.  He didn’t know what he was going to do after college, he suggested, but he did love the study of Economics and that ended up his major.  Did a degree in Economics help him as a consultant with Honda Motor Company and the Federal Reserve?  For sure.  But it was the passionate search for knowledge, coupled with the all around liberal arts education, that made him the College President he is today.

It’s the same for those young men considering Wabash and a bazillion other schools.  Get an education that will prepare you for anything, including the great unknowns.  The CEO of one of Indiana’s fastest growing tech companies?  A Wabash German major.  A Cardiothoracic Surgeon in Illinois?  A Wabash English major.  The father / son Wabash team at Sun King Brewery?  An economics major and a speech major.