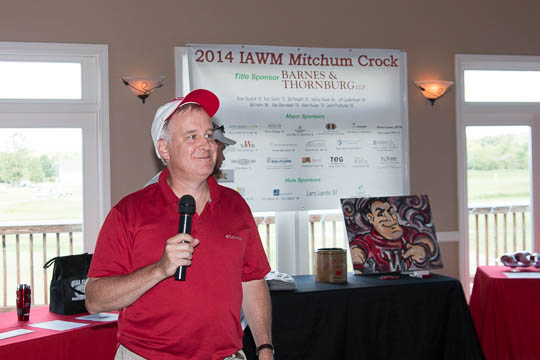 I don’t want to mess with Superman’s cape, but here goes.  Yesterday’s IAWM Mitchum Crock came off beautifully – it might be the best one ever.  It didn’t hurt that the weather was absolutely beautiful.

I heard many guys exclaim that the Crock was fantastic.

The Crock was sponsored by Bob Grand’s firm – Barnes and Thornburg.  The course – Plum Creek in Carmel, IN – was in tip-top shape.  The Crock committee had sponsors Sun King Brewing and Sullivan’s Steakhouse set up strategically to keep the golfers hydrated and fueled.   (If that isn’t a true Wabash menu, I don’t know what is).  For after dinner – which was ribs and and the “fixins” – they had a little Rye Whiskey from my good friend Dave Weglarz ’03 from Still 630 in St. Louis.