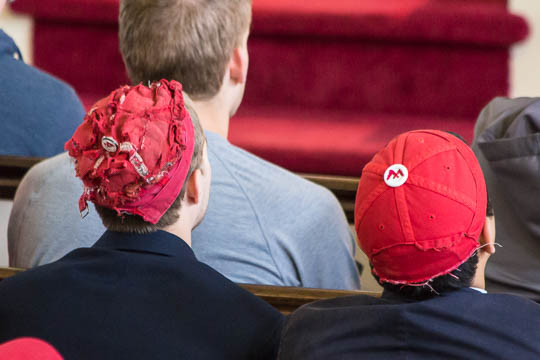 The old and the new…both timeless in their own way.

Took this photo right before President Hess’ Chapel talk.  I was struck by the symbolism of the old and new Sphinx Club pledge pots side by side.

One denotes a proud past….who are the guys who have worn that particular pot?

One denotes a newness…crafted upon tradition.  Who will wear that pot?  Which one of your sons or grandsons will don that one?

Isn’t this all about Wabash?  I call it “state of the art traditional.”

We do some things the same way we have always done them…because we believe that’s best.  We continually refine other things because we’re in the pursuit of perfection.  How do we tell the difference?  Honestly, I don’t know.  But I do know that Chapel Sing remains a cornerstone of Wabash and having the absolute best textbooks, teachers, and labs is also a cornerstone of Wabash.

That’s pretty deep for me…

And all of that makes this poor, dumb fighter pilot’s head spin!