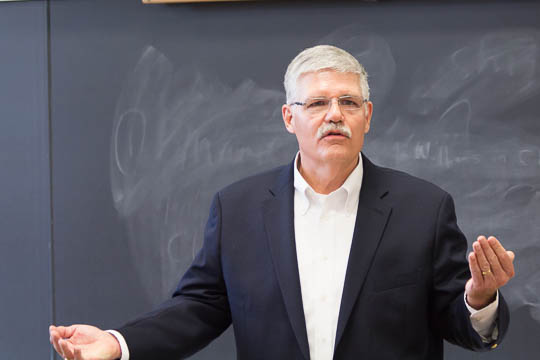 Frank Buerger ’73, a retired Navy Captain and Naval Flight Officer, spoke on campus this week at a program called “Callings”.  Callings focuses on inviting alumni back to campus to share their story – from their time at Wabash on to today.

Frank was thinking Law School…and took a hard right at the cockpit of an F-4 Phantom.  You can do that as a Psychology major at Wabash!

Frank’s Navy career is the liberal arts in action.  After flight training he went on to go through the ranks.  He explained it is assumed you’ll be good in the jet – they wouldn’t give you this gold wings if there was any doubt.  “What else can you do?” is what the Navy, and all the Armed Services, look for in an officer.

Frank proved his value as a flyer but he also proved his worth as a commander, leader, and intelligence officer.  He’s still working – he’s a civilian in the Office of Defense Intelligence Integration.  Take it for the Grunge, that’s probably a challenge.

Thanks, Frank, for sharing your story with our guys and thanks for your Service!