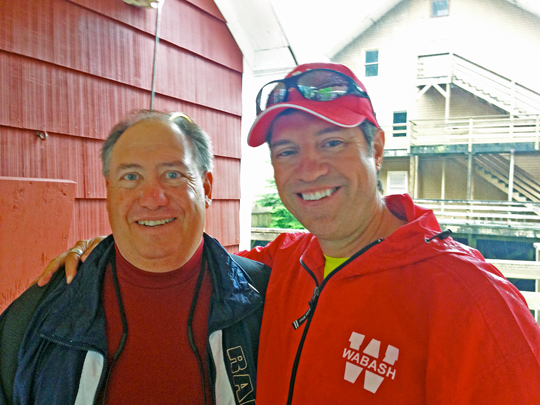 “I’m attaching a picture of me and Pete Schiavone ’81.  Earlier this summer Tim Jr, Pam and I were hiking Yellowstone, and coming out of the trail I heard someone react to my Wabash hat and jacket.  He introduced himself but I can’t believe I can’t remember his name.  He was in the class of ’91 or ’92 I think.  To make matters worse, I was so tired and surprised–I shouldn’t be since I once ran into two Wabash students in the middle of the Rome marathon–I didn’t think to take a photo.  His wife joked how “you guys can’t go anywhere without running into fellow Wabash guys.”

Later in our vacation we were on board a cruise ship to Alaska when an elderly lady saw me in a Wabash shirt and stopped to talk to me about what a wonderful, beautiful place Wabash is.  A friend from high school went there and she used to visit him–some things never change it seems.  Then, most surprisingly, as I had gotten off the ship in Juneau and was getting the lay of the land, I heard a voice behind me say, “Wabash College!  Pete Schiavonne, class of 1981!”  Imagine his surprise when I turned around and he said, “Tim Guiden, well I’ll be damned!”  Pete and I were fellow Phi Psis and lived together in the house for three years.  The Wabash spouse at Yellowstone was right.  We can’t go anywhere without running into each other.  At least this time I took a photo!”

Wally from the Class of 1991 or 1992, identify yourself and finish our story!