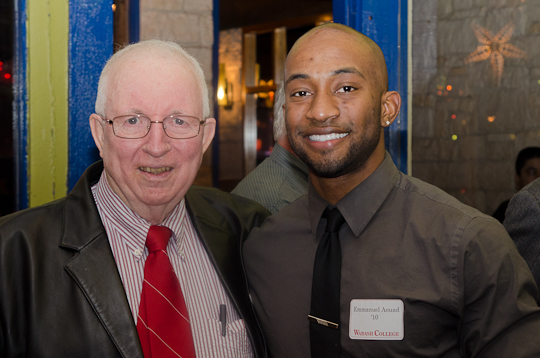 That’s Glenn Pride ’63 on the left.  He’s a Wabash runner.  He’ll be inducted into the Hall of Fame this coming November.  Glenn is a Delt and Bio major.  He told a couple of tales about running on a cinder track at the Wabash dinner on March 7, 2012.

That’s Emmanuel Aouad ’10 on the right.  He’s a Wabash runner.  He also had a storied career at Wabash.  Last weekend, he spent hours watching the NCAC indoor meet on his computer.  Emmanuel is an independent and Economics major.  He told tales about Clyde Morgan and Rob Johnson.  Not jokes – sheer admiration.

Two Wabash brothers in every sense – experiences that will and have lasted a lifetime.