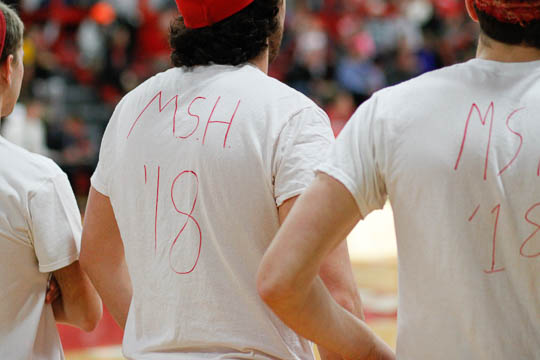 The Sphinx Club Pledges at the DePauw Game

Megan Hammerle, DePauw ’18, is the sister of Connor, Wabash ’15, and daughter of Rick, Wabash ’87. On the eve of Valentine’s Day, she passed away after a brief but devastating illness.  You can’t begin to imagine how tough it is to be a parent and lose a child.  It hurts almost as much for a brother to lose a sister.

Last night it was rivalry night at Chadwick.  DePauw in town to take on the Little Giants.  The Sphinx Club Pledges stepped up as true gentlemen.  Every one had Megan’s initials and her class year on the back of their t-shirts.  The Wabash and DePauw crowd paused for a moment of silence before the National Anthem.

There were so many different things that the Rhynies could have done…this was TRUE CLASS!