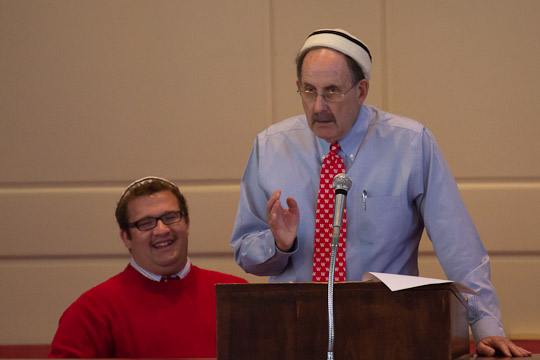 Professor Tobey Herzog drew a tough Chapel talk time slot – a few days after the Monon Bell game and only 36 hours before a playoff game and an entire week off for the students.

But Tobey did what he does – he delivered!

Much earlier in the year, after the Alumni Board had decided to make Tobey an Honorary Alumnus, I asked him to select a Wabash class as his class.  Without a lot of hesitation, he pick the Class of 2011.

Tobey’s senses are keen and he really enjoyed his role as advisor to 11 men from the Class of 2011.  He especially enjoyed watching them grow and expand their horizons.  Tobey talked of a gathering at his house on Freshman Sunday of 2007 and a similar gather only a few weeks before the 2011 Commencement.   The changes in the guys inspired him…and made him proud.  They are, in every way possible, his brothers.  How can you NOT stand with your brothers?

Find it on You Tube when it’s out…you’ll be glad you did.

Tobey is Some Little Giant.