This morning as I was getting ready for work, I was listening, as I do most days, to the Writer’s Almanac with Garrison Keillor. Today, I was surprised to hear, is the poet Ezra Pound’s birthday. There followed a brief sketch of this controversial poet, largely credited with inventing “modern poetry”. As Keillor started to talk about Pound’s brief time at Wabash College – he taught here from start of school in September of 1907 until February of 1908 – I waited to hear what might follow. Imagine my delight when it was noted that although he was fired out of prudery – he was paid the remainder of his year’s salary. The narrative continued by adding that this money propelled the poet to England where he began the literary life that would bring him such success. 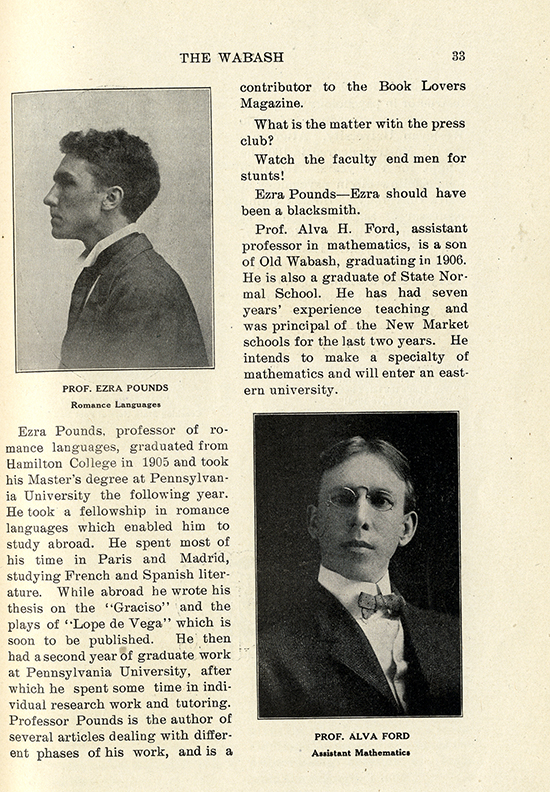 left – Ezra Pound’s Wabash faculty photograph – the only member of the faculty not to face the camera.

Below left – Scan of the College Cash Book showing payout to Pound of $200 (per G.L.M.) authorized by President Mackintosh 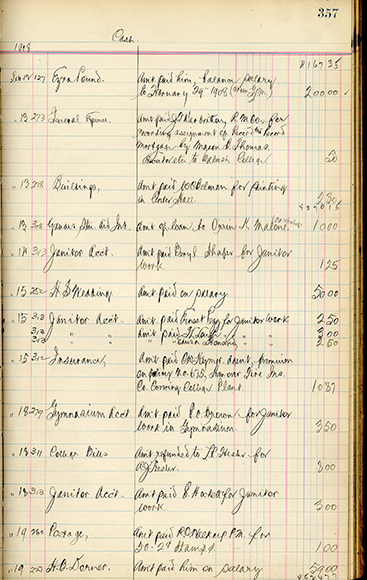 So in honor of the day, I have gathered three links to pieces about Ezra Pound and Wabash College. Each was written by an alumnus, from very different perspectives and all are fascinating looks at this small slice of our history. Enjoy!

“I probably would never have gotten hooked had I not discovered the story on my own. I was studying late one night in the dark recesses of Yandes Library searching through back issues of The Wabash to prepare for a speech about those early Little Giant basketball teams that became national powerhouses. I turned a page and there was the striking profile photo whose caption read: PROF. EZRA POUNDS/Romance Languages.”

“I could hardly contain my excitement as I rushed into the next room and brought back a biographical dictionary. Comparing colleges and dates from the entry on Pound, I quickly confirmed that, in spite of the misspelling of his last name, it was indeed the celebrated poet who had come to teach at Wabash in the fall of 1907.” – Jim Rader [W1960]

“Good Presbyterians have standards of rectitude in financial matters as well as sexual ones,” says Placher. “Wabash had signed a contract with Mr. Pound to pay him a year’s salary, and so they did.” It was the Indiana college’s generous—and probably unnecessary—payout that financed Pound’s subsequent exploits in Italy’s greener pastures. Redman further notes that Mackintosh, typically painted as the villain in the Pound Affair, soon regretted his rash decision to dismiss Pound (and probably sensed the young teacher’s immense talent) and tried to make things right. In a private archive, Redman found a letter Mackintosh had sent to Pound in Europe, asking the poet to return. “Mackintosh was a fair man and reconsidered his decision, either for monetary matters or because he doubted the veracity of the allegations,” Redman says. “In that sense Wabash comes off looking much better in this whole thing.” – Evan West [W1999]

This last address is a link to Bill Placher’s Chapel Talk from November of 2007. You can listen to Bill’s take on the college history of 100 years ago. Included in this talk was a thoughtful look at Ezra Pound and his time here. Pound was hired as the Chair of the Modern Languages Department and taught French and Spanish. Placher concluded with some of Pound’s poetry and thoughts on the future of Old Wabash. It was a remarkable Chapel Talk, one I still love to hear.

I hope you have enjoyed these links to Ezra Pound and, on the poet’s birthday, thanks to these three Wabash men Jim Rader [W1960], Evan West [W1999] and Bill Placher [W1970] for sharing their views on this complex and controversial former member of the Wabash faculty.