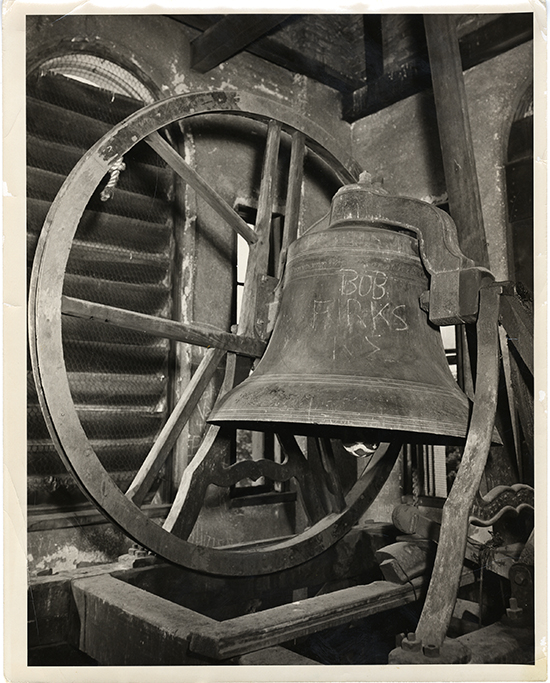 The college bell in Center Hall. The clapper was highly prized, the bottom of this clapper has been painted by a prankster.

For nearly 150 years the Center Hall bell called the men of Wabash. The bell called them to class and it called them to Chapel, as it does yet today. The bell rang in celebration at the end of the Civil War and rang in mourning at the death of a member of the Wabash family. With such a high profile, it is not surprising that the bell has also been at the center of a great many student pranks. One of the most common was to snatch the clapper. 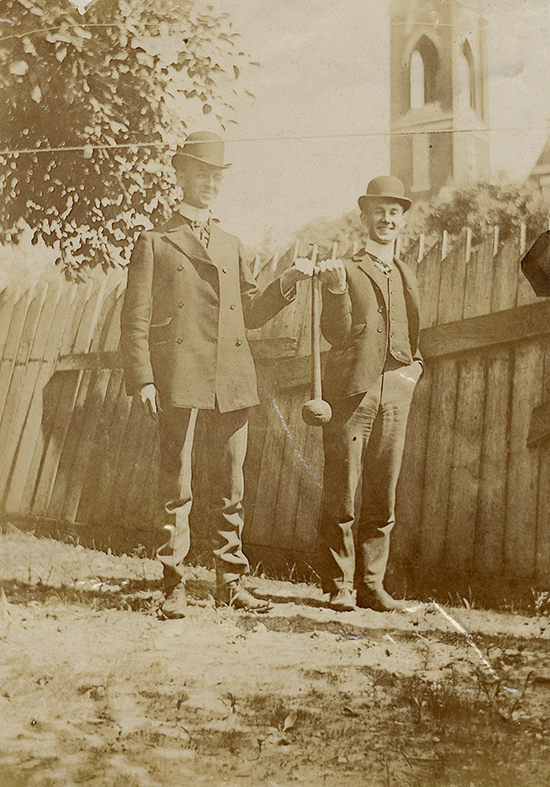 Funkhouser is pictured on the right. In the background we see the spire of the Center Church at the corner of Wabash Avenue and South Washington Street.

In the photo you can see these two students proudly displaying their prize. There was one student so noted for this feat that it was said of him that at any given time he had at least two clappers in his trunk. William Delbert Funkhouser (W1905, pictured at right) was a lively student and Athletic Association Yell Leader in 1902.  Smart as a whip, this scamp went on to become the beloved Chair of the Zoology Department and Dean of the Graduate School at the University of Kentucky.

The Funkhouser building located on Funkhouser Drive is home to the registrar’s office and student services. Named for our man, the building is a tribute to his immense impact on generations of students. He was as passionate about teaching as he was about pranks and often combined them. A graduate of UK once told me a story about Funkhouser teaching a zoology class. He was explaining the characteristics of a rather nasty snake and would then pull that very snake out of his shirt where it had been coiled around his middle since the start of class. Needless to say, he made quite an impression. Indeed, as I look out over the history of this place I see that the men of Wabash are a spirited bunch, and Funkhouser was no exception.