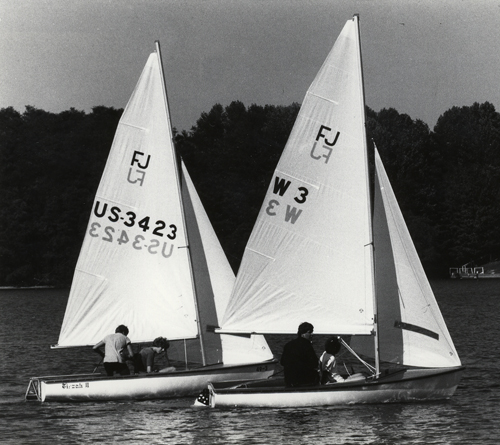 This is photo taken by Joyce Warden of the boats launched at Lake Holiday just south of Crawfordsville by the Sailing Club in September of 1972.

Last Friday the Wabash Sailing Club gathered under cloudy skies at Lake Holiday to christen its two new Flying Juniors. The boats were gifts of John Collett, President of the Board of Trustees, and August “Bud” hook, President of Hooks Drugs. The MC of the event was Dr. Thaddeus Seymour, President of Wabash College. He introduced club secretary and racing team captain Mark Dewart, who gave a brief history of the club. Dr. Seymour then presented to Mr. Collett a glass on which was etched “Tirzah II, Sept. 29, 1972” Then Mr. hook received a similar glass with the engraving “OOK, Sept. 29, 1972.” A bottle of champagne was opened and the glasses filled. Mr. Hook poured the champagne over the bow of the second boat and shouted its name (pronounced “double o.k.”). Collett then performed the same ceremony for Tirzah II (pronounced “tears ah”).

Following the singing of a sea chantey by Mr. Collett, the glasses were refilled and a toast was drunk to the new boats. The group then moved to a picnic held at the home of Professor Chuck Shue, faculty sponsor for the club. Unfortunately, other engagements prevented Mr. Collett and Mr. Hook from attending.

Here is a closeup of the sailors.

And one of the OOK, sailing away. 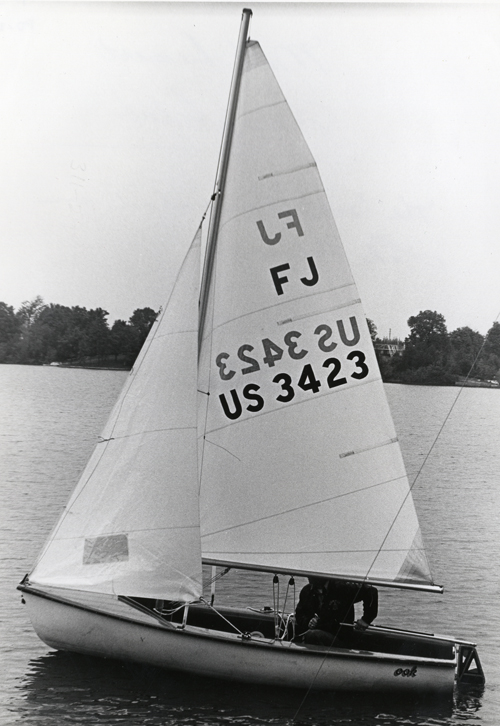 I love these pictures and on this lovely sunny day, sailing seems like a perfect idea!