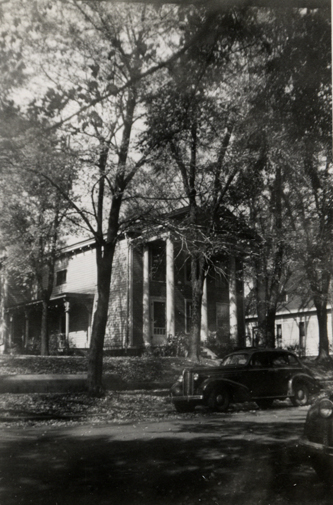 I am always interested in the built environment and I am particularly interested in historic structures. While driving across town a couple of days ago, I passed by 611 South Water Street and noted that its front was under construction. This old house is of great interest to those who think about and study the history of Wabash College as the links between this house and the college go all the way back to the 1840’s.

The tale of this home begins with our second president, Dr. Charles White. From an article in a 1958 issue of the Crawfordsville Journal and Review, “After the death of President Baldwin, the first president of Wabash College, in 1840, the trustees of the college, through the recommendation of Prof. E. O. Hovey, who was a tireless worker for Wabash in the early years, selected Dr. Charles White of Owego, NY, to succeed him. Since Mrs. Hovey and Mrs. White were sisters, Prof. Hovey was well acquainted with Dr. White, and knew that he was a man well prepared to serve the college as president…” 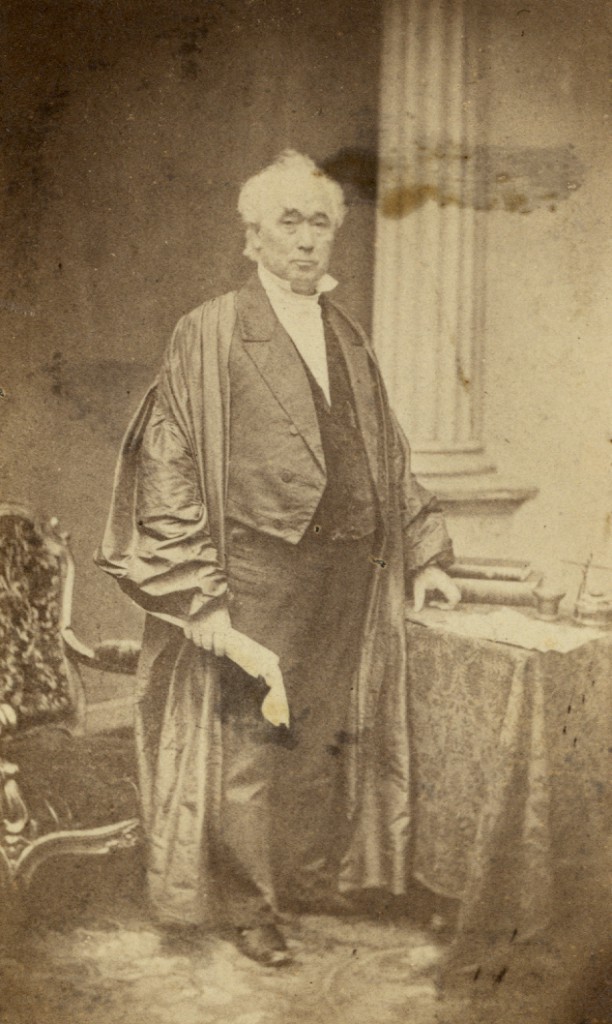 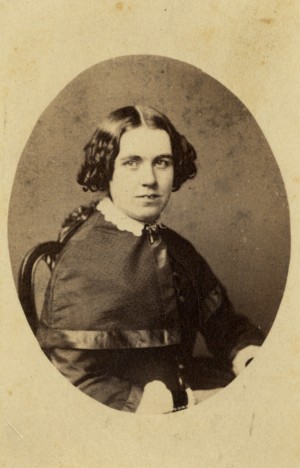 The sisters were delighted to be together in the same town and in anticipation of this event, Mary Hovey wrote a letter to her sister Martha in July of 1841 describing the lot which would become the White’s homestead, “The president’s lot (as we have always called it) is distinctly visible from where I am sitting. Its beautiful swell of green is very attractive to the eye as it rises a few rods southeast of the college. I never look at it without having my heart swell with emotion at the thought of the attractions it will probably possess by another fall. The expectation is that Mr. White will rent for one year and during that time a house will be erected upon the site of which I am now speaking.”  By April of 1842 the Whites were living in their new home.

Here are pictures of the sisters… 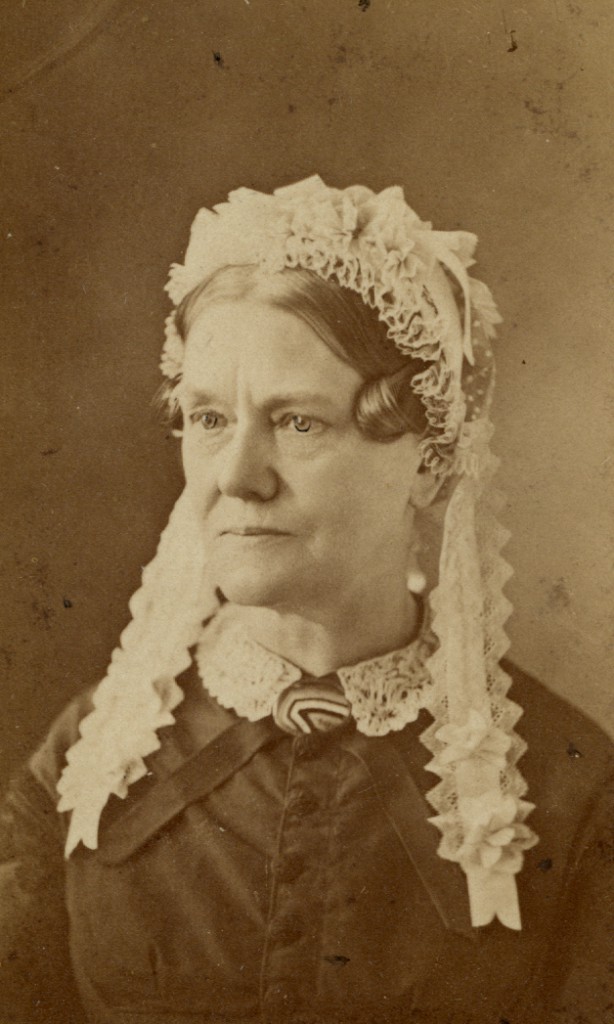 The house came to be known as White Hall and this map, a section from the 1878 Atlas of Montgomery County, serves to show where the lot was in relation to Wabash. 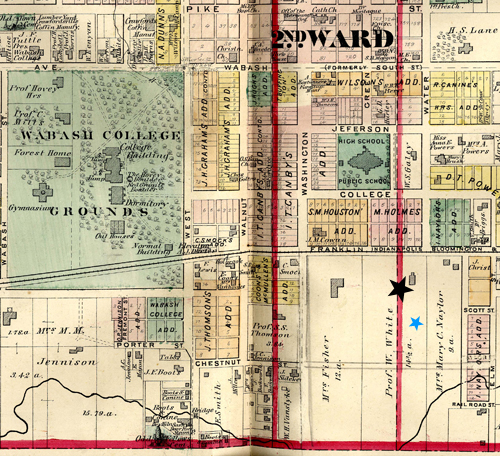 The college is the large green rectangle on the left and the black star is the where the home was originally built. If you look again at the atlas image you will note a blue star also. This is the current location of White Hall. When the Indianapolis, Bloomington and Western rail line was built it ran down the center of Franklin Street. In the early 1880’s White Hall was turned to face east and moved south to its current address on South Water Street.

Here is a zoom image of the White land, with the size listed as 14.5 acres.

The Whites were a happy, loving family and lived in White Hall until their untimely deaths in the early 1860’s and the home was jointly inherited by their children. The next occupant was William Carter White [W1852]. William was the son of President White and served as Professor of Rhetoric and Oratory at Wabash for twenty-two years. When he retired from the college in 1884, he and his wife Fannie moved to California. It was at this point that the house was sold out of the family and moved to its present location.

From its time as the president’s home through the years as the gracious home of a leading member of the faculty, White Hall was a center of college life for over four decades. Clearly a well-built home, its presence continues to serve as an anchor for South Water Street. 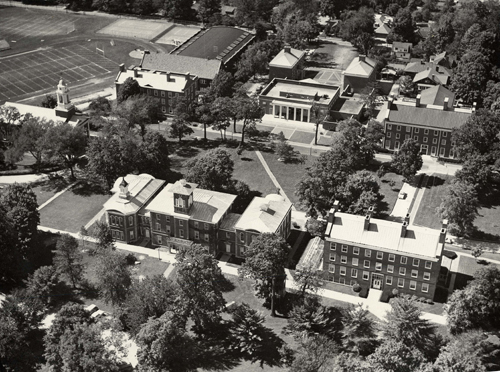 This photo is an interesting view of Wabash, a view of the college in transition. the brand new Campus Center and its dormitories are in place. In front of what we know as the Sparks Center we can just barely see the holly tree which was planted by Byron Trippet. The tree is small and in the shadow of the larger tree across the drive.

We see the new Lilly Library and Waugh Hall minus its later addition, Thomas Labs. Interesting to note that in this photograph, there is a road from the library to Waugh Hall, which is gone now.

On the south end of campus we see that old South Hall is missing and Baxter Hall is yet to be started.

This is a great picture to document the changes on campus. The decade of the late 50’s to early 60’s was a time of tremendous change. How nice that we have this picture to study these many years later. 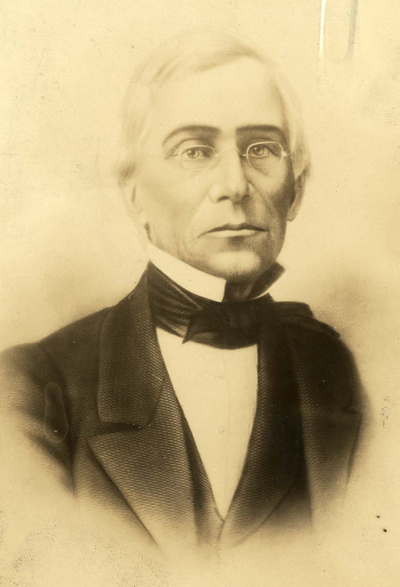 To all who are familiar with Wabash history, the name Caleb Mills and his connection to this college are as clear as the tone of the bell that welcomes our freshmen and rings out our graduating seniors. The first member of the faculty, Mills is widely considered the father of public education in the state of Indiana. Through statewide lobbying – before that term had ever been used – Mills created a groundswell of public opinion that for a state to prosper, it must educate its children and that it was the job of the state to do so. So while we all know a bit about Caleb Mills, his son Benjamin is much less well known. 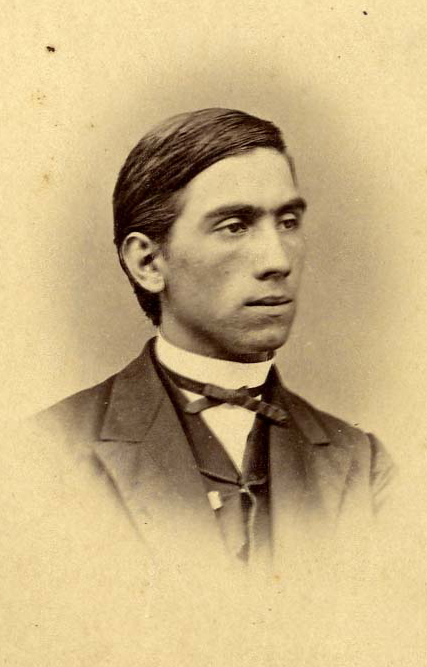 Benjamin Marshall Mills, only son of Caleb and Sarah Marshall Mills was born in Crawfordsville on November 17, 1846. Known to friends and family as Marshall, this young man grew up on campus and attended prep school here as well. Well liked and widely respected, this boy grew to manhood on campus. When he was old enough, he joined the Union Army serving as a First Lieutenant with the first division of colored troops of the Army of the Cumberland, serving at Vicksburg, Mississippi for 16 months during the Civil War. Upon his return home, Marshall finished his classical program and graduated with the Wabash class of 1868. He immediately began his study of medicine with two local doctors, but within six months Benjamin was dead.

The entire campus mourned and here is an excerpt from the Wabash Magazine of March of 1869. This was a tribute from his fellow students, “On the 9th of January, 1869, in the twenty-third year of his age, B. Marshall Mills died of pneumonitis, coming on in the course of hasty consumption. The tones of the college bell, as they were borne upon the evening air, fell like the chill of death upon many hearts. We have often stood by the deathbed of dear friends, but never did it seem so hard to realize the work of death in one who had so long held the place of friend and brother…His views of life were true and noble. In the choice of a profession he was guided by the desire to do good, and had his young life been spared he would have achieved a good life-work. His aspirations were high and worthy, his hopes and expectations bright…He was frank and genial in disposition. His large heartedness and warm impulses won the esteem of all who knew him. His heart was trustful, forgiving, loving…We knew him most intimately the last five years of his life, and gladly we bear this testimony, that [his] life, as known to us was blameless, his motives pure, and his purposes high and noble. And in paying this imperfect tribute to his memory our pen moves sadly, as recollection call up the many pleasant associations of college life and life in the real world. How often have we grasped that right hand, now cold; how often has its pressure assured us of welcome; how often have the beams of those eyes, now closed, lighted us to the secret recesses of that soul of whose esteem we felt sure; how often has that face, lit up by a smile, been but the window of the soul, through which we looked to a heart warm and trusting, now cold and still, while the great heart of the world rolls onward and over it. Soon his memory will pass from the mind of many, but in the hearts of some it shall live while life lasts.”

As we might suppose, the father was greatly affected by his son’s death. At that time Caleb Mills owned a great deal of land just north of Wabash and this land included a cemetery which was located behind the current Phi Psi house. The entrance to the cemetery was just off of a small street to the west. It was this street that Caleb Mills named Marshall, in memory of his only son. So as I come and go from campus, I often drive on Marshall and think about the young man who died too soon. What might he have added to Old Wabash in the fullness of time? 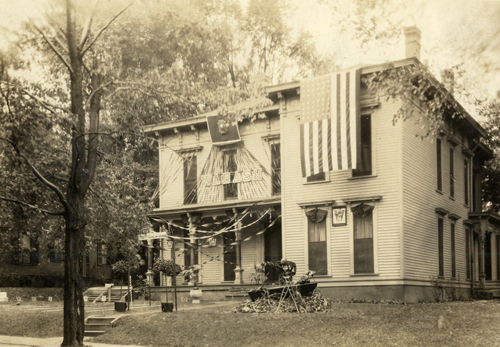 This is a photo of the first Beta Theta Pi house at Wabash. Prior to the purchase of this home, the Betas as well as the other fraternities, had rented space in the upper floors of buildings downtown. It was in these halls that our fraternity system grew. But change was on the horizon as the Phi Gams became the first of the Wabash fraternities to purchase a home and have all of their members living under the same roof. The other fraternities soon adopted this idea and according to an excellent essay by G.B. Landrigan in the book Tau of Beta Theta Pi – 150 years at Wabash, “Beta Theta Pi was at an unaccustomed disadvantage for purposes of rush.”

So although the men of Beta Theta Pi were not the earliest adopters of a residential fraternity on campus, what is interesting about the Betas is that they are the only fraternity on campus still in their original location. The other fraternities have moved over the years, but the lot at 513 West Wabash Avenue has always been home to this fraternity.

The home was originally built in 1876 by Alexander Thomson, brother of two of our founders and for nearly three decades the treasurer of the college. In 1906 several members of the chapter were renting rooms at 513 West Wabash and, after much thought, it was decided that the chapter would rent the entire house.

The frame house pictured above was extensively remodelled in the 1920s.  Here is a picture of the finished project and the sharper eyed reader might also notice Byron Trippet in the chapter photograph. 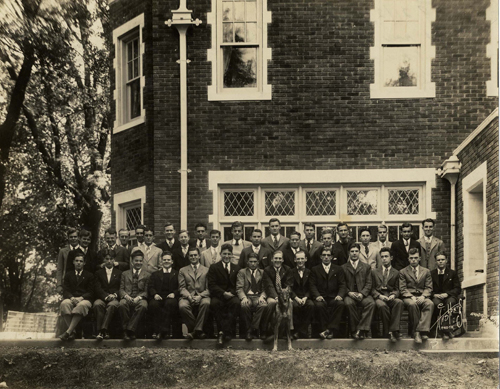 The house changed from a frumpy old frame house into a lavish home with a strong English feeling. It was this house that served for the first half of the century. Old as it was, it had its creaks and groans and was hot in the summer and cold in the winter. By the 1950s it was clear that a new house was needed.

In 1961 the “old barn” was demolished and the college began to build a new house on the same spot. All alums from the past 50 years know it well. And although it was again extensively remodeled, 513 continues to be the address that all men of the Tau chapter of Beta Theta Pi call home.