It is sometimes hard to describe the artifacts that we hold in our collections in a few brief words. In the case of this earthy treasure it couldn’t be easier. This is a jar of dirt.

Of course this is not just any old dirt – but dirt from the groundbreaking for the Pioneer Chapel. Held on Founder’s Day December 3, 1927 (a nod to the opening of classes in 1833) the groundbreaking was a tremendous affair on campus. The trustees were gathered along with donors, faculty, alumni and students. The man chosen to wield the shovel was  Theodore Harmon Ristine [W1865]. 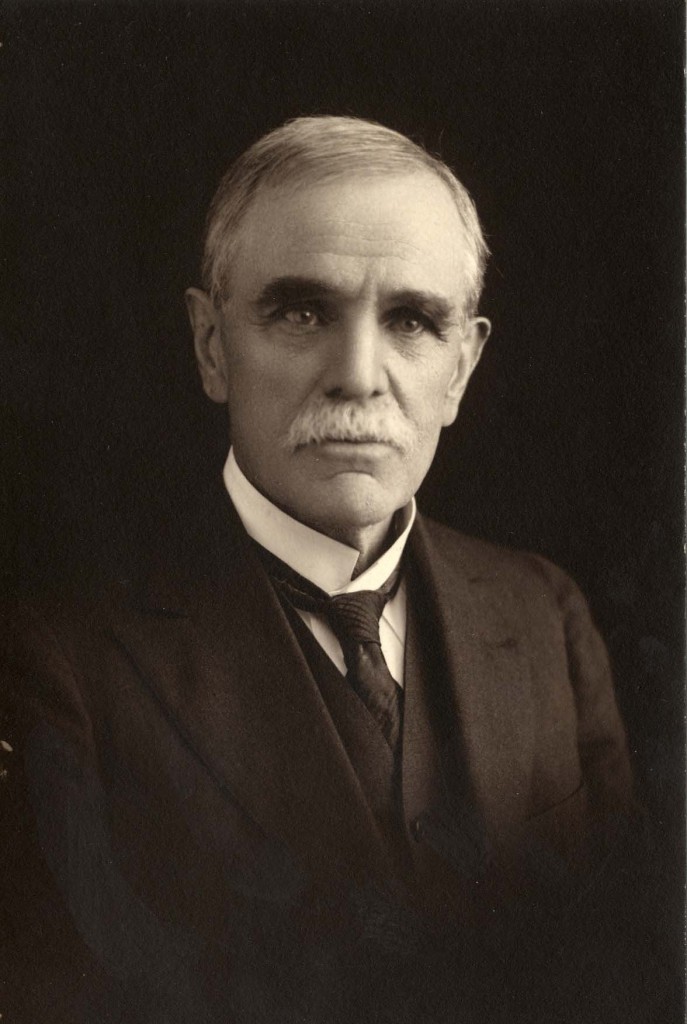 One of the many Ristines who helped to build and grow this small school, Theodore was a trustee of the college for nearly half a century. For 23 years he was the secretary of the board and served for 20 years as the treasurer of the college. He was also the grandfather of Dick Ristine [W1941]. Dick often told stories about being a little boy playing under his grandfather’s table while the business of the college was conducted. 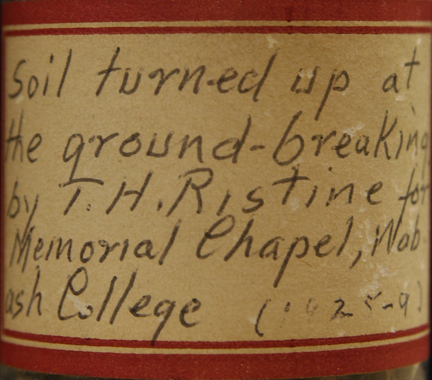 From the listing of the posts Theodore held it is clear that there would, indeed, have been a great deal of college business discussed in the Ristine household.

Just a few weeks ago, I read something that Dick had written about this very event, “This reporter well remembers being there and watching his grandfather, T.H. Ristine, turn the first spadeful, while wondering why they quit after that one spadeful.”

To close I will say that this is an easily described artifact. It is straight forward – this bottle is full – a simple bottle full of common Indiana dirt. But when thinking about it for just a moment I see that this old bottle is full of stories. They are the stories of a small college and the generations who have loved it so well that to some it really is dear old Wabash. 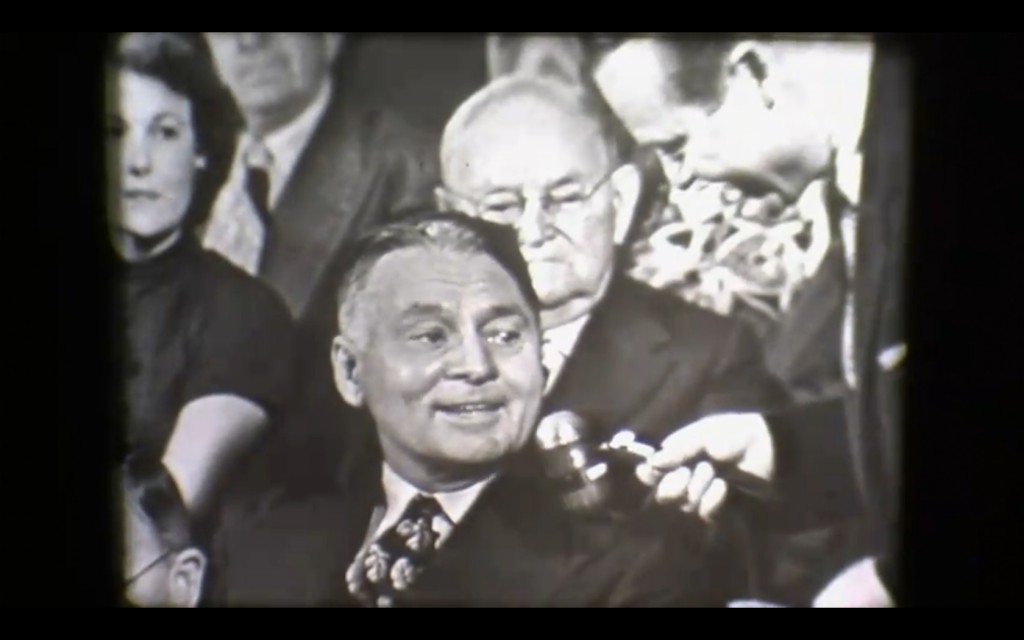 Sparks with Ralph Edwards as he hears the famous line

So begins the latest addition to the Wabash College You Tube channel called From the Vaults which can be viewed at this link:

Once again, thanks to the magic of Adam Bowen and his whiz kids in the Media Center here at Wabash, we can all walk back in time! All that way back to 1953 when at the end of the broadcast Ralph Edwards tells Sparks that he will be receive a copy of the program along with a “Movie Mite 16mm sound projector” described in length by the host. The projector is long gone, but the film has been here on the shelves for nearly 50 years.

It turns out that President Sparks’ family and friends had been working on the project for eight weeks without his knowledge. At one point in the show Sparks asks how this all came about to which the host responds that he knows Will Hays, trustee of Wabash and head of the Motion Pictures Producer’s Association and his son, Bill. Indeed Mr. Edwards and Bill Hays were very good friends as Bill wrote for Edward’s show.

The story of Frank Hugh Sparks’ life is indeed one worth telling and I will leave it to you to watch the program if you like. But to summarize the plot, Sparks worked his way to the top of the business world as a co-founder of Arvin Industries – makers of radios and televisions among many other consumer goods. Approaching the peak of success in 1929, Sparks decided he wanted his life to go in another direction and he enrolled in college.

Frank attended Butler in Indianapolis while his son Joe attended DePauw in Greencastle. Joe tells an excellent story about how with some complicated withdrawing and enrolling, the father became a student at DPU just long enough for both Sparks men to become Betas together.

The show is just full of these cute stories that illustrate the drive and determination of our President Sparks. There is a small section on the “Big Idea” that Sparks helped to start, which was that business was the primary beneficiary of the product of a private liberal arts college and should therefore support them. Through this work the Independent Colleges of Indiana was founded to facilitate fundraising for Indiana’s small, private colleges. A blueprint quickly adopted right across the country.

Perhaps best part was seeing Sparks’ grandkids on the stage. The first child onstage was Irene, Sparks’ granddaughter. I met Irene a few summers ago when she and her daughter and grandson were visiting the college. It turns out, this was a college visit for that young man who graduated last spring in the class of 2010. A great Wabash man, Anthony visited the Archives often. On commencement weekend last year Irene dropped in and we had another friendly visit and the family donated a number of President Sparks’ diaries.

When we first met, the conversation was peppered with Irene’s memories of her grandfather and visiting him on campus. One of the things that I so clearly remember was when she said that she was the little blond girl on her Grandfather’s lap during the TV show This is Your Life. In the video online, she looks just tickled to be there. Here is a screen shot of that segment… 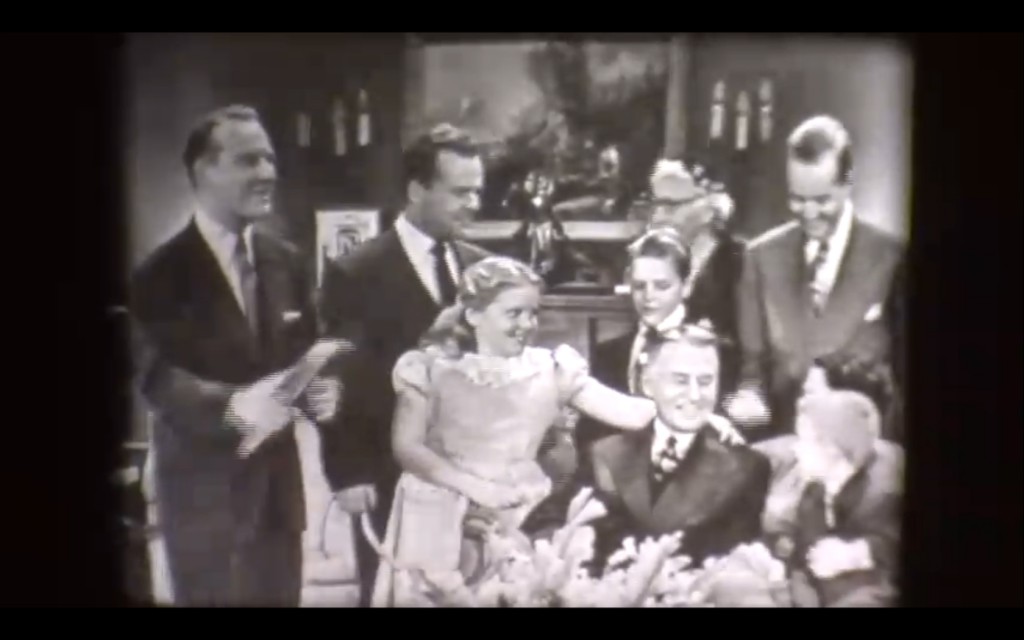 The show was a big hit with audiences as is shown by the number of letters Frank Sparks received from viewers. It also was just great publicity for the college. Among the images projected was a shot of students crossing campus with the Chapel in the background.

I hope you enjoy watching this blast from the past with Wabash’s own President Sparks and his family and friends. To see these people walking and talking nearly 50 years later is just a treat, thanks again to the Media Center for making it happen!