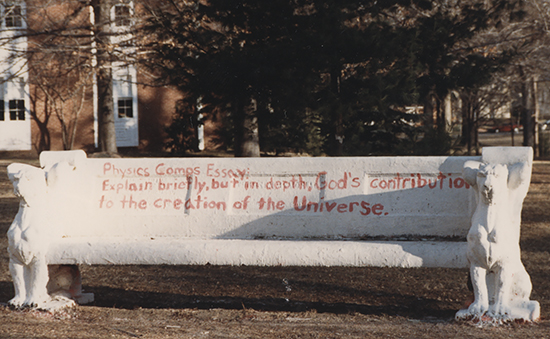 The campus is quiet as most of the students are still at home enjoying that last bit of winter break, but for the seniors it is a different story. The Lilly Library is fairly buzzing with activity as seniors gather in groups or study earnestly alone. In a long and fiercely held tradition these young men must pass one final hurdle on their way to the sheepskin diploma and the end of their undergraduate days. Comps are here!

First held in 1932, the comprehensive examination is 84 years old and came out of the new curriculum adopted in 1928. The class who entered in the fall of that year was the first to study four years under the new system and the first to take a senior comprehensive examination which they did in the spring of 1932.  Among other reforms, the “new curriculum” created our divisional system – originally four, now three, divisions. The reform also instituted Contemporary Civilization, a course to be taken by every student. CC, as it was known, morphed into Cultures and Traditions which then became our current Enduring Questions and is still taken by every student. Other changes were instituted as well and, as is common with such a big change, it was not popular with everyone. Entrance requirements were increased and the days of athletes dropping in for the season and playing games while little bothering to attend classes were over. As you might guess the faculty approved, but a very vocal group of alumni did not. President Hopkins came under fire but he was determined that Wabash was first and foremost an educational institution and  our athletes were to be students first, athletes second. It was tough on the president, but he persisted.

So from that time to this our seniors have studied like mad, crossed their fingers, held their breath and stepped up to “demonstrate a mastery of their subject of study” as comps were originally described. It is a bond that all Wabash graduates have shared for 84 years now. It is a rite of passage that all Wabash men contemplate and celebrate once it is over. Good luck guys!