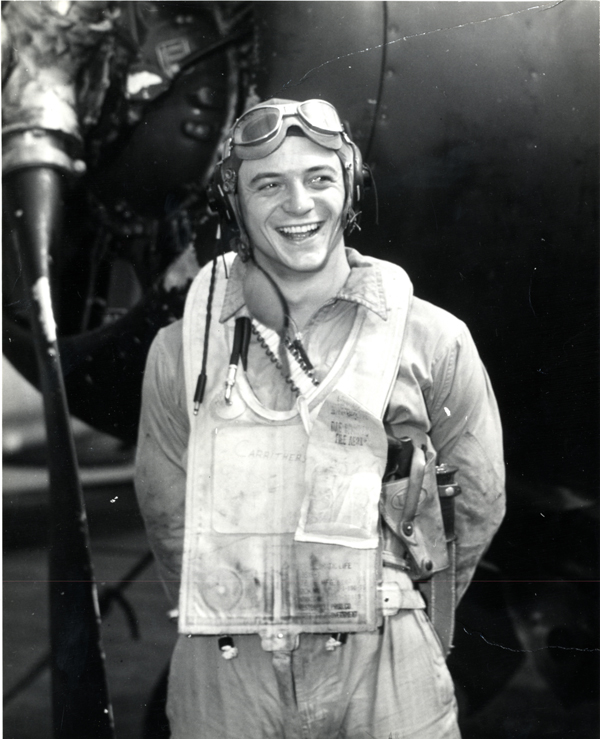 While scanning some pictures for a Civil War project, I came across this great photo. It was so engaging that I wanted to know more about this young pilot. Here is what I found…

Robert Dawes Carrithers – known on campus as “Jim” – was from Toledo, Ohio and the son of a Wabash man. He entered Wabash in the fall of 1941 and pledged the Phi Delta Theta house, as had his father.
He was involved with many activities on campus  – the news bureau, the Sphinx Club and also played football.  By late February of 1943 he had withdrawn from Wabash and was on his way to active duty with the Naval Air Corps.

Here is a press release from the Navy regarding his service in the Pacific in WWII, “Ens. Robert Dawes Carrithers, 22, USNR, Toledo, OH, pilot of a WILDCAT fighter, is returning to the States for leave after completing 58 combat missions including air-support strikes at Iwo Jima and Okinawa. One of the incidents in his Pacific duty occurred at Okinawa when a large explosion on the ground smashed through the cockpit window and wounded him in the face. Later, he was able to land aboard his carrier safely….Ens. Carrithers, son of Mr. and Mrs. R.T. Carrithers, wears the Distinguished Flying Cross, and an Air Medal with three Gold Stars for repeated awards of the same medal. Before entering the Navy in November, 1942, he attended Wabash College, Crawfordsville, Ind.”

After the war, Carrithers returned to Wabash, completed his degree and, like so many millions of other veterans, went to work, first in Chicago then at Boeing where he was an industrial engineer for many years.  Carrithers died at the age of 59 in 1983. He was much admired in his community where he played an active role as commissioner.

So while looking for Civil War veterans I also found this World War II veteran’s photograph. A great picture and a great story too!