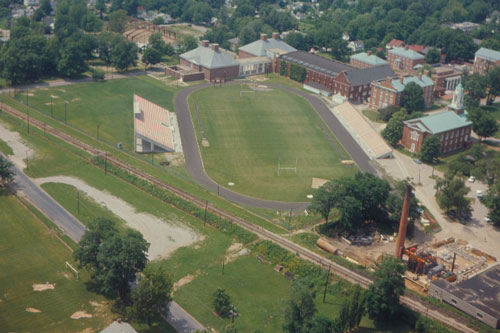 I thought that as we start a new semester that it might be fun to see Wabash College as it was for so many Wabash men.

The image above is centered on the athletics facilities. In the mid-60’s there was an expansion built on the western side of the gym. This included a swimming pool and additional training facilities. Just at the top of the picture we see a steel structure rising. That is tremendously helpful as it tells us that these photographs were taken in 1968. The indoor tennis facility was a gift from the President of the Wabash College Board of Trustees, John P. Collett [W1924] and was dedicated on May 31, 1969.

The new stadium is in place and in the middle of the bottom of the image we see the start of soccer with a goal at Mud Hollow and the power plant is under construction. I should also note that at the upper left of the picture we can see Crawford Street – still open from Wabash Avenue. 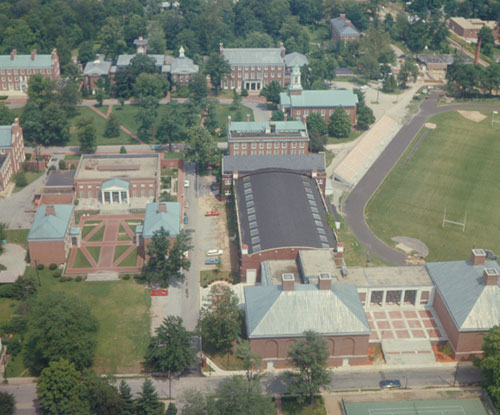 In the second image, we see the drive that went from Crawford Street to the mall, now closed. We can assume that underclassmen weren’t afraid to drive under the arch. On campus today, no student will walk under the arch for fear of ominous consequences. In fact, the class walking under the arch together has become a part of commencement in the past few years.

The Sparks Center – still known as the Campus Center at the time of this shot – is still looking brand new. No trees shade the courtyard as they do today.

The area that is now the Allen Center fitness room was an open courtyard. The two buildings either side of that courtyard and the adjoining atrium were at the center of the new McCanliss Athletic Center, named for Lee McCanliss [W1907] past president of the Wabash College Board of Trustees. By the mid-sixties it was clear that the old gym and armory were out of date. There were plans submitted that included the design in the third image. New, modern and really rather “Jetson-like”. When Lee McAnliss saw these plans he decided to donate a good portion of the money for the renovation and expansion of the athletic facilities. But there was a catch, in return for his donation, he could choose the architect. He returned to Eric Gugler, the New York architect who gave Wabash its distinctive look in the middle of the 20th century. Gugler’s first building on campus was Waugh Hall, followed by the Campus Center and Wolcott and Morris dorms. The Lilly Library is a Gugler building as well. So, with the funding secured, the build was on and the McCanliss Athletic Facility was dedicated on June 1, 1968.

With that last bit of construction, the “new” old Wabash was complete. It would be another thirty years and more before significant changes were made to the buildings on campus. The work begun in the Ford administration on buildings and grounds changed the landscape again.

I hope that you have enjoyed these images of Old Wabash from over 40 years ago. Wishing you all the best in the new year,