In the last post I featured some images of our town, all centered on one main intersection. In this post, I thought I might share a few more images of this area. Below is another image from Main and Washington Streets, but this time looking north and showing the Interurban coming up the street. We can see the electric plant in the far right background. 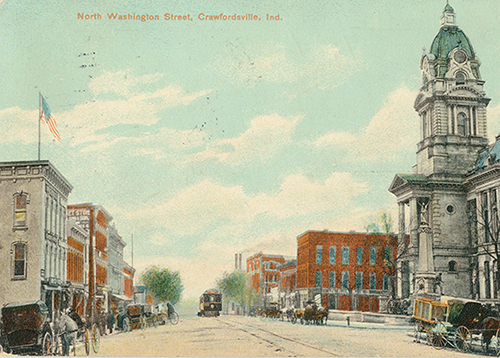 This next image is of the Big Four Depot on Washington Street at Franklin. Some may remember this spot as the A&P or Crawford’s grocery on South Washington Street. This will be the site of the new Fusion building which is a part of the Stellar grant here in town. The tracks in front will be removed and this will become a biking and hiking trail connecting to the rail trail west of town. Townspeople are really excited about this work which will spruce up the area in a big way and provide tremendous access to the western trail! 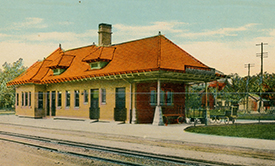 Speaking of the Stellar grant recently won by the city – the Ben Hur Building, pictured below,  will be rehabilitated as a part of that grant. This is a picture of it at night when it was newly built. I love the lights on top and the big windows on the front and east sides. These windows were for a furniture store on the main floor and were later partially filled in with glass block. It will be interesting to see if they are reopened. Look just to the right, or west, of the Ben Hur.  This little nook was occupied by a cozy place called the Aero-Dome theater. 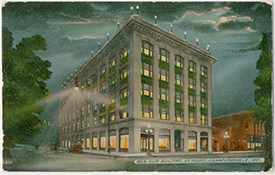 Here is a closeup of that area of the image from a daytime view of the Ben Hur. 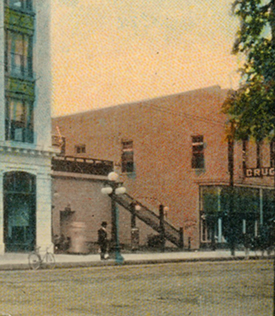 It was an outdoor movie venue. The building to the right of it the Aero-Dome is now Little Mexico. The Aero-Dome didn’t last terribly long before it was replaced by the Dobe Inn. This ad was scanned from a yearbook. It sounds like a great place to meet after a dance or a game.

The Inn was across from the Post Office, but lest you land in the wrong block, it was not the same post office that we know today. Here is the previous iteration. 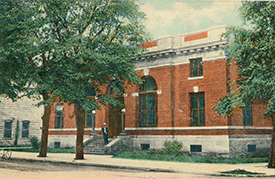 This was on the north West corner of Main and Water streets, where the one we know is on the north East corner. There is a drive up bank on that corner today. 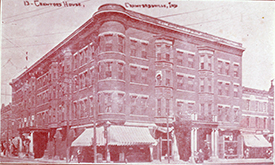 Another landmark that is gone from our downtown is the Crawford House Hotel, pictured above. It was a massive hotel and occupied the space where the Marie Canine Plaza and the parking lot are now. Here is another view of that giant. 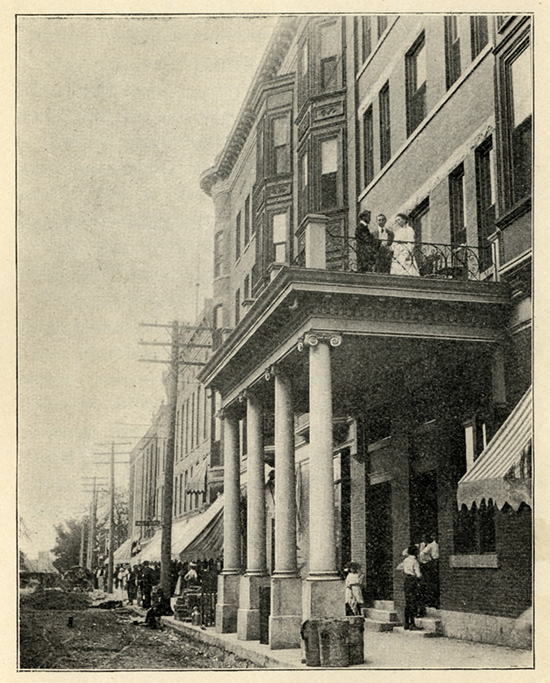 This picture was scanned from one of James B. Elmore’s books. It is a closer look at the hotel, looking north up Green Street. Some might know this block as the street that was later home to the Pizza King or the Green Street Tavern. The next image is a view of the Crawford House from Main Street looking west, with the hotel on the right about halfway up the street. An estimate of era would place this picture in the later 1800’s or early years of the 1900’s. This is our town as seen by Ezra Pound. 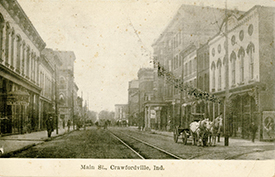 This is a picture from a little later, as we now have automobiles. Look at the cables over the street. These powered the streetcar which ran up and down Main Street. And the building with the tower on the right of the picture is the YMCA. This is the place where basketball came to Crawfordsville via an instructor fresh out of  Y training where he was taught by James Naismith, inventor of basketball. The game was Naismith’s effort to keep men active in the cold, northern winter. This postcard gives us a closer look at the front of the building. This area is now the parking lot for the PNC Bank here in town. 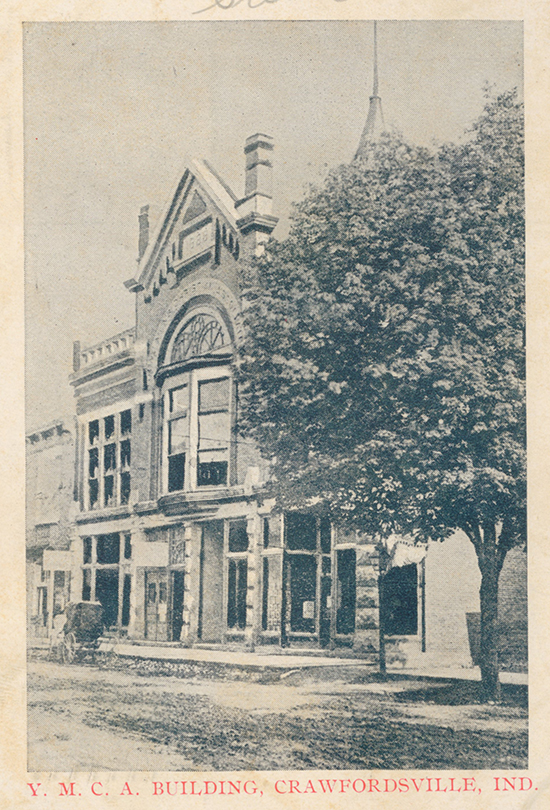 This is the very gym where Hoosier Hysteria started in this area. Look at the closed nets. This image is from the Wabash Magazine of June, 1906. It was in this gym that Piggy Lambert learned to play basketball. It was here that the first Wonder Five of Wabash history played. It was a rough and tumble game and I have read that players used every advantage, including running up the walls, to score. 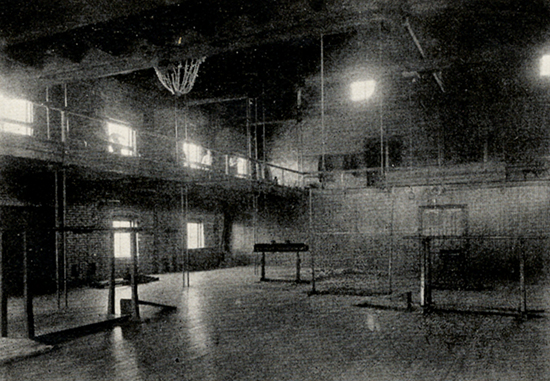 This next picture is of the old St. Bernard’s church on the south east corner of Washington and Pike streets. This building was torn down and a new First National Bank [now Chase Bank] was built after St. Bernard’s moved to a new, modern church on East Main Street. On the corner is the church, behind it at left is the Catholic school and on the right of the picture is the Rectory. 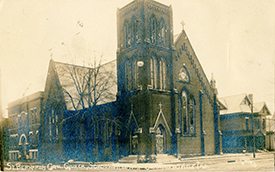 This image is an architect’s sketch of the “new” high school.  What a lovely building it is and happily still in productive use as apartments and home to several community services. 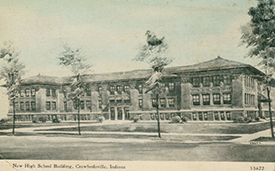 Below is the old Mills School on West Main Street, this building was replaced by a modern, flat looking building and the Kathy Steele playground which now serves as a park to the neighbors. Note the streetcar tracks in front of the school. These led west to a maintenance shed, now occupied by a pest control company. 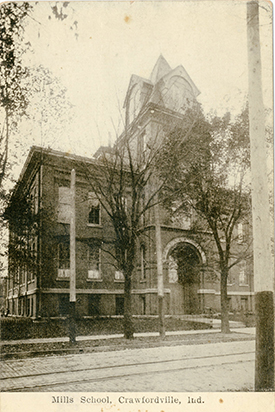 This is the old Willson School which was built on the corner of East Wabash and Wallace Avenue. This building looks so much like a castle, one can imagine tiny elementary children in awe before it. It was an amazing building in appearance. 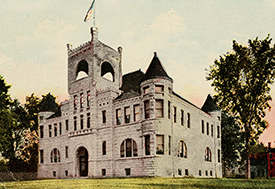 Here is one last school, Tuttle, which was named for Wabash’s third president Joseph Tuttle. This school was torn down in the mid-20th century and replaced by a new, modern, flat roofed building. That too was recently pulled down to build the new Crawfordsville Middle School. Gone is the Tuttle name.

Let me close with this image, which is in the same style as many of the others. Below you see the Ben Hur Terminal Station which was on Washington Street just north of the courthouse. This block was taken down some years ago and a  parking lot created by the county. 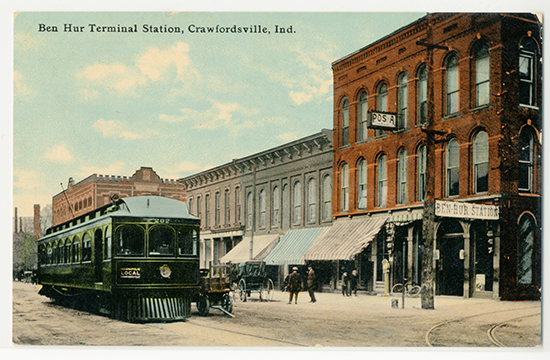 The interurban was a tremendous asset to our town as it afforded cheap and easy transport to Indianapolis for our students and townspeople. Not uncommonly the really big games were played in a much larger stadium in Indianapolis. At that time, athletics were funded by the gate receipts. Our students would hop on in downtown Crawfordsville and hop off in the big city. How very convenient!!

I hope that you have enjoyed these pictures of our town. Always interesting to see how it has changed over the decades!