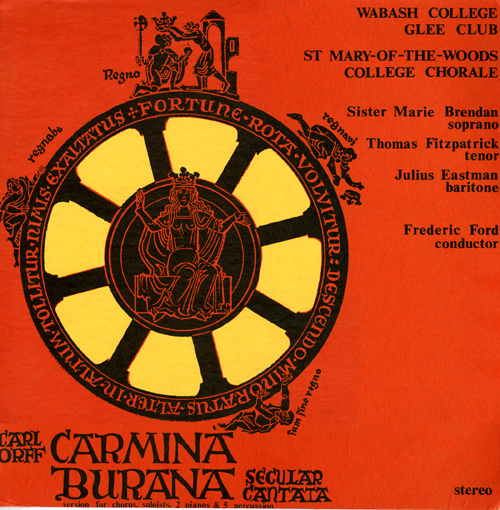 The Big Bash, the annual alumni reunion weekend, is a relatively new idea at Wabash. And from all accounts, it is a big hit! It used to be that our reunions were held during commencement weekend. That was a bit of a crush, so a few years ago Wabash moved the alumni reunion to the first weekend in June when the whole college is totally focused on returning alumni. This year the Bash was as lively as ever. The Lilly Library was hopping with alums and their families. It was wonderful to see so many people laughing, chatting and reminiscing.

As so often happens, alums bring things to the Archives. What a delight to see these items, many of which are one of a kind. Among the things left with the Archives this year was an unopened copy of this album, a recording of the cantata “Carmina Burana.”

This was quite a project, a joint performance with the Wabash Glee Club and the St. Mary of the Woods College Chorale. Here is a copy of the liner notes listing the performers and a description of the work… 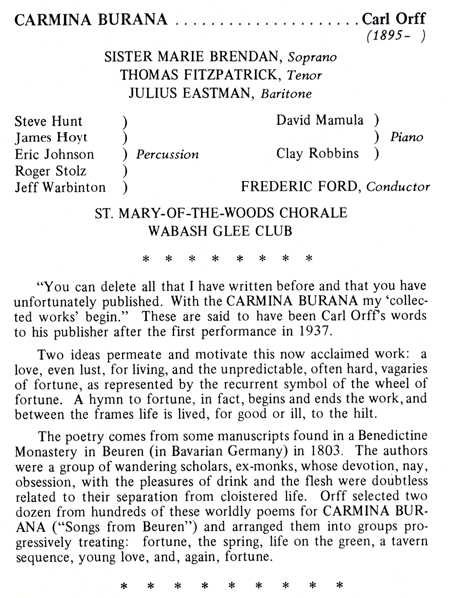 Just this week I received a request for a copy of this performance. Thanks to Adam Bowen and Josh Mitchell [W2013] in the Media Center, now anyone can hear this amazing work!

Here is a You Tube link:

While you are there, be sure to check out the many other items Adam and his good men of the Media Center have added…talk about time travel!!! 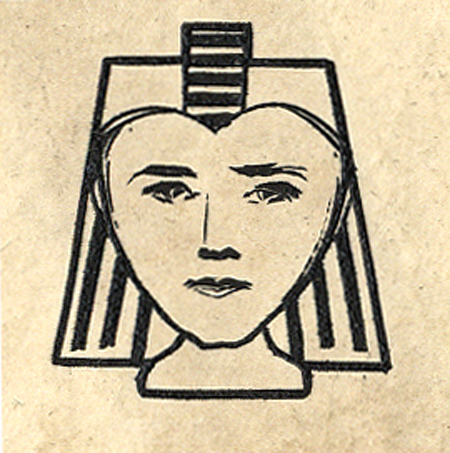 In this posting I would like to share the story of the founding of the Sphinx Club on campus. This is from The Bachelor of December 16, 1921. 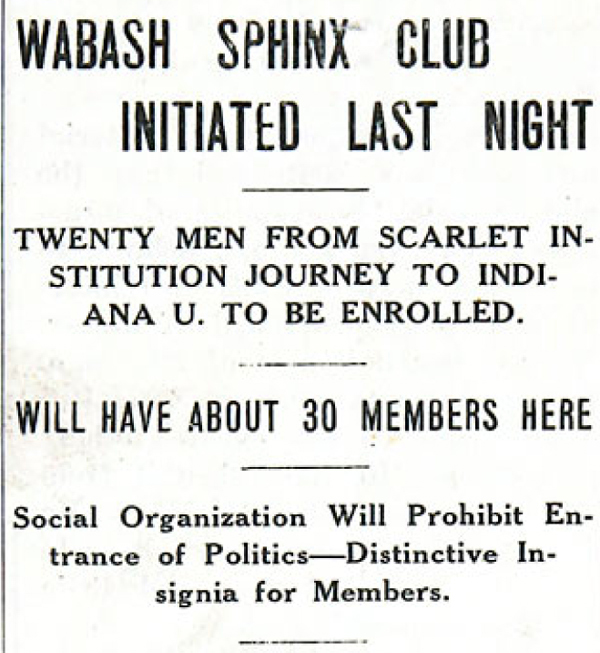 “Packed in a large motor ‘bus and filling a large Buick touring car, twenty men from Wabash traveled down to Bloomington yesterday afternoon, where they were initiated into the Sphinx Club. The party left here about two o’clock and arrived at Indiana at about eight-thirty. The entire Indiana club turned out to initiate the Wabash chapter. It was said by one of the initiates upon returning that the very best treatment was accorded  them by the Indiana men.

It is the plan of the club to add to its membership until thirty Wabash students are members of the Sphinx Club. The men are pledged and initiated twice each year.

The Sphinx Club insignia consists in the spring and fall, of black and white hats, and in the winter of black and white toques. The insignia of the Wabash chapter has not yet been secured, but it is thought that it will be ready for distribution among the members within.

It is probable that three dances will be given by the Sphinx Club each college year, one of which will come immediately after Christmas. As yet,  however, there has been no definite action taken by the Club in this regard. Meetings will held each Sunday afternoon and at the next meeting it is understood that definite plans for the Wabash club’s activities during the coming year will be outlined.

The men planned to leave Bloomington last night at about four o’clock, but due to an accident to the truck which necessitated it being delayed quite a while, a few of the men returned on the train, and others, in the Buick, had not yet arrived late this morning. The trip was without serious mishap, however, and proved popular with all of those making the journey.”

The following spring, the club held its first, on campus, initiation. From their start on campus the Sphinx Club has been a promoter of  campus unity and spirit.

Again from the student paper, The Bachelor of October 09, 1923, “At the last meeting of the organization held at the Sigma Chi house Friday evening, Dean (of the College, George) Kendall, who is an honorary member of the club, made a short speech to the members. Expressing an optimistic view regarding the future of the club, he stated that the organization could do much towards the promoting of friendly relations among the different campus groups, especially fraternities. The club will act as a receiving committee for the returning alumni at Homecoming, it was announced.”