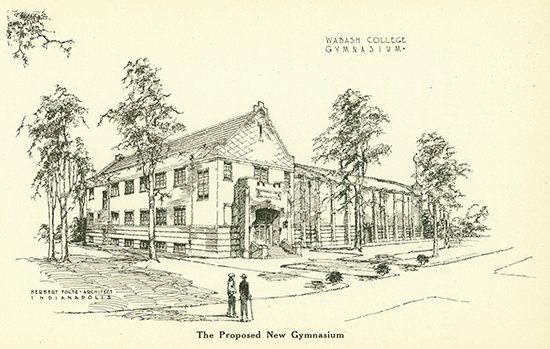 Architect’s drawing of the new gymnasium at Wabash. Note the two gentlemen in front. The man on the right bears a strong resemblance to our President Mackintosh.

This post is the story of the building we know as the Armory/Chadwick Court. The drawing above was the second and final proposal for the new gymnasium built as America entered the Great War in the late 19 teens. 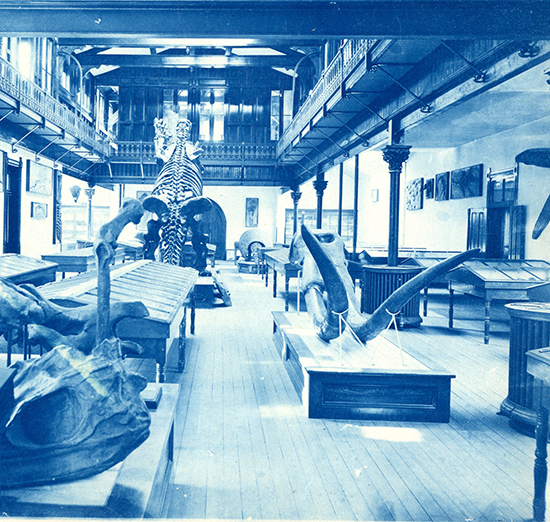 This picture is of the Polytechnic building which was built to house the military training and civil engineering programs of the 1870’s. As those programs were phased out, it became instead the Hovey Museum. The museum was later emptied of its biological treasures and used variously as storage, track training space, and for student organized events. One look at those menacing poles on the side shows the dangers in using this space for fast paced basketball games. The bottom line was that this building had outlived its usefulness and a newer, more multipurpose space was needed.

From the student magazine The Wabash of 1913 comes a listing of the items felt necessary in a new gym. The list of necessities begins with basketball, as the writer states,

Basketball is one of the leading sports at Wabash; but, at present, the college is not certain that it can be represented by a team this year, because it is not sure of a floor on which to practice. Of late years the team has been handicapped because if was not able to obtain a floor as often as was desired and several conference colleges have refused to send their teams here because Wabash does not have a court of regulation size.

The main floor of this new edifice should be large enough for at least two courts of the proper size…Underneath the main floor there should be room for a good sized swimming pool, locker space for a least five hundred men, and showers to accommodate, without delay, students who have been exercising.

There should be a baseball cage on dirt, track facilities for the runners, a place for pole vaulting, putting the shot, high and broad jumping, and the other events of the track….There is also need of wrestling, boxing and fencing rooms, bowling alleys, and a dressing room for visiting teams.

In addition to these items, it was noted that this building, “…would also provide a large and suitable hall in which the exercises of commencement and the alumni dinner could be held.”

The calls from the student body were not new, but they were gaining in number and supported by the alumni who, like the students, were not fond of “the old barn” as the Polytechnic gymnasium was known on campus. The movement grew and the decision was made to raise the funds to create this new building on campus. This small article from The Bachelor notes that this report is tentative, from a “semi-reliable source.”

This snippet from Wabash College the First 100 Years  fills out the report above.

“The decision to raise at least $75,000 to build a new gymnasium was made at the June meeting of the Board of Trustees in 1914. A committee of five was appointed to direct the campaign, the annual alumni banquet was wildly enthusiastic, and telegrams were received from the scattered alumni associations promising their support. All the signs were auspicious. But over in Europe late in that same month a Serb shot the Archduke Ferdinand; and a long delay in carrying through the gymnasium project at Wabash was one of the incidental results of his act.”

Next time we’ll learn more about the construction, the architect and why we have a building called the Armory. Until then,