The men of Wabash are leaving their mark on the world in so many ways. One of the best ways is when they work to improve their community. Many are the alums who volunteer, lead important initiatives or in other ways model their commitment to the Wabash motto which is to educate men to think critically, act responsibly, lead effectively, and live humanely. The subject of this piece lived his life in just this fashion. 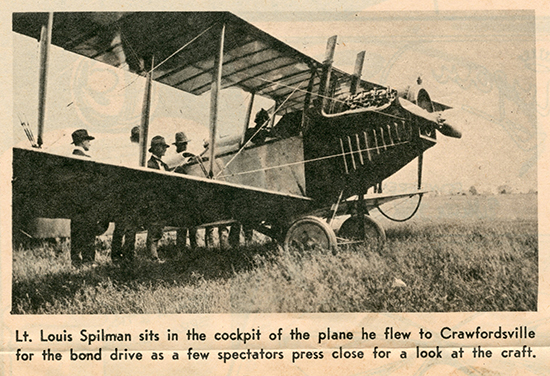 This is Spilman’s plane in a field south of town, photo from a piece in the Indianapolis Star of May 5, 1974, written by Spilman.

Louis Spilman entered Wabash in 1916 as a graduate of Crawfordsville High School. He left college when America entered the Great War, training as a pilot. Spilman trained in Indianapolis and at the age of 19 was commissioned a Second Lieutenant in the Army air forces. Having been certified to fly, he borrowed a plane from the base and in a stunt designed to heighten attendance at a local bond rally, Spilman flew into history. Planes of this era had no hi-tech navigational equipment, to fly directly to Crawfordsville, Spilman followed the Interurban rail tracks from Indy to town. It was this plane, piloted by Louis that was the first airplane to land in Crawfordsville. This was early in aviation and the plane and its pilot were a big deal at the time. 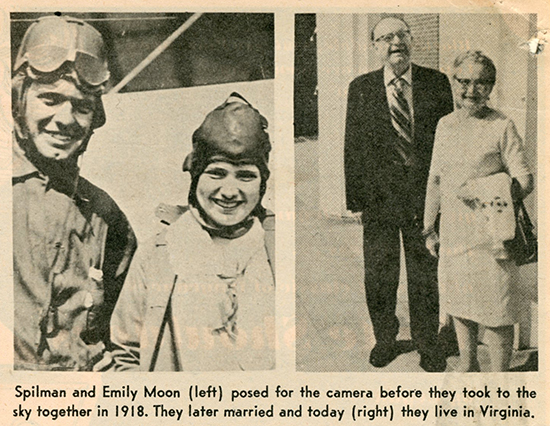 This photo from the same piece, as above, in the Indianapolis Star of May 5, 1974 and written by Spilman.

The stunt served its purpose well and created quite a show in the field south of town. Spilman reveled in the cheers, then offered to take those who were willing for a short ride in his plane. As we might suppose, not many wanted to fly, but among those who stepped right up was Emily Jane Moon of Crawfordsville. Here is a great photo of the two of them on that day. So young and full of joy.

It reads like a plot from an old B movie, but Louis and Emily were married and, true to their vows, it was until “death do us part.” They moved to Virginia where for several decades Spilman owned and ran a newspaper called the Waynesboro News-Virginian. His two sons are Wabash men and in his weekly column, Spillman often wrote about the Little Giants of Wabash. What is even more interesting, he named the local school team the Little Giants as well. Seems Louis was quite an influential fellow in his adopted hometown. He is described as “…influential in securing funding for the construction of Waynesboro High School…” So much so that the city school named its auditorium after him.

Yes, Louis Spilman gave back to his town, but he never forgot his Alma Mater. And while few might remember this jaunty fellow, the men of the Stagg Bowl team have a lasting token of his love for Old Wabash in the rings he made possible with his generous gift in 1978.  Wabash noted his accomplishments with an honorary degree in 1980. Here is the thing with this good man, he is one of thousands of good men Wabash has turned out over its history. Every day they get up, go to work, support their families, give back to their community and lend a hand where needed. They think critically, act responsibly, lead effectively, and live humanely. Or, as we like to say around here, they are SOME LITTLE GIANTS!