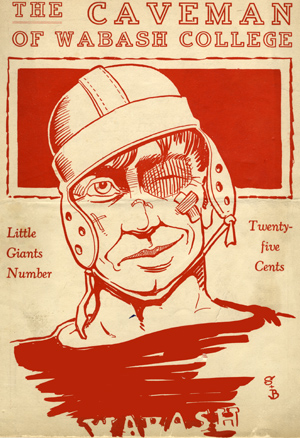 This was the cover for the “Little Giants” issue of the October 1924 Caveman. From this issue, “The football team has got under way, losing the first game to Purdue, defeating Monmouth by a one-sided score. At this writing Notre Dame is in the offing. The usual interest will be shown in the game of the Vaughan versus the Rockne, student versus teacher angle. Aside from this aspect, the game will be an important one.”

Pete Vaughan was a Crawfordsville High School graduate who played football at Notre Dame and was quite a star. On that team was a young Knute Rockne.  By 1924 Pete Vaughan was the football coach at Wabash and Rockne was coaching Notre Dame.

Best wishes of the season…

This is a photograph of the Barb Association ca 1914, the forerunner of the Lambda Chi Alpha fraternity. This photo was taken using a rotating camera which is why the curb, which is straight, appears to bend.  This was a popular type of photograph at the time and in our reading room we have a similar photo of the entire Wabash student body of 1912.

These gentlemen are posed in front of their handsome brick house with their sign proudly hanging from the front porch. This house has other long-term Wabash connections. Located on South Washington Street, just before the train tracks, some may know it as the longtime home of retired Athletic Director Max Servies [W1958]. Built by a Wabash man in the 1850s, it was also the home of our fourth Wabash President, George Stockton Burroughs, from 1892-1899.

Lastly, I would like to point out that just over the shoulders of the men on the far right we can just see the west end of the Big Four Station, essentially the arrival and departure gate for the College. The old station was torn down and a grocery store was built. Some may remember the old A&P store there, then it was a Crawford’s grocery store.

The house is still in excellent shape and continues to stand as a witness to more than 150 years of life in this small town.

I can tell it is approaching the end of the semester by the change in the students. They are just a little more determined as they walk across campus. They are filling the library and printing out the final copies of their papers. The discussions I hear as I come and go are mostly centered on a paper, a final or the day next week when they finish this semester. The faculty is anticipating the rush of grading and the guys are truly focused on their work. Indeed, the whole campus is holding its breath just a little. This is the time between the end of classes and the end of the semester. There is a sort of hush on the campus at this time. 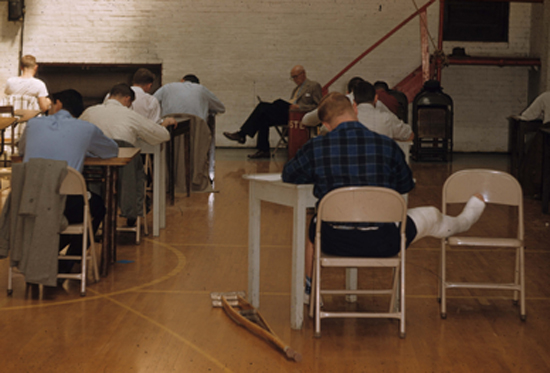 This great image is from the Brigance Collection. It is a picture of Dean George Kendall with his class in the spring of 1956. Dean Kendall sits at the front of the class and the students are clearly focused on their tests. I suppose there are blue books being filled and we can see that the setting is in the Armory.  Dr. Brigance was meticulous in documenting his work and his notes say that this is from May, 1956 and titled, “Ron Grimes and Dean Kendall.” 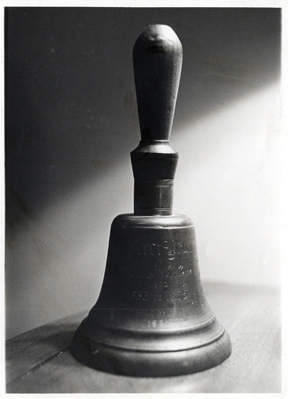 This December marks the 175th anniversary of teaching and learning at Wabash College. On December 3, 1833 the work of the College began when Caleb Mills rang a bell calling his 12 students to order.  The bell Caleb Mills used on that day and for many more years is still used today. One of the best parts of Freshman Saturday is the “Ringing In” ceremony when the President delivers his charge to the incoming class and they become Wabash men.  At Commencement, their last experience as students, the circle is completed when the President “rings out” the class as they become alumni.

Among the students present in Mills’ first class in 1833 was Samuel Steele Thomson, the youngest brother of two of our founders. This young man would serve Wabash for the rest of his life, as a teacher of Latin until 1885. Samuel Thomson was the first of a very long line of alumni faculty, a tradition that continues unbroken to this day. 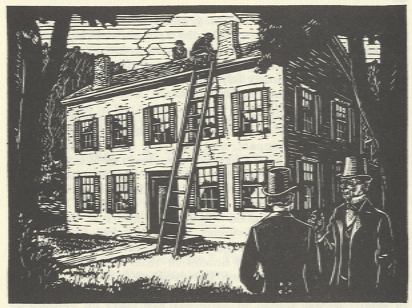 The humble frame structure where the first students and faculty gathered was Forest Hall and it was built on a heavily wooded bluff overlooking Sugar Creek. When the College moved to this location, Caleb Mills bought the old campus. He moved Forest Hall to his land near the new campus and later donated the building to the college. Forest Hall has served as a dormitory and was the home of the first Scarlet Inn, a sandwich shop for the students and faculty. Old Forest now serves as offices of the Teacher Education department, which seems to me to be a perfect use for the first home of the College and the place where it all started 175 years ago this month. 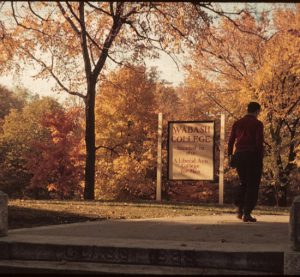 This is the first sign that stood on the corner of Grant and Wabash marking the College.  It was a Byron Trippet project in the 1930’s as an answer to the complaints of some of the Indianapolis alumni. The back story is that the Indy alums were complaining that the campus corner was shabby and not particularly welcoming. Trippet was given the task of “dressing it up” and this sign was his answer.

I love this sign as it tells who we are, what we do and how long we have been doing it. It is very simple and entirely straightforward. In the late 1950’s this sign was replaced with the more familiar wooden sign, which was later replaced with another, more substantial, wooden sign.

We now have a new sign on the corner and, while the reaction to it was mixed, to me the new sign is really rather similar to the first sign. Since Wabash was founded, things have been changing, like the campus location, the buildings and their uses and, of course, the curriculum.  In fact, I would say that the only thing that really stays the same at Old Wabash is that we are, as we always have been, a Liberal Arts College for Men…I guess the sign says it all. 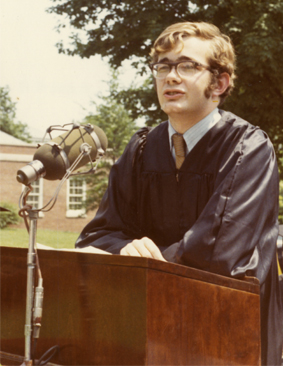 Bill Placher’s 1970 Commencement address lives on as one of the classic speeches delivered on campus.  The fact that it was a senior delivering it was even more incredible.  Each year when the commencement speech assignments are given to the seniors, as often as not one of the two will visit the Archives for a copy. Monday morning I pulled that speech and read it again, as I have so many times.  As I read his words nearly forty years later I still see the hope in them. I also see a challenge. “…But these are challenging times, and even ordinary men sometimes respond to challenges. In the years ahead, in the army, on the campus, in the corporation, many of us may, for reasons we will never quite understand, act more bravely or speak out more honestly, than we had quite intended. We may do some good, and know it will never be enough, but hope to improve a little by living.

Bill ended his speech on that day with the following: “I said I would offer no easy answers, and I trust I’ve kept that promise… perhaps we’ll learn that there are more things to admire in men than to despise; perhaps, knowing it will never be enough to change the world, we will act more honorably than we expected we would; perhaps we’ll have a lot of fun along the way. It wouldn’t be a bad life.”

Indeed, his was a good life, well lived.

A phrase that I often hear is, “Back in the day…” which when used by students might mean 20 years ago or 150 years ago. It is a handy phrase which in this posting means 95 years ago…So, back in the day each class would get together and decide on a common piece of apparel that all members of the class would purchase and wear on campus. Sometimes this would be a hat, sometimes a specific pair of pants. In this instance, we see the juniors who will become the class of 1913 in their newly acquired garb.

This picture shows all of the men of ’13 in their stunning wool coats. From this shot we have no sense of the colorful presence they made while walking across campus. Luckily for us interested folks of the future, one member of the class felt compelled to capture this colorful display.

The Wabash Magazine was a monthly publication of the student body. Each fall they would publish a “Football Number” and as the last issue of the year a “Senior Number”. The March issue was the “Junior Number” and here is the cover created for the year of 1912. This cover tells us that these vibrant coats were scarlet and black. Indeed they were quite a feast for the eyes and served to mark a “’13 man” anywhere in town. 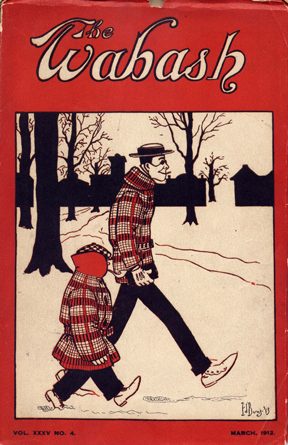