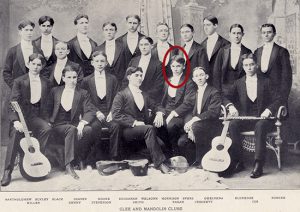 Carroll Ragan [W1901] is a name still familiar to some on campus – which is just as it should be…Ragan, along with Ted Robinson, wrote “Dear Old Wabash”, our fight song. Ragan was the music man and Robinson gave us the words that all freshmen are supposed to know by Homecoming. There are those who could tell you that Ragan also wrote the Alma Mater. The picture above is from the Viewbook of 1898. Ragan is on the front row, 3rd from the right, in this photograph of the Mandolin and Glee Club.  Ragan left Wabash prior to finishing his degree which was a decision that he later regretted. But he always kept dear old Wabash close to his heart.

From information in the historic New York Times, we learn that his musical career did not end with his stay at Wabash. When WWI came along Ragan composed the “Wabash War Song.”  In the early 1920’s he was writing both words and music for musical comedies.  An article from April of 1925 reported on the performance of the Wall Street Follies, an amateur theatrical troupe, of a piece called “Done in Oil.” Ragan wrote both the book and the music. The play was very well received before a hospital benefit crowd of 2,000 in the Waldorf Astoria Ballroom.

The next year’s activities are described by Ragan in a letter to his nephew, Carroll Eben Black. Writing to his namesake, who was a student at Wabash in January of 1926, Ragan said, “I am very busy now getting ready for the Wall Street Follies. I have written a good deal of the music and lyrics but am not doing any coaching this year. We play at the Manhattan Opera House January 29 and will possibly take the show to Philadelphia later.”

Carroll Ragan was a creative young man – surely an advantage in his “day job” as an advertising executive. Following his employment in Illinois as the editor of a small town newspaper, Ragan headed to New York City. He secured a job as publicity man for the American Real Estate Corporation. In 1916 he moved to the United States Mortgage and Trust Company where he was publicity manager. A successful ad executive, Ragan often used his musical talents for the benefit of his clients.

One of the really nice aspects of this story is the connection to Wabash over the generations of the Ragan family. Carroll Ragan’s father was a Wabash man [Dr. Gillum Taylor Ragan W1860], as was his nephew Carroll Black [W1928] as was his great-nephew Carroll Ragan Black [W1966]. In fact until just last year Cal was a member of our Advancement team. For a great article about Cal and his family see http://www.wabash.edu/magazine/index.cfm?news_id=5318

So many families have this sort of connection with this place. There are many legacies in our history and there are even a few families whose connection stretches back to the very first class. New legacies are created every year as well. Each year, at commencement, Public Affairs takes photos of the legacies in the graduating class. To see the photos from the Class of 2009 click here http://www.wabash.edu/photo_album/home.cfm?photo_album_id=2003

It is a wonderful thing to see the traditions passed from father to son, down through the decades. Creating generation after generation of loyal sons for Dear Old Wabash, as the song suggests and just as Carroll Ragan was in his time, is worthy work that continues yet today.