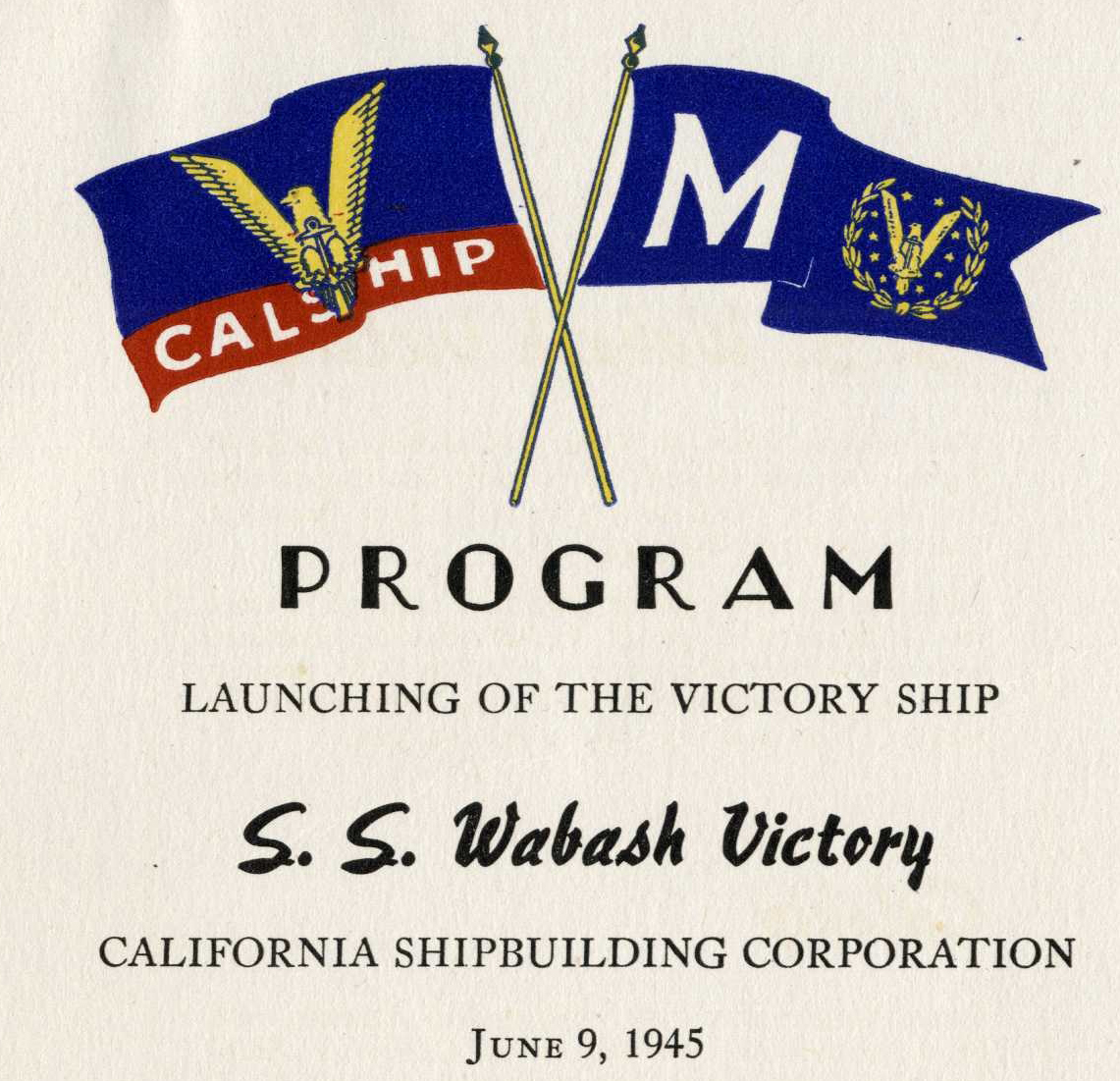 Yes, it is called the S.S. Wabash Victory and it is named after the college and NOT for the Wabash River. The Victory was a new ship design, intended as an improvement on the Liberty class of ship. It was described as, “a faster vessel, with finer hull lines and…twice the horsepower of the reciprocating steam engine used in the Liberty.”

Information from the United States Maritime Commission, which oversaw the Merchant Marines,  tells us more about the Victory ships. There were, as of February 10, 1945, 668 Victory ships under contract and mass production began in 1943.  These ships were used for combat and for the delivery of all the material needed to wage a war. There were Victory ships outfitted with refrigeration and some were hospital ships. As an example of their size, each Victory ship could carry 440 tanks or 2,840 jeeps.  These ships were among the workhorses of WWII.

The names of the ships were varied, the first group of Victory ships were named for the nations united as allies in WWII. Another in a series of names was that of colleges or universities in America.  A former alum wrote to President Sparks suggesting that if the College were to contact the Maritime Commission, it might be possible to have a ship named for Wabash.

In March of 1945 President Sparks sent a letter to the United States Maritime Commission requesting that Wabash College be considered as a possibility for the name of one of the new Victory ships. He very quickly received a response that only schools with enrollments over 500 were being considered. Sparks sent a letter to the Wabash alum with this information adding, “This pretty well eliminates Wabash College for the present…”

Seventeen days later President Sparks received a letter with this news, “It is a pleasure to advise you that the Maritime Commission is naming one of the new Victory ships in honor of Wabash College….The S.S. Wabash Victory is under construction by the California Shipbuilding Corporation…and will be ready for launching on or about June 6, 1945.” 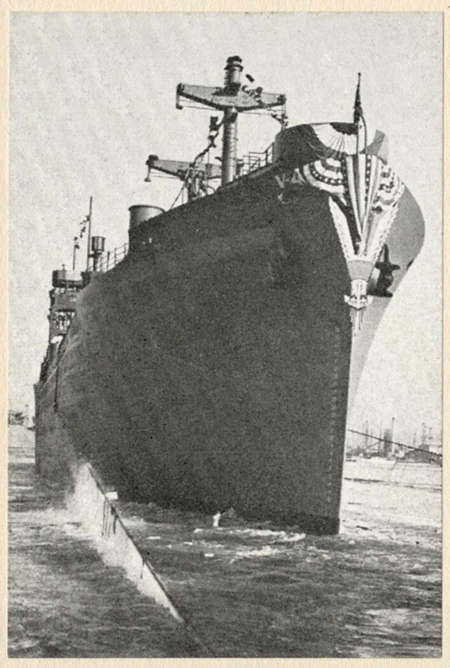 An alumnus from California attended the launch, on behalf of the College and it all went just as planned. This is pretty much all that our files show on this  neat story. But in the age of the internet, we can learn a whole lot more about the S.S. Wabash Victory and its war work. I found my way to Wikipedia and then to this site: http://www.history.navy.mil/danfs/ which is the the Dictionary of American Naval Fighting ships and the story just got even better….

The S.S. Wabash Victory served as a transport in the Pacific through 1945. In early spring of 1946 she was sent to Europe to help with transporting troops and materials back from Europe. By the fall of 1947 the ship had been transferred to the U.S. Army and was renamed the USAT Private Francis X. McGraw. The search for information on Private McGraw led me to this site: http://www.dvrbs.com/ccwd-ww2/CamdenWW2-FrancisXMcGraw.htm.

If there is a better example of our school motto, “Wabash Always Fights” than this humble private, I can’t imagine what it might be as the text of his Congressional Medal of Honor citation shows, “General Order No. 92. October 25th, 1945. Congressional Medal of Honor Citation: He [Private McGraw] manned a heavy machinegun emplaced in a foxhole near Schevenhutte, Germany, on 19 November 1944, when the enemy launched a fierce counterattack. Braving an intense hour-long preparatory barrage, he maintained his stand and poured deadly accurate fire into the advancing foot troops until they faltered and came to a halt. The hostile forces brought up a machinegun in an effort to dislodge him but were frustrated when he lifted his gun to an exposed but advantageous position atop a log, courageously stood up in his foxhole and knocked out the enemy weapon. A rocket blasted his gun from position, but he retrieved it and continued firing. He silenced a second machinegun and then made repeated trips over fire-swept terrain to replenish his ammunition supply. Wounded painfully in this dangerous task, he disregarded his injury and hurried back to his post, where his weapon was showered with mud when another rocket barely missed him. In the midst of the battle, with enemy troops taking advantage of his predicament to press forward, he calmly cleaned his gun, put it back into action and drove off the attackers. He continued to fire until his ammunition was expended, when, with a fierce desire to close with the enemy, he picked up a carbine, killed 1 enemy soldier, wounded another and engaged in a desperate firefight with a third until he was mortally wounded by a burst from a machine pistol. The extraordinary heroism and intrepidity displayed by Pvt. McGraw inspired his comrades to great efforts and was a major factor in repulsing the enemy attack.”

To finish the story of this ship, the SS Wabash/PFC McGraw was again transferred and renamed the T-AK-241 and continued in service with the Navy until she was decomissioned and scrapped in 1974.

As with so many of the stories from the Archives here at Wabash, this was a straightforward story which became something more, something richer – a story with some real heart!

The soccer team at Wabash is strong and well established and the fans are loyal and excited for this season. I thought this might be a good time to take a look back at the beginnings of this sport at Wabash. 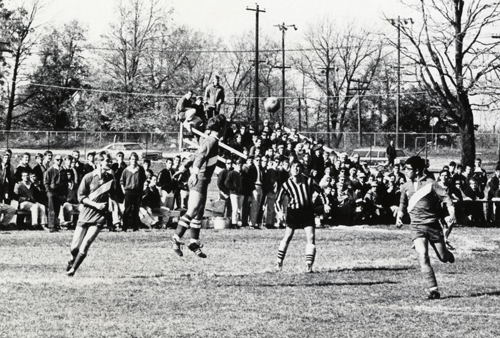 The photo above was taken in the late 1960’s, although I don’t have a specific date. The Wabash Soccer Club was formed in 1965 with John Fischer as the driving force. He gathered a team,  lobbied the administration and, with help from John Ledyard, had taught many players the game (there were no mini soccer leagues for kids then). The students were new to this sport, but it was embraced and in 1966 the club had a full season.

It was decided that for the 67 season, soccer would become a varsity sport and a head coach, Phil Daly was hired.  With Fischer as assistant coach, soccer was up and running.

Here are a few pictures of the early days of soccer at Wabash…Enjoy! 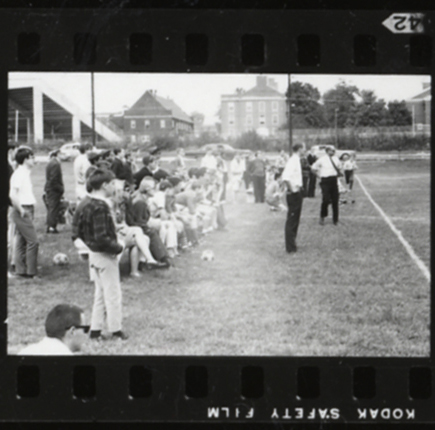 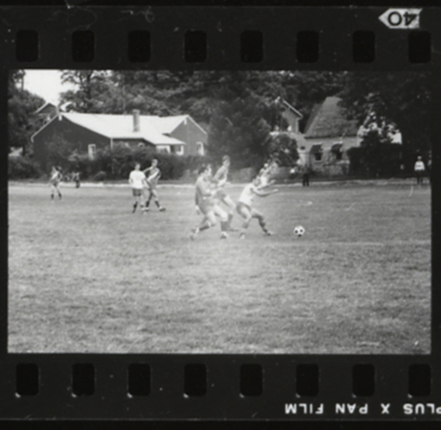 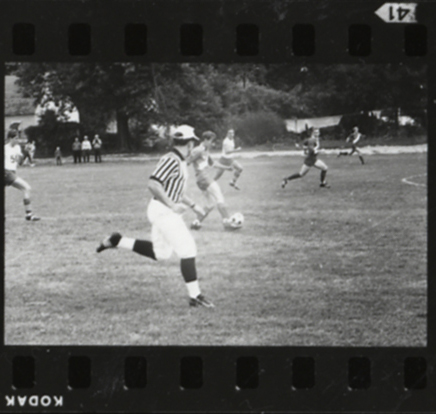