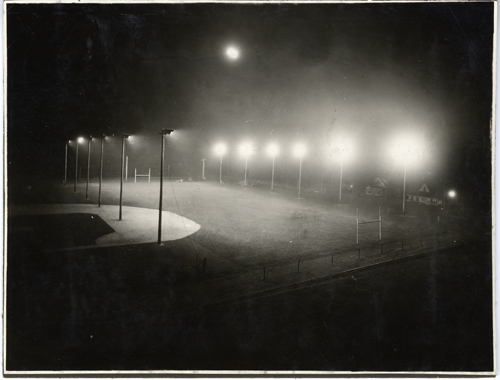 “In 1929, Director (Harry) Scholler determined to light the field for night football, an experiment that had worked well in the states west of Indiana. So far as the lighting was concerned the experiment was successful. And for the first game or two to be played at night the crowds attracted by the novelty were satisfactorily large. But as the season went on and the weather grew colder, it came to be rather a trial to all but the most eager lovers of football to stay out in the damp cold of an autumn night – particularly as the Wabash team lost a number of these encounters. Cheerfulness returned at the end of a bad season when Clayton Weist, the backfield star of this era, made the touchdown that won by 8 to 6 the game with DePauw, played in Crawfordsville and in the afternoon.”

At this time the Wabash College football field ran parallel with the railroad tracks. The lights were used for night football the next season as well. The college’s history says it was even more depressing than 1929 as the team regularly lost by one point. 1930 was the end of night football. One string of the lights was left to help light a late practice.

The teams of this era often struggled to win. It was a time of big change in athletics, in all of Wabash, really. Following President Hopkins’ arrival, sports took a back seat to academics. There were new admission requirements and academic expectations of all athletes.  It was a trying time in our sports history and led to alumni dissatisfaction with President Hopkins. But if time is the truest test of an idea, then President Hopkins wins big. The student athlete, with the emphasis on student, is the model of Wabash athletics today.