East semester I put up a small exhibit in the Lilly Library…this semester the exhibit is about Wabash in 1911. As a part of looking at college life in 1911 I was reminded of the hustling bustling downtown that was Crawfordsville in that era. Included in that hustle was the Interurban electric train system and here are a few images of that system in our town… 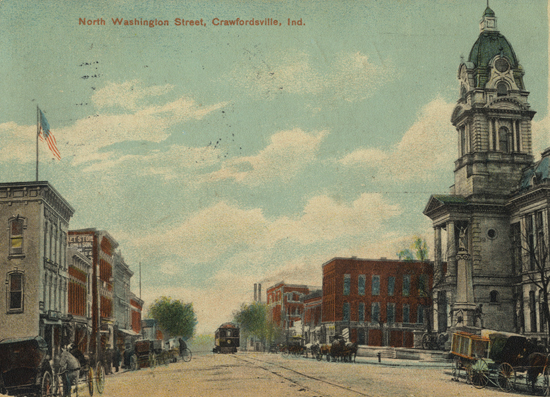 From the center of Main and Washington Street looking north

In this picture we see a bustling downtown full of people about their business. The courthouse on the right of the photo still has its tower, what a beauty! In the back of the picture we see the smokestacks of the electric power plant and in the middle we see the tracks and a car of the interurban system. Cheap, reliable power was the bedrock on which the Interurban was built. 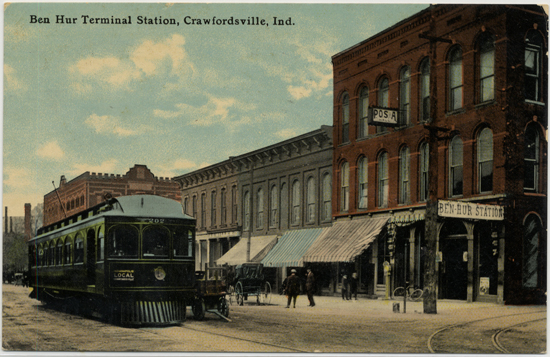 This great image is of the Ben Hur terminal in downtown Crawfordsville. The interurban was a rail line connecting Crawfordsville to Indianapolis. The station building was torn down just a few years ago, but was located just north of the courthouse where there is now a parking lot.

The Interurban was a system of trains that connected towns like Crawfordsville to Indianapolis. As you can see from the advertisement below, there was hourly service.

Ad from Wabash Magazine of 1911

The Interurban system had a huge impact on life at Wabash College. With reliable and affordable transportation to Indianapolis, many large college events could be held in Indianapolis. Chief among the events were football matches with larger schools. Typically there would be a parade through the downtown followed by the big game with opponents like Butler, Michigan Agricultural College (now Michigan State), Indiana University and Notre Dame…even the Wabash – DePauw game was sometimes played in Indianapolis.

If you are interested in learning more about the Interurban here is a link to a collection at the Indiana Historical Society, the historical notes are fascinating:

Also this page has some great photos:

As discussion of light rail in Central Indiana increases, it is fascinating to me that one hundred years ago, we had a highly efficient, highly functional system in place…I would love to hop on a train and head to downtown Indianapolis for dinner and maybe a show and then relax on the way home by train….

The interconnectedness of the world today is just stunning and here is a great example of the ways that technology improves our knowledge. This morning Jim Amidon in the Public Affairs office forwarded to me an e-mail from his counterpart at DePauw, Ken Owen.  The e-mail was from the grandson of an alum, Irvin “Tiny Knee” [W1923] who was a football and track star while a student here. It seems that the grandson was searching the web and landed on the DePauw site where the digital media project “Monon Memories” resides. It is an amazing project with many images from Wabash sources. and Tiny’s grandson was just tickled to see the entries for the early 20’s. A copy of this exchange landed in my in-box this morning and prompted this posting.

Tiny Knee is a name I know well…he was quite a star of the football team and really, who could forget such a name? I thought I might share a bit on this fascinating fellow who was, as we at Wabash like to say, “Some Little Giant!” From the college history, Wabash College The First Hundred Years we have this delightful passage:

“But most thrilling of all were the games with Purdue. Each year, almost always, as it happened, on a remarkably fine day in October, the team would go up to Lafayette to play, followed or preceded by all their fellow students and by many citizens of Crawfordsville. Several college Fords would be certain to break down on the way; but their occupants would be piled into other cars. All would arrive at old Stuart Field, noisily and hopefully. The Purdue band would march on with its vast bass drum, followed by the Purdue seniors in beribboned derby hats, intended to be thrown in air at the first touchdown – an intention that could not always in a Wabash game result in any hat-throwing. And the Wabash “Sea Goin” band would be there, in white trousers and red sweaters, making a noise and an appearance out of all proportion to its size. And then the game. And after the game a slow and almost always a happy progress down to the bridge over the river, and across it, and home to a welcoming Crawfordsville.

“Not one of these games failed to make heroic in Wabash hearts and minds one, or two, or six, or all eleven of sixteen or twenty, of the Wabash team engaged in it. To write a book on Wabash and not recount the deeds of these men seems sacrilege. But the memory of them is still fresh: the time has not yet come to consign them to the archives.”

And so with the men who played in all these games – and against the Michigan Aggies, and Franklin and Hanover and Millikan, and Marquette, and many another worthy rival unmentioned above. It was only yesterday that “Tiny” Knee was plunging through the line for Wabash, and Kessler and Aul and Milstead stopping enemy plays in their tracks, and Stasand and “Forky” Elliot picking forward passes out the air, and Singleton and Roll…”

Irvin Knee was born and raised in Wabash, Indiana so I guess one might say it was his destiny to attend here. A gifted athlete, Tiny played fullback on the football team and was a speedster taking top state honors in both the 100 and 200 yard dash events while in high school.

More than just a great athlete, Tiny was also a great man. For forty years he coached in Ripley, Tennessee and is described in a half page happy birthday ad placed in the Ripley paper by a the local bank  in 1968 as, “Outstanding coach in football and basketball and a prime mover in the development of track and field sports in West Tennessee. Planner and builder of one the state’s most beautiful sports arenas, named after him, Irvin Knee Field, and one of this area’s outstanding recreational complexes, known after him, as Tiny Town.”

Here is a link to a picture of the stadium, read down to the comments section for a lovely posting on Tiny. http://www.memphisflyer.com/AskVanceBlog/archives/2009/11/06/ripleys-tiny-knee-stadium