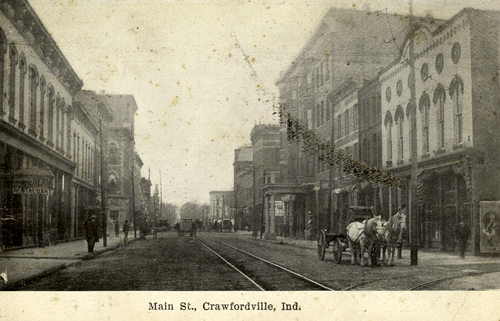 This image is from an old postcard in our collection from the early 1900’s. The image was taken from the middle of Main Street, looking west. Crawfordsville was a vibrant town and the downtown was where nearly everything happened. The streets were lined with little shops, bakeries, stores and restaurants.The Post Office is just behind the photographer in this image. As you might imagine, the Post Office was truly a place to “see and be seen.”

The rails that run down the middle of the street belong to the Interurban which took passengers to and from Indianapolis several times a day. The very large building on the right is the Crawford Hotel which was torn down in the 1970’s. The Crawford was a luxury hotel where most of the guests of the College stayed while in town. It was also the site of many alumni banquets. That space is now a small park with a fountain.

When this picture was taken, the fraternities still had rooms in the upper floors of the downtown buildings and had yet to become residential. The downtown halls were primarily a social venue and the scene of many regular dances.

The building on the left near the camera is still of very great interest to our students today as that is the home of Little Mexico. A regular venue for faculty, staff and students, stop in any evening and you are likely to see several members of the Wabash family.