This is a photo that I love to share whenever I can. This is the “Senior Bench”  as it is known on campus. It is really the Thomson Bench, a memorial to several members of the Thomson family who played major roles in the early history of Wabash.The Thomson Bench was dedicated in 1905 and almost immediately became the exclusive property of the Senior Class. It was a custom that, in a rather serious presentation, the Bench was transferred to the rising seniors at Class Day each year.

The three young men above are enjoying a sunny day on the east campus. This picture, like so many others here in the Archives, had no date or names associated with it. However, the magazine that the two men on the right are reading is so distinctive that I can say with certainty that this picture is from sometime after November 1916. That issue of the Wabash Magazine is the only one to carry such a cover. 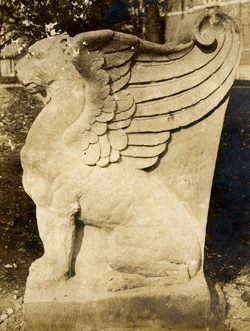 This is a close-up of the end of the bench. I like both of these images because they show us what the Bench looked like before it was customary to paint it. That custom is now firmly established and the Bench is painted several times each year. It is not uncommon for the Bench to serve as a memorial to a lost member of the Wabash community. It was most recently painted for the passing of Bill Placher.

There are other times when the bench is painted, simply as an expression of something happening on campus. We have a great photo of the Bench decked out as a loaf of Wonder Bread, painted to note Elmore Day (a phenomenon worthy of its own posting) and this version, which reads, “Physics Comps Essay: Explain briefly, but in depth, God’s contribution to the creation of the Universe.” 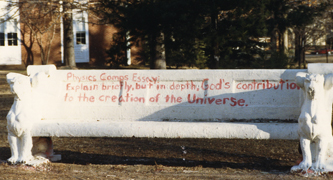 A rather witty nod to a much dreaded, but unavoidable, rite of passage for all Wabash men, Senior Comprehensive Examinations.

The Senior Bench has been a witness and a participant in 104 years of student life. It is a lightning rod for student interaction and it is a blank canvas awaiting the next message…delivered in paint.