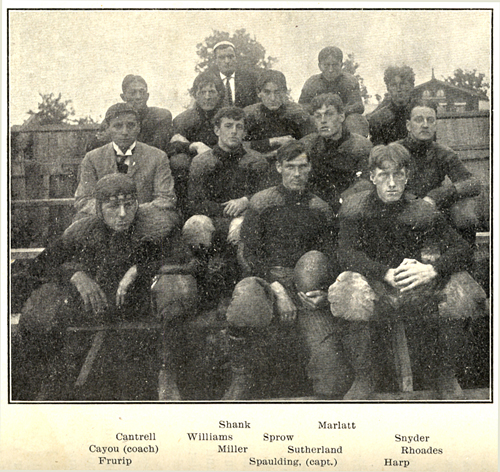 This Varsity football team of 1904 was the first to be known as the Little Giants and the first to be coached by Francis Cayou, pictured second row, far left. This team played and beat Hanover 81-0, Butler 51-0 and Earlham 35-0. They also lost by close scores against much the larger teams of Purdue, Illinois, Notre Dame and Michigan Agricultural College (now Michigan State). It was due to their determination that Coach Cayou told them that they played like “little giants”. Overheard by a newspaper reported and reprinted, this tag stuck and so all of our sports teams have been known since that time.

The second African American football player for Wabash is pictured in the top row, far left. Walter M. “Bill” Cantrell started in the position of right tackle and was from Danville, Illinois. The first African American football player was Samuel S. Gordon who belonged to the team of 1903.  Both teams faced discrimination and some schools threatened to cancel if either man played. President Kane was firm, these men would be allowed to play or the games would be cancelled. Both men did play with their teams and some games were cancelled. Wabash Always Fights, but that is another post for another day.

Lastly, I would also like to highlight William Spaulding, the team captain pictured in the front row holding the ball. Spaulding became a coach at Western Michigan from 1907-1921. He left Michigan for  Minnesota from 1922-24. The last 13 years of his coaching career were spent at UCLA from 1925-38. For the next ten years he served as UCLA’s athletic director.