From Wabash to Westwood – a story of football glory 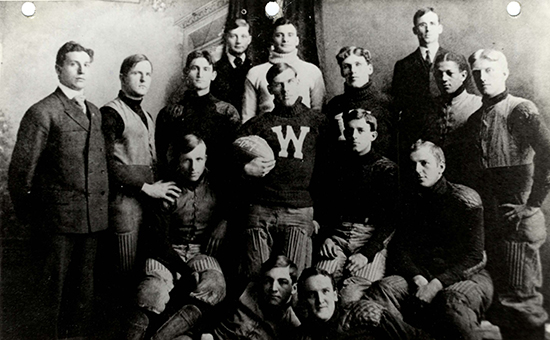 At center holding the football is Bill Spaulding, Wabash class of 1907 and captain of the team. Coach Francis M. Cayou is at the far left of the picture, in the dark suit.

The teams of Francis Cayou were the first to be called Little Giants. These players worked hard and, although they didn’t always win, they always played tough. It was for this grit and determination that Cayou first told them that they played like little giants. This name was picked up by a sportswriter and it stuck. The captain of that first Little Giant football team was William Spaulding the handsome fellow at the center of the photograph above, shown holding the football.

Spaulding was a talented athlete from Melrose, Wisconsin as shown above in the 1904 photo. This image appeared in the November, 1904 issue of the Wabash Magazine highlighting Spaulding’s  selection as a member of All-Indiana football team. To get a better sense of his contribution to the team, here is a bit of information from the Wabash Magazine of 1906 describing Spaulding, “One of the best backs in the business. Is a strong offensive player, and the way he plunges the line is a revelation to the scarlet followers. He is also strong on defensive, and plays Cayou’s secondary defense to perfection. Bill is playing his third year on the team. He is one of our best ground gainers. Always plays hard and plays to win. Possesses an unlimited amount of grit and nerve, and a thorough knowledge of the game. He has the honor of leading the best team Wabash has had since the palmy days of ’95. Bill was picked for one of the all-Indiana backs last year. He is 25 years old, weighs 185 pounds, and is 5 feet 11 inches tall.”

A year later, in 1907, this was the write-up, “‘Bill’ spent his freshman year at Lawrence University. One of the ‘Little Giant’ foot ball men and captain of the team for two years. He was picked for one of the all-Indiana backs, and was also honored with a place on the all-Western team. ‘Bill’ also received a ‘W’ for sprinting on the track…”

It was not long before Bill was back in football as he soon took the job of head coach of the Western Michigan Teacher’s College in Kalamazoo, later known as Western Michigan University. He coached at Kalamazoo for 15 years before taking the head position at the University of Minnesota. It was there that he gained national prominence when his Golden Gophers beat the powerful Illinois team by shutting down their star player, Red Grange. In 1925 Bill left Minnesota to accept the head coaching position at the Southern Branch of the University of California. Their football team was fairly miserable when Bill came to coach. But just as Knute Rockne knew, when he recommended Bill for the position in Los Angeles, Spaulding was just the man to turn it around. And he did.

Folks who know their California football history might know that the Southern Branch of the University of California became UCLA. It was his teams that put UCLA football on the national stage against such great teams as Stanford and USC. Spaulding coached at UCLA from 1925 until 1938 and was a winning coach. In the book Stadium Stories: UCLA Bruins by Chris Roberts we get a sense of the man as coach, “Spaulding had a pretty laid-back style. There were never any fiery speeches before the games or at halftimes. He didn’t yell at players, and spoke in a soft, but forceful voice. Even during bad times he tried to keep a sense of humor. And when his team suffered a defeat, he would encourage, not berate, his players.” He was such an asset to the school that when he left the coaching position he became UCLA’s Athletic Director. 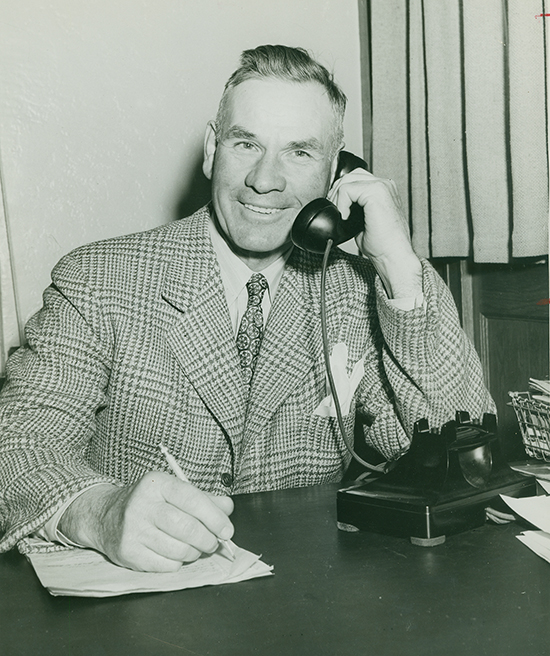 Bill Spaulding, shown here at his desk in Westwood, was a man that all admired and in 1941 Wabash awarded him an honorary degree. Here is the citation from the Wabash Bulletin of October, 1941, “William Henry Spaulding, of the class of 1907, you have carried the best of the athletic tradition of Wabash with you through a distinguished career as coach and director of athletics. As a young man at the Kalamazoo State Teachers College, later at the University of Minnesota, and since 1925 at the University of California in Los Angeles, you have made formidable teams and sportsmanlike men. No one in the West enjoys prestige like yours for handling, in the best interests of the students themselves, the complicated situations of contemporary intercollegiate athletics. For your enlightened understanding and humane leadership of sports in education, it is my privilege to confer upon you, by the authority of the Board of Trustees, the honorary degree of Master of Arts.”

So well beloved was Bill at UCLA that he was in the first class inducted into their athletic hall of fame. To get a sense of the honor a partial list of the others inducted in 1984 reads like a who’s who of American sports. Here is a link to that list:

And for a more lasting memorial, the football field on the Westwood campus is Spaulding Field, named for our man. Used today as a practice field, Spaulding is an integral part of UCLA student life.

One last note about this most amazing fellow, in my research I popped up information on iMDB – the internet movie database – that lists Bill as appearing in the film Knute Rockne All American which also starred Ronald Reagan as the Gipper and the film The Jackie Robinson Story, both times as himself.  Quite a career and quite a life!

I should add that Spaulding is in the Wabash Hall of Fame as well. All credit for this story goes to Max Servies and, as Max might say, Spaulding is SOME Little Giant! Indeed, one of the ORIGINALS! To read more about this team, click here: