Peeking Into the Past

This photograph is of downtown Crawfordsville, Indiana looking east toward the Montgomery County Courthouse. In this photo at top left, we can see the Courthouse tower and its beautiful clock, just recently restored.

Also note the tracks down the middle of the street, those are for the electric Interurban trains that ran regularly through town and on to downtown Indianapolis. An old fashioned light rail service, affordable AND convenient. In fact, many of Wabash’s football games were played in larger venues in Indy. The Ben Hur Line would add extra cars for the big games and our students and fans hopped on board. The electric power lines for the trains are clearly visible in this photograph.

The building on the right, with the round tower, is the first YMCA. Basketball fanatics might know it as the cradle of basketball in Indiana. It was here that a young man, trained under Naismith brought the game to West Central Indiana. The YMCA court served as the home of Wabash basketball for many years due to the unsuitability of our gymnasium.

Here is a picture of the “Old Barn” on campus.

Note the posts running down either side, completely unsuitable for the fast paced game of basketball. So it was that our teams played at the “Y” until the College built their own modern gym, late in the 19 teens. Here is a picture of the YMCA gym at the birth of basketball in Indiana. 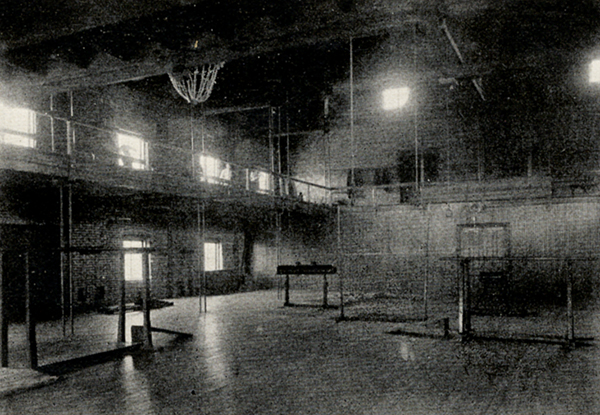 As many of us succumb to the madness of March, it is fun to peek into the past and see the roots of our mania!