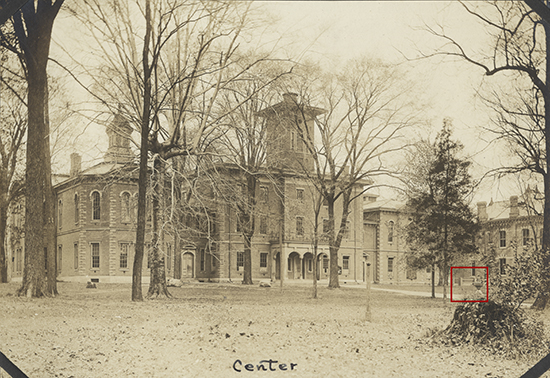 This post features several photographs from the John Parrett Collett scrapbook which he created while a student at Wabash in the early 1920s. Collett, class of 1924, attended Wabash during the roaring 20s and his scrapbook gives us a good bit of insight on his time here at Wabash. Collett came from a long line of Wabash men and pledged the Phi Gamma Delta fraternity. In his scrapbook he carefully pasted in Bachelor articles regarding sporting events, dance cards and more. Luckily for us, this scrapbook also includes photographs of campus at that time.

For this picture of old Center Hall above, I have highlighted a couple of features no longer in place. The first is in the foreground of the red box and is the college drinking fountain – now an obscure planter west of the Chapel. The second item, no longer there, is the Junior Fence. This fence was erected not long after the senior bench was dedicated. The fence was removed for the construction of Waugh Hall following the second world war.

Above is another picture which includes Center Hall. This one I love for the fellows ambling along to class, perhaps in Peck Hall or perhaps they are off to Yandes Library for a bit of studying. 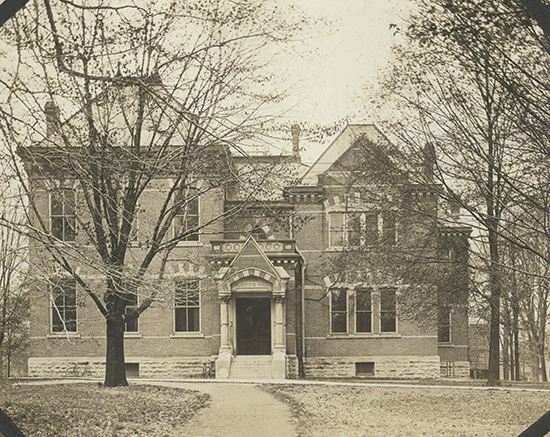 This is Peck Hall, named for its donor. In this building pictured above generations of Wabash men learned chemistry and physics. It was taken down to build Waugh Hall, which is now the site of Hays Hall of the Sciences. Hays Hall replaced Waugh Hall as the home of Biology and Chemistry. It was named Hays in honor of Thomas Alvin Hays [W1955]. Hays, a member of the Board of Trustees since 1985, spearheaded the Campaign for Leadership which provided the funds to erect this building. 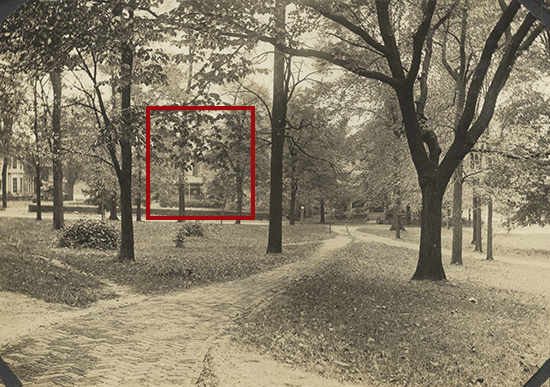 This photo was taken in the Arboretum [east part of campus] looking out toward Wabash Avenue. To get a feel for the location, the red square encloses the Herron House, a brick landmark with a tower, just across from campus. Just to the left is the future site of Trippet Hall.

This might be my favorite picture of the bunch! It is of the Grant/Wabash corner. I especially like the brick of Grant Street.

Lastly, there is this picture of the Class of 1924 taken during their freshman year. Collett is highlighted right in the middle of the group. John P. Collett loved Wabash College. As a student he was heavily involved on campus including as Editor in Chief of the 1924 yearbook, President of the Wabash Pan-Hellenic Council, Bachelor staffer, very active with debating, a member of the Wabash Players – a theater club and forerunner of the Scarlet Masque, a member of the Student Council and President of the Law Club among may other activities. Beginning in 1939, Collett served Wabash as a member of the Board of Trustees. From 1965-1975 he was President of the Board. For several decades, John Parrett Collett served Wabash well, with this donation of his student scrapbook, his family adds to his contributions by giving us a look at student life for the “Hell-Roaring 500” as the student body of that time came to be known. A real treasure for the Archives, and one we are delighted to share!

From WABASH to Westwood…
A life of service – Some Little Giant!