Homecoming – a time to reflect

Homecoming has such a nice ring to it. It is a coming home, it is a return to a place of connection, it also offers a reason to reflect. Homecoming at Wabash College is this and more, it is a chance to celebrate with those who were here and have left. As alums and their families return, the stories they tell of their time at Wabash gives our current students a look into the past at a very different Wabash. A Wabash where Chapel attendance was mandatory, where Saturday classes loomed over Friday night fun. A simpler place where, as our friend Dick Ristine used to say, “They mowed the grass twice a summer, whether it needed it or not.” It was a different Wabash and a different time, let’s have a look at some homecoming celebrations of the past.

This 1912 article was the first call for a proper homecoming celebration. The idea was to personally invite all the former “W” men back to campus for the football game and a banquet. The “W” men were simply what we would today call lettermen, or those athletes who had earned a letter in a sport.

A big feature of homecoming in the early 20th century was the homecoming parade. College parades were a treat for both the students and the town, which was probably a good thing as by the time homecoming was over, there would have been some in town who were less than pleased with the students. Take a look at this next picture to see why this might have been the case.

Each year the freshmen would wander out into the town and gather any old thing they could find that might burn. All of these bits and pieces were stacked high for a bonfire on Friday night before the game. Here are a few more spectacular bonfire pictures. 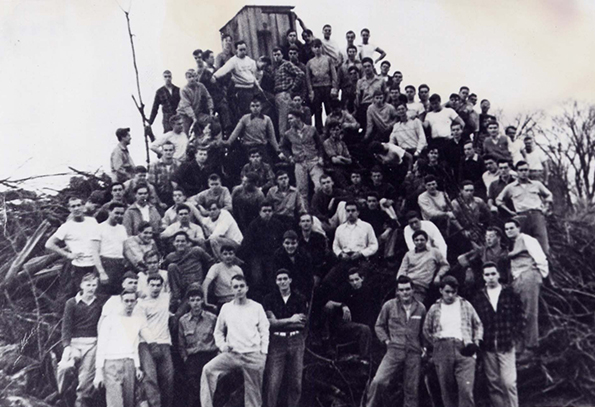 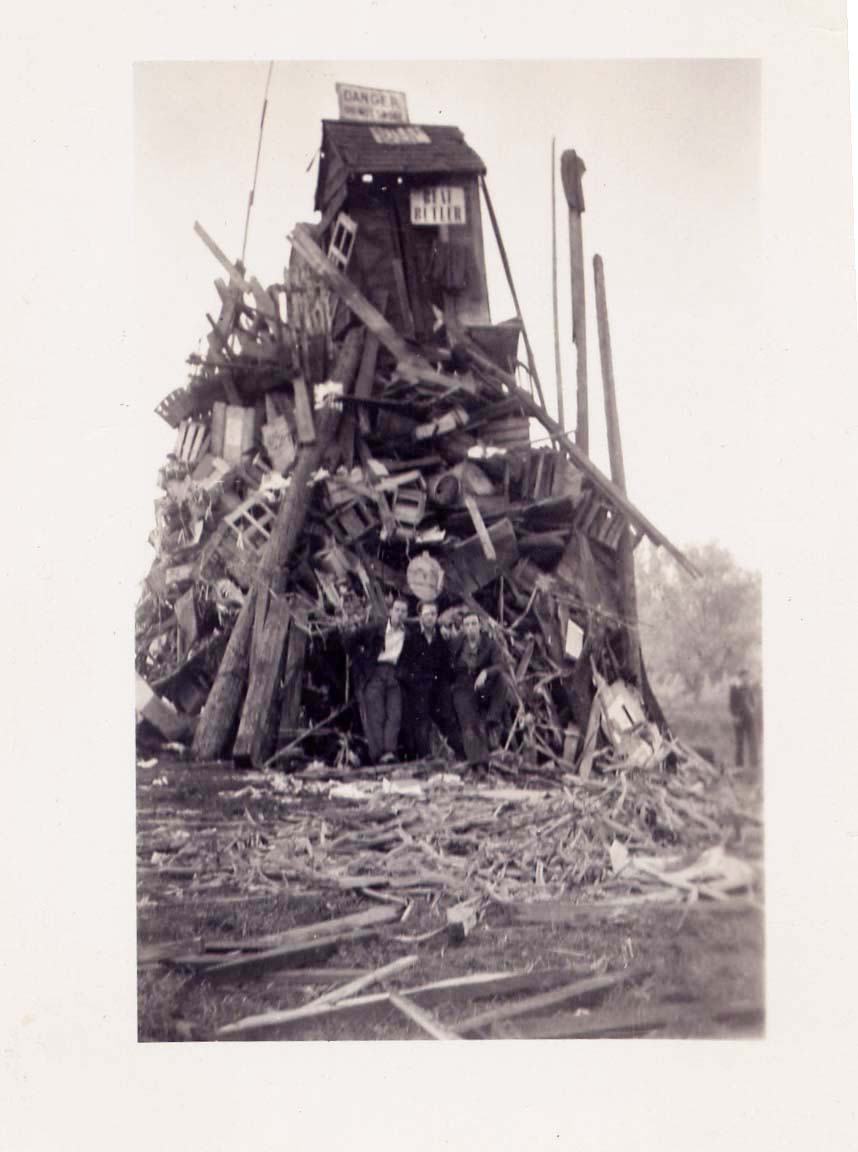 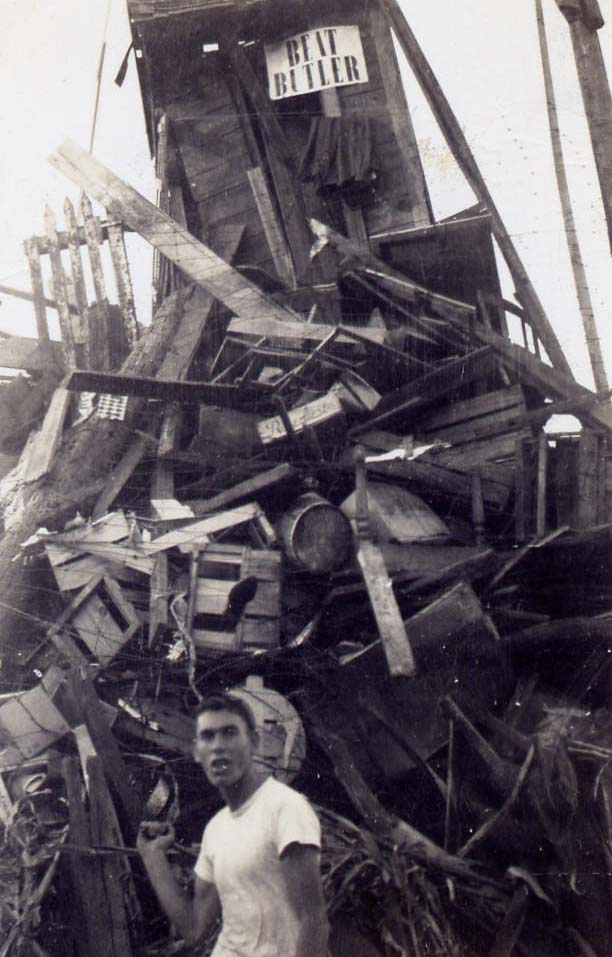 This photograph gives us a closeup view of the contents of the pile. Odd bits of lumber, packing crates, fruit baskets, old tables and the traditional topper – an old outhouse. Always an old outhouse! While we of the future would like to think that all of this junk was donated – a sort of a wooden equivalent of our modern toxaway day – it was almost certainly not true! Freshman would prowl the alleys of town looking for any old thing that might burn and helping themselves.  However this little nugget from The Bachelor of  November 3, 1922 tells us a bit more about the restitution which was required, “In years past it has been customary for the freshmen, in their determination to provide a record-breaking bon-fire, to make away with those old-fashioned shanties which furnished the inspiration for one of Riley’s unprinted poems. In doing this, they frequently were not very particular whose they took. Each time, however, that they have got away with them, they were required to settle with a nice sum of money. It is well to warn freshmen that Chapel collections become monotonous, and that it is better to spend the money in helping to pay for band uniforms.” 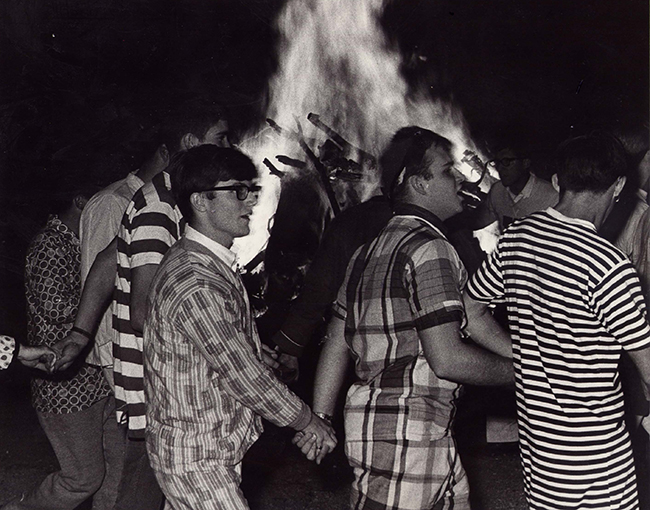 This photo shows a later tradition where the freshmen were required to wear their pajamas, chant around a bonfire and attend a pep rally at the courthouse in downtown Crawfordsville.

Here are some great shots of that. 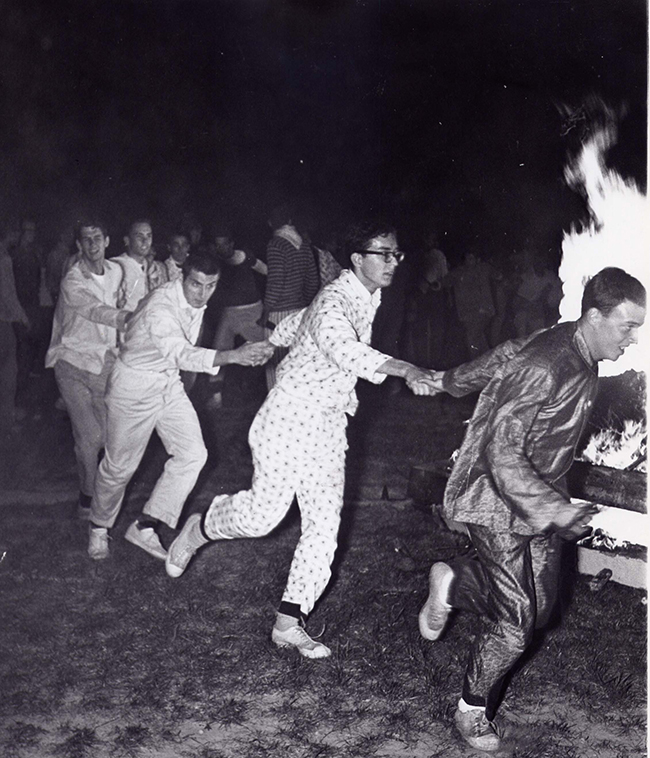 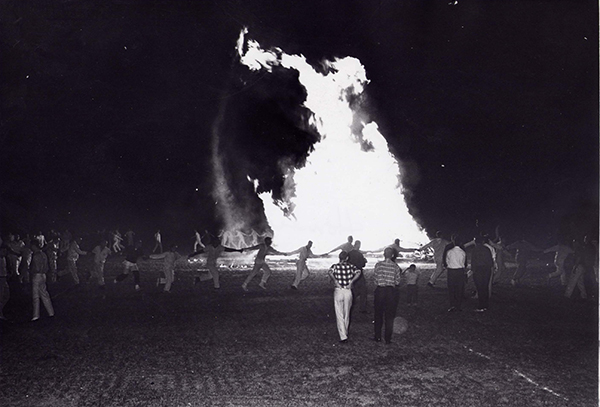 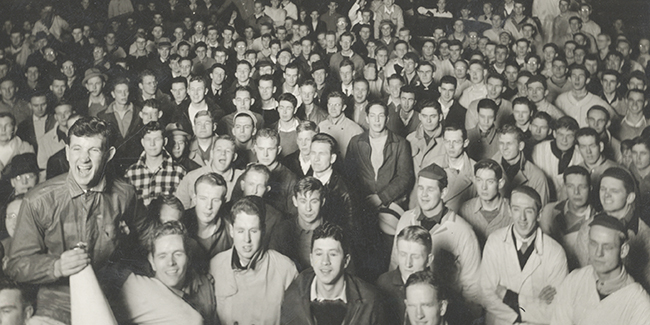 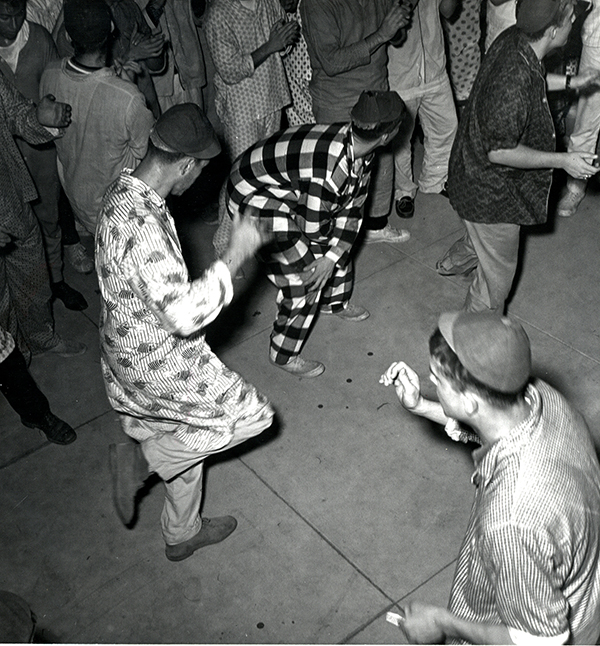 Chapel Sing is a long lasting tradition that has changed over the decades, here is a quick look at Chapel Sing in the early part of the 20th century.

And what would homecoming be without decorations? Here are a few really good ones…

And one of the earliest efforts…

Here are a couple of great old pictures from the early 1920’s. Spirits were high and in the first picture below we can see the band doing its part to add to the festivities.

To close this Homecoming hoopla, here are a few great invitations, inviting everyone back to campus. Homecoming is a great tradition and one we embrace with wholehearted gusto!

Here are two links about Don’s work, both while a student and then afterward as he served in the Army.

I hope you have enjoyed these views of Homecoming over the decades. It is a great tradition and a nice time to welcome back members of the Wabash family.

COMMENT from David Morgan – Director of Campus Service here at Wabash regarding the man sweeping the Chapel floor:

I was immediately caught because I knew I had seen this gentleman in other photos, but I did not know who he was.
We still have a few 30+ year people around.  This is Montgomery “Mont” Starnes.
He was born on 11/11/1918. He attended school in Waveland and continued to live there as an adult. He was a WWII veteran of the Army Air Corps where he was an airplane mechanic. His father (Vernon Starnes) had a blacksmith shop in Waveland. He began work at Wabash in June of 1969. His son, Chet Starnes, also worked at Wabash in Campus Services. His grandson Dustin attended Wabash for a short time.
Mont retired from Wabash in 1984. He passed away in 2014.
A Man and his Mandolin
BELL GAME! BELL GAME! BELL GAME!