A Man and his Mandolin

One of the many duties of an archivist is the creation of historical exhibits. Each semester a new one is needed. I usually try to tie them to upcoming campus happenings or historical events on campus. This semester the exhibit is about the glee club, ahead of the club’s reunion this fall. Among the greatest pieces in our archive is an instrument from the era when the biggest musical organization at Wabash was the glee and mandolin club. To learn more about the man, I turned to the Wabash Magazine of 1909. It was a tradition that each member of the graduating class had a profile created for them in the Senior issue of the magazine. From Hurt’s profile, which was not written by him, we learn several things. His nickname was “Doc” perhaps due to his wish to follow in his father’s shoes. The profile notes that he planned to attend medical school following graduation. Hurt was also athletic and won his baseball “W” when a sophomore. This is an indication of his prowess on the diamond in only his second year. As to his musical life, from the profile, “He is an exceedingly musical fellow and made a reputation over the state as the famous glee club man. He has been a member of the Glee and Mandolin Clubs and the Glee Club Quartette [sic] for the last three years, and was the director of the Glee Club during the past year. On the trips the girls were enraptured by his beautiful countenance and Apollo-like form. Still he has maintained a quiet dignity through it all…”

That is really quite a write-up!

After he left Wabash, Hurt studied medicine and became a surgeon in Indianapolis. Still, he always kept a special place in his life for Old Wabash. He led a life of quiet dignity, one of service to his community and loyalty to his alma mater. As a measure of his devotion, the family established an award in his name, the Paul T. Hurt Award for Freshman Achievement, first given in 1950. The list of award winners reads like a Who’s Who of Wabash men and is still offered today. 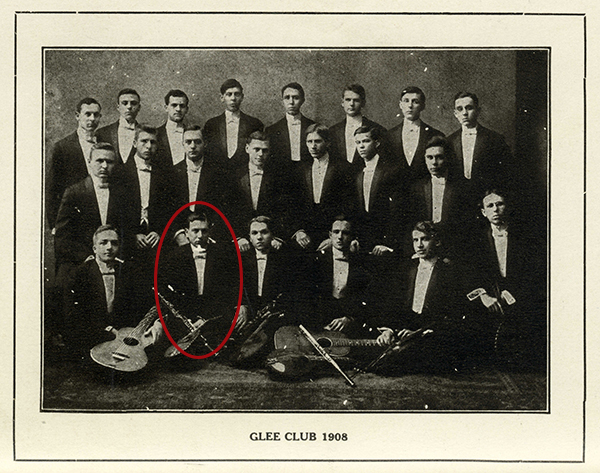 The mandolin in our display is the same at that pictured above in the Glee and Mandolin Club photo of 1908. Here is a closeup of Hurt and his instrument.

This beautiful instrument was given to the College nearly a hundred years later, in 1994, by Hurt’s daughter, Nancy Hurt Diener. This is the description of it, “Pear shaped body with light ribbing on bottom; raised wood decoration at bottom of mandolin; lower body is dark wood, upper body of light wood with inlay around edges and in center; neck and peg board are made of light wood on underside, dark wood on top; “3” on underside of neck.  Dimensions: 25 1/4″ x 7 3/4″ (widest part of body).” As it is so distinctive, there really is no question that we have the same instrument.

You may have noticed the handwritten score of “Old Wabash” for the mandolin in the picture of the exhibit above. Here is a closer look. 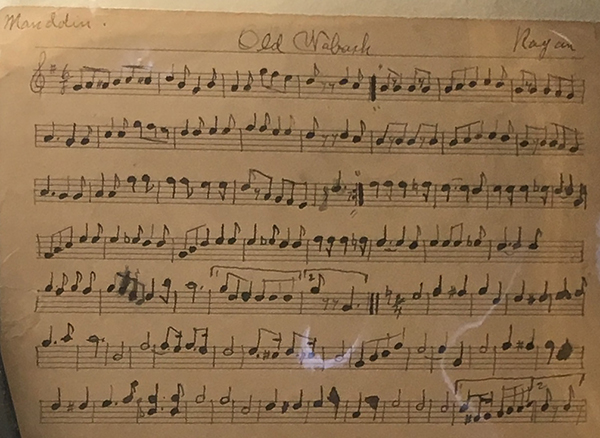 As to Hurt and his mandolin, we have no idea if he kept playing it, but we do know that he treasured it enough to keep it with him and pass it along to his daughter. We also know that she valued it highly and sent it to Wabash for safekeeping, which we have done and will continue to do. It is such a pleasure finding these little threads in the rich tapestry that is Wabash. President Trippet coined this metaphor and I agree that it is a complex and beautiful weaving. So many threads and so many great stories to share!

Funkhouser – a jokester AND an academic
Homecoming – a time to reflect