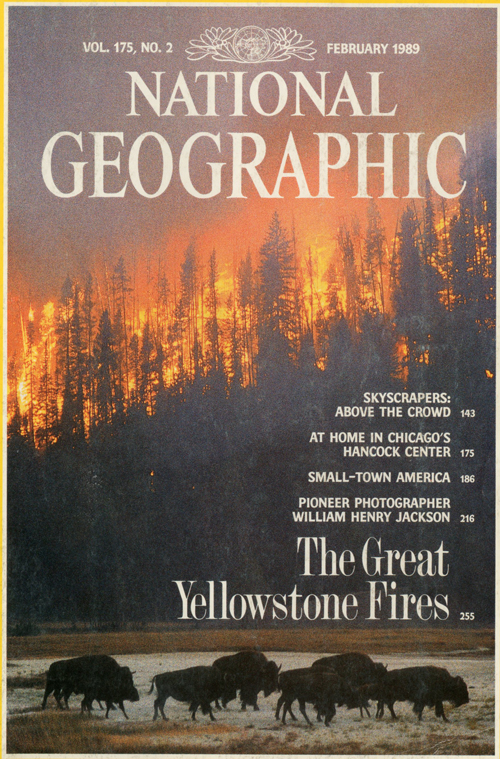 Old copies of the National Geographic always pose such a quandary – sure they are just magazines that might have been recycled long ago, but they are also strangely compelling. So while clearing out a set of bookshelves prior to painting our living room, we were faced with the old question, pitch or keep. We recycled all but one issue – February 1989 with the cover story, “The Great Yellowstone Fires” which is of particular interest to my husband who worked in the park all during the fires.  Also included in that issue was a piece on William Henry Jackson, the photographer for the Hayden Expeditions of the 1870’s, and there it was, another Wabash connection!

Jackson was recruited by Hayden to provide scientific documentation of the expedition. Funded by Congress, Hayden was to explore the Mountain West and report back. While in Omaha, Hayden saw Jackson’s photography of the surrounding area and of the Native Americans in the area. It was clear that the new technology of photography would be of tremendous value to Hayden’s plans. Jackson packed his supplies – which included hundreds of glass plates – and walked into history. For more on Jackson – the Scott’s Bluff National Monument has a nice biography page – http://www.nps.gov/scbl/whj.htm.

Jackson’s photos are widely credited with securing the vote in Congress to designate Yellowstone our first national park. At the conclusion of the expedition, Jackson went to Washington, D.C. to create sets of the photographs for Congress prior to the historic vote. 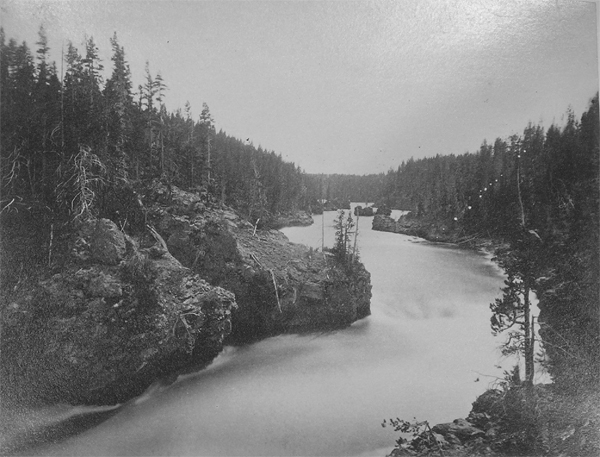 From our collection we see this photograph of the Yellowstone River above the falls of the Canyon. Note the water which appears misty and almost cloudlike – due to the long exposure time required.

We have, here in the Archives, over 100 of Jackson’s photos from that expedition and others in the mountains of the West. They are amazing and in quite good shape. A wonderful collection first brought to my attention by another great photographer, Paul Mielke who had done quite a bit of research on the collection. The photos range from Yellowstone down through the Tetons to Estes Park to Salt Lake City and even include a photo of the Mormon Tabernacle. There are pictures of Native Americans taken just before the coming of the railroads, beautifully heartbreaking because we know that in less than a decade, these people would be forced out of the way of “progress” and onto reservations. These pictures document the land as it was, naturally rugged and full of amazing sights – lakes that smoke, holes that shoot boiling water hundreds of feet in the air. What a delight to see these photographs and to think about the difficulties of taking them in the field. All that glass and creating a darkroom in a tent on the side of a mountain? Amazing! 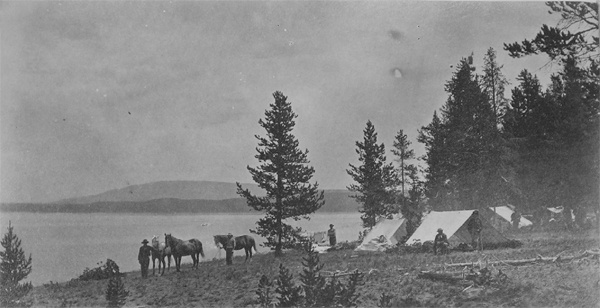 Another image from our collection is this photo of the Hayden camp on Yellowstone Lake.

The question then becomes how did Wabash get these amazing photographs? The answer, I think, is that they came here with John Merle Coulter, a member of the faculty from 1879-1891. Initially trained as a geologist at Hanover College, Coulter was offered a position on the Hayden Expedition as an assistant geologist. The men of the expedition had all gathered and were waiting for Hayden to arrive. As might be expected from a bunch of tough guys in a camp setting, they played cards and drank while waiting. Not for Coulter, raised in his grandfather’s strict Presbyterian home, he neither played cards nor drank. To pass his time he collected specimens of the plants he found in the area. His work caught Hayden’s attention. Suddenly botany was added to Coulter’s duties.  Also, on occasion, Coulter helped Jackson with his work. When Jackson was called to Washington to print the photographs, Coulter was also in D.C. cataloging his specimens. I believe that these photographs were given to Coulter by Jackson and left at Wabash by Coulter.

For a complete biography of this beloved member of our faculty, follow this link to the National Academy of Sciences online biography project: http://www.nasonline.org/publications/biographical-memoirs/memoir-pdfs/Coulter_John.pdf

So there it is, Wabash and Yellowstone and a faculty connection. Of course this is not the only connection – former Treves Professor at Wabash Dr. David Krohne has done a lot of research in the Yellowstone area. Here is a link to a Wabash Magazine story about Krohne’s visit to Yellowstone after the fires:

Here is a link to a student blog about a visit to the park and Dr. Krohne teaching in the field:

I received this email from Nancy Doemel who rightly points out that I omitted another faculty connection to Yellowstone.

I’m disappointed that you skipped right over the earlier (maybe earliest) immersion trip to Yellowstone.  Aus Brooks and Bill Doemel took at group of 15 students to Yellowstone for 6 weeks where they slept on the ground, did research in a mobile lab they pulled out there, and spent time with some of the biggest experts in Yellowstone biology that worked there. Those 15 students, now alumni, had a huge dose of thermal biology that summer.  I can’t remember whether it appeared in the alumni magazine or not, but your references to it should certainly include that.
Your archives have material in them about the Wabash Aquatic Biology program; it predates Dave Krohne’s work by many years, and over the four year period when Bill and Aus did this 6 week, in-the-field, on-the-ground biology program, it impacted something like 50-60 alumni.  The first summer was in Yelowstone, the next three were in the Boundary Waters Canoe area, the Florida Keys, and the New York Finger Lakes.
Don’t want you to forget Bill’s and Aus’s pioneering work.
Nancy Doemel
And my reply to her informative letter:
Dear Nancy,
Thank you for sending along the additional information. I will post it to the blog along with your comments. You are right that I did not note the immersion to Yellowstone with Aus and Bill, but I didn’t skip it. I simply did not know of it. So apologies for the omission.
Thank you for your addition to the record, Nancy.
Beth
Holiday greetings from 1925
Winter Hardy