Endless winter or the start of the next ice age? Either way it is cold here in Indiana and there is a lot of snow! All of this foul weather prompted a member of the Sphinx Club to ask, “When was the last time that Wabash cancelled classes due to the weather?”

Good question! To start the research, I thought I would go back to the worst winter I remember in Indiana, 1978. To my astonishment classes were NOT cancelled in ’78. Here is what I found as I tracked back through the Bachelor.

The year is 1977 and this story starts with registration for classes in the midst of a cold snap. The Bachelor of 01/21/1977 reports that despite “sub-zero temperatures” the process clicked along smoothly. In the last part of the story Bachelor Staff Writer Rick Hemmerich reports that when asked if Wabash might cancel registration and classes due to the bad weather, Dean of Students Norman Moore replies, “This isn’t a boys’ school, this is a MEN’S school!!” 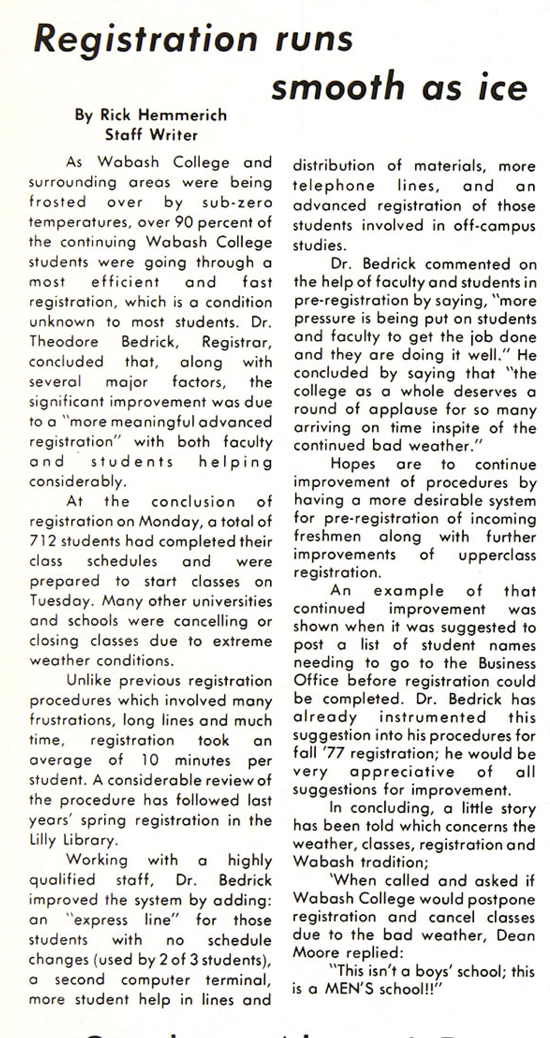 Within two weeks of that article, the school cancelled classes on a Friday. The headline of that piece read, “Brrrrr!” with a subhead of, “Elmore Day at Fifty Below.” Elmore Day was a lovely day in the fall when President Seymour cancelled classes unexpectedly.

For more information on Elmore Day follow this link to a blog posting on that subject:  http://blogs.wabash.edu/dear-old-wabash/2010/02/11/sassafras-oh-sassafras%E2%80%A6/

The conditions in 1977 were just awful, blowing snow with winds of 45-60 mph causing a wind chill factor of 65 degrees BELOW ZERO. This article by Jim Garrison tells the full tale. There were worries about natural gas supplies, exhortations to turn down the thermostat, and calls for businesses to cut back on gas usage. It seems clear that this would have played into any decision to cancel classes.

The next year is the one I remember so clearly, the Blizzard of ’78 was a big one with loads of snow, plummeting temperatures and wind, lots of wind. In the days before the internet, we played cards and games and stayed inside for days. Yet classes were not cancelled at Wabash. 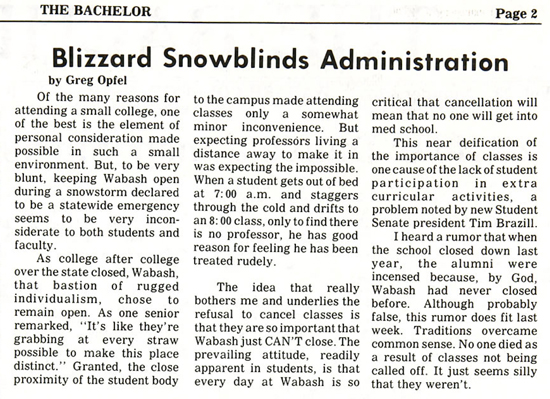 A story from the Bachelor of February 3, 1978 by Greg Opfel entitled, “Blizzard Snowblinds Administration,”  notes that the closure of the previous year flew in the face of the Wabash tradition of hardy, self-reliance. It was widely supposed, true or not, that the alumni put pressure on the administration not to cancel classes again. The article ended with a note of outrage for those students who did struggle into their classes only to find that the professor was absent.  An announcement in the faculty meeting of February 20, 1978 read, “Dean Moore announced that the Student Senate had expressed dissatisfaction that the college did not cancel classes during the late January blizzard. He added that students had been particularly provoked who made the effort of getting to class only to find that the instructor was absent. Dean Moore suggested that in the future faculty unable to reach the campus might telephone WNDY early in the morning so that this information could be broadcast.”

Four years later a January cartoon by John Van Nuys from 1982 reinforces the idea that, “Classes must go on!” 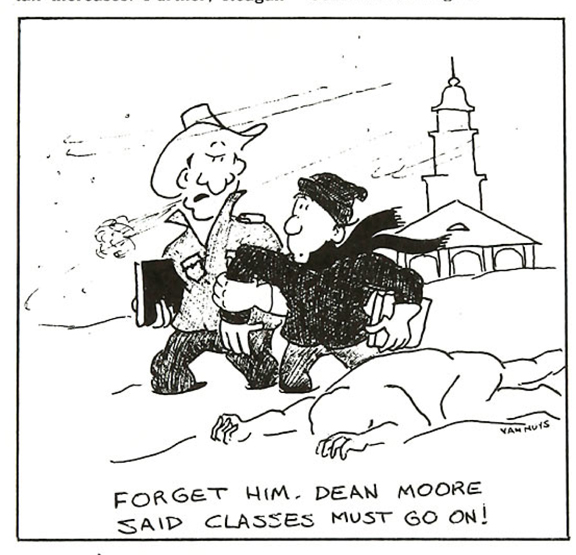 In January of 1994 there was another frigid weather event. Record cold temperatures with a wind chill factor of -50 degrees prompted Purdue and IU to cancel classes, but again, not Wabash.  Writer Chris Rowland did his historical research citing the 1977 and 1978 events and he ended with Dean Moore’s quote from above about Wabash as a “men’s school.”

In January of 1997 there was another bad storm and in the Bachelor dated 01/23/1997 there was a discussion as to why classes were not cancelled. The writer, Jon Matsey, interviewed long-time faculty member and Wabash man Paul McKinney [W1952] about the 1977 closure. “Classes were called off. Much joking existed because of the closure. Doubt was cast on the robustness of Wabash men according to the punsters. Never before had such a thing happened! The Dean of Students, Norman Moore, argued that it was better to hold class because, otherwise, students got into mischief…”  The article continued with a discussion of the mechanism for cancelling classes, noting that Wabash is a residential campus and less subject to road conditions. There was commentary on the snowy, ice covered walks, but the article ended with this sentence, “Nevertheless, Wabash students seem almost to revel in the fact that they do not easily succumb to fluctuations in the weather.”

Winter storms come and go and January is usually the worst month for such weather. Bachelor stories of freezing temps, heavy snow and strong winds are common in that month across the years. One line runs through them all, classes are not cancelled at Wabash. With this in mind, it was notable that earlier this January, during the Polar Vortex, Wabash did close its doors.  The county declared a snow emergency asking everyone to stay off of the roads, period. But as class was not yet in session, the 37 year streak continues.

I close by saying that this winter Campus Services has worked away, often late into the night, trying to keep the roads and walks cleared or at least passable. Sometimes that involved starting at 3 or 4 a.m.  It has been a long winter and the folks at Campus Services deserve a big thank you for their hard work!

Here’s hoping that we will soon move into spring!

In the meantime, take care and stay warm!